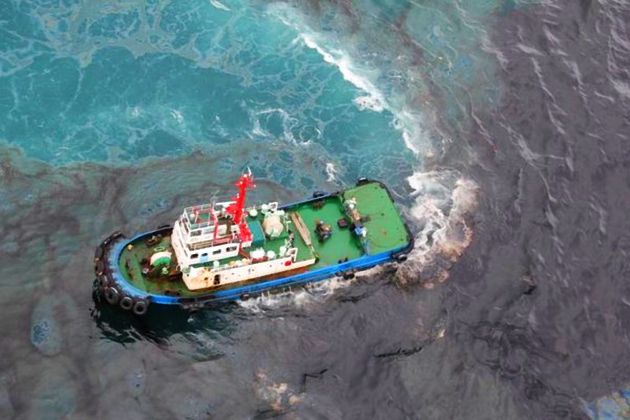 Boats spraying dispersant sail directly into the 50,000-litre drifting oil spill, as experts battle to clean up the ocean before the oil slick hits the Rayong beaches. (Photo courtesy of Royal Thai Navy)

"An initial survey by the department has indicated the oil spill has affected coral reefs in shallow water and it could take more than just a few years to rehabilitate the affected areas.

"Thon Thamrong-nawasawat, a marine science expert at Kasetsart University's faculty of fisheries, said most coral reef in Ao Phrao is hump coral which grows very slowly at 1-4 centimetres a year.

"The oil slick has also affected small fish living among the coral. These species cannot swim far from their habitats and were among several marine animals in danger.

"Ao Phrao is the most important coral site on the western side of Koh Samet. We don't know how long it will take to recover from the impacts of this spill and how much damage has been caused there."

See photos of the oil slick on the beach at Koh Samet, panoramic photo here.

PTT Global Chemical Plc (PTTGC) chief executive Anon Sirisaengtaksin made a formal apology, admitted the company "underestimated" the extent of the oil spill which "sneaked out" of the contained area. The company is insured for US$50 million (1.55 billion baht) (read here).

In 2009, another PTT subsidiary was involved in the Montara oil spill, one of the Australia’s worst oil disasters, in the Timor Sea off western Australia. 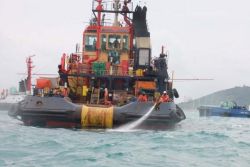 Oil spill dispersants were deployed from a hastily assembled flotilla of ships and boats from the Royal Thai Navy and other sources, in an apparently successful effort to stop the slick from reaching shore. (Photo by Panumas Sanguanwong).

PTT ... and at least 300 navy soldiers are cleaning up the damage caused by an oil slick that has polluted Ao Phrao beach on Samet island.

...on Monday the oil entered the bay and washed up on the  beach at Ao Phrao, on the western part of the island, on Sunday night.

The oil slick has affected the entire beach of the small bay. PTT personnel... and navy ... deployed to the area on Sunday were cleaning it up. It was hoped the clean-up would be complete later on Monday...

Clean-up crews were also working to further contain the main slick and prevent it moving to Phae beach on the mainland of Rayong's Phae district, as the wind is moving it in that direction...

... the oil slick that washed up on the island is about one-tenth of the 50,000 litres of oil that leaked into the sea on Saturday off the eastern coast at the Map Ta Phut industrial estate in the province.

A Samet park official said tourists were evacuated from Ao Phrao. Other beaches on the island were unaffected...

The oil slick was caused by a leak in a PTT pipeline carrying crude oil being unloaded by an offshore tanker to its refinery about 6.50am on Saturday.

The leak location is about 20 kilometres southeast of the Map Ta Phut industrial estate.

..the leak occurred in the pipeline at a single point mooring.

A single point mooring is an offshore-anchored buoy used as a device to transfer oil from the sea to a tanker. 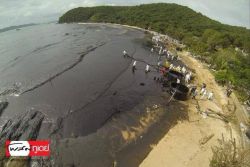 It is attached to the tanker to prevent it from drifting during the transfer process.

The company said the incident occurred as an oil tanker transferred crude oil via the buoy to supply to the company's oil refinery on the shore.

Shortly after the leak, workers rushed to close the valves of the oil pipeline immediately to stop any further leaks.

A 200-metre-long boom was placed around the floating oil to prevent the oil slick from spreading further.

Workers also used oil skimmers to remove the oil and put it in containers on board the ship.

Four ships were deployed to spray about 35,000 litres of oil-spill dispersants to clean up the oil slick on the sea surface...

Sitala to stay in K-pop group