Oil spill clean-up chemicals: What are they? 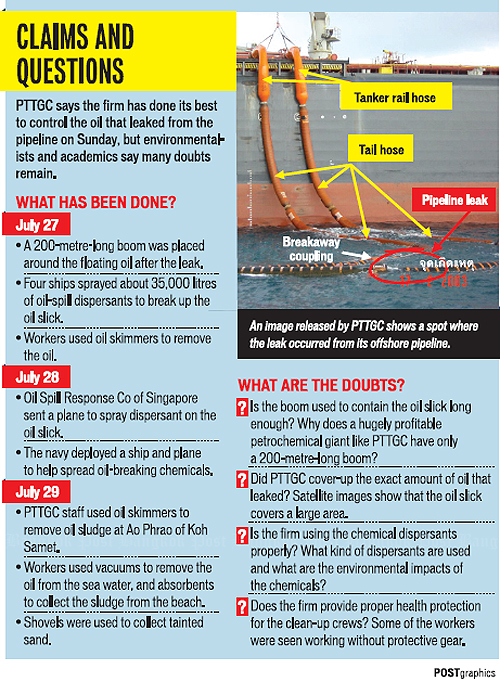 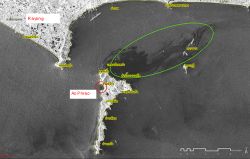 Experts are worried the chemical dispersants being used in the oil spill clean-up operation in Rayong province could cause environmental damage.

They have urged PTT Global Chemical Plc (PTTGC) to reveal what type of dispersants are being used.

PTTGC has remained silent about what chemicals it is using but also said they could pose a hazard to the environment and people's health.

"There is no option," Mr Wichian said. "The massive oil spill and windy conditions prevent us from using booms to contain the spill.

"Dispersants are the last resort in this situation."

Lack of information about the chemicals has prompted experts to pressure authorities and PTTGC to provide more details.

"It's important to know what chemicals they are and how much is being used so we can decide on measures to prevent possible negative impacts," Arpa Wangkiat, a professor at Rangsit University's environmental engineering department, said.

"Don't leave questions to society. Disaster management should not be left in the hands of one participant."

Ms Arpa said her studies have found the use of dispersants can result in environmental damage and health problems.

Environmental activists suspect PTTGC might be using Corexit to tackle the Rayong oil slick because it is commonly used worldwide.

In 2012, a study found that Corexit increases the toxicity of oil by 52 times. It can remain in the ecological food chain for many years and cause widespread and long-lasting health impacts.

"The use of dispersants is a solution that creates new and worse problems," Ms Arpa said.

The main ingredients of Corexit include 2-Butoxyethanol which can comprise up to 60% of the dispersant and is known to harm the blood, kidneys, liver and central nervous system.

Experts say the substance can also cause cancer, birth defects and has been found to cause genetic mutations.

It is also a delayed chronic health hazard as well as an environmentally hazardous material.

Pornsri Mingkwan, directonr of the Pollution Control Department's marine environment division, said PTTGC has sought permission to use 32,000 litres of a dispersant called Slickgone NS since the spill occurred on Saturday.

However, the dispersant is ineffective in tackling oil slicks more than 48 hours after a spill occurs, she said.

Thon Thamrongnawasawat, a leading marine biologist at Kasetsart University, wrote on his Facebook page that the use of dispersants should be avoided in seas where the water is about 20m deep or less.

This was because dispersed oil could come into contact with the sea bed and cause negative effects on the benthic organisms that live there, he wrote.

He called on the authorities to check the depth of the sea off Rayong.

He also urged authorities to clarify which agency had allowed the use of dispersants on Sunday.

Pisut Painmanakul, also of Chulalongkorn University's environmental engineering department, said the Rayong oil spill could lead to a similar problem which occurred in the Gulf of Mexico in 2010 when Corexit was primarily used to deal with the Deepwater Horizon oil spill.

Officials took three months to deal with the oil slick there but scientists have said the toxic chemical remains in the ecological system.

Samai Kungsaworn, director of the Office of Diseases Prevention Control 3 which oversees Rayong, said local health units have reported four patients complaining of dizziness since the oil spill on Saturday.

The cases could possibly be linked to the oil's pungent smell in the area, he said.

He has advised locals to stay away from the shore because the smell could cause respiratory problems.