Six amnesty bills this time. 25 in 81 years of Thai democracy. Who gets amnesty in each version? 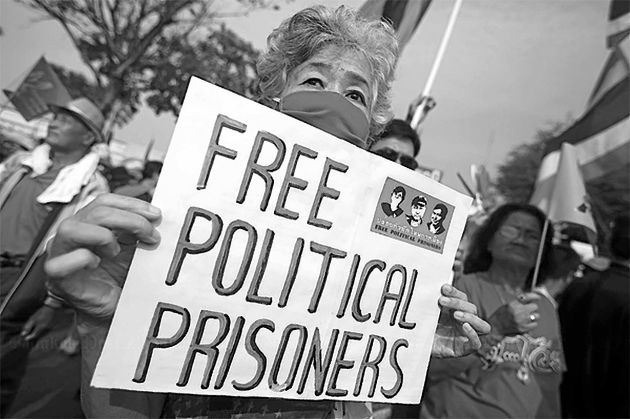 A political group rallies for the release of political prisoners earlier this year. An amnesty law will need to be accepted by all sides of the political divide before a breakthrough can be achieved. PATIPAT JANTHONG

The different amnesty bills, although they vary in detail, cause similarly large levels of public anxiety. The problem is not the legal loopholes in each version, but the fear that, given the highly polarised politics involved, the government's amnesty push could lead to a deadly collision.

As Pheu Thai Party MP Worachai Hema's amnesty bill goes before parliament this week, it does so amid the Yingluck Shinawatra government's declining popularity, a new round of protests to topple the so-called proxy government of Thaksin Shinawatra, and rising political tensions reflected by the invocation of the Internal Security Act (ISA).

If anything, this shows that Thailand is still crippled by fierce conflicts over the ever-divisive Thaksin when the country badly needs to move forward.

The Pheu Thai Party cadres believe the new protest wave is part of a concerted effort by the old powers to stop the government's 2-trillion-baht infrastructure overhaul and the 350-billion-baht flood-prevention schemes.

If they materialise, these schemes will seriously undermine their old power and voting base, since the next election is anticipated as early as next year.

Though these claims are debatable, I would like to stress that we need to think clearly about the amnesty issue without being haunted by the "Thaksin ghost". It is normal for any society facing political violence to resort to amnesty laws to pave the way for a political breakthrough.

In Thailand's 81 years of democracy, we have had 25 amnesty bills, which includes the first one in 1932 and the most recent one in the form of a decree in 1992.

The majority of these amnesty bills aimed to free coup makers. The exceptions were those designed to free protesters, rioters and communist sympathisers involved in the October uprisings of 1973 and 1976.

The amnesty bill debate set for tomorrow is just the latest effort to absolve people from politically motivated offences.

Many people, however, still believe an amnesty might impede efforts towards political reconciliation.

Certainly, the prerequisites for reconciliation are that all players involved in a conflict must be prepared to give true and convincing explanations of why things happened the way they did in the leadup to political violence.

But I believe an amnesty is a necessary short-cut to alleviate the unwarranted suffering of those who took part in anti-government protests and were forced to resort to violence to counter the use of force by the state. This applies to both the yellow- and red-shirt camps.

What really happened and whether the violent protests were justified are subject to investigation.

What is important is to end the culture of impunity. The security forces can no longer think they can use excessive force whenever it is convenient.

In fact, the push for an amnesty bill is a political necessity for the Pheu Thai Party; it needs to show gratitude to its loyal supporters who are now locked up in prison or struggling with lawsuits.

There are six versions of amnesty bills altogether.

The first bill offers a blanket amnesty to all concerned parties. It was proposed last year by 2006 coup leader Gen Sonthi Boonyaratglin.

The Niyom Worapanya version, meanwhile, is more extensive by including the Sept 19, 2006 coup makers and those affected by the coup-appointed Assets Scrutiny Committee, as well as security officials who dispersed the protesters in all demonstrations after the coup.

The Nattawut Saikuar (United Front for Democracy against Dictatorship, or UDD) version echoes the desires of the foot soldiers not to grant an amnesty to core leaders, be they from the Abhisit government, the UDD, or the People's Alliance for Democracy (PAD).

It also specifies that the amnesty would not cover those charged with terrorism and killings.

The Chalerm Yubamrung bill is seen as a ploy to bring Thaksin Shinawatra home because it benefits all parties.

The Worachai bill is the one that has received the official support of the ruling party. But the relatives of those killed in the April-May 2010 crackdown, led by the mother of a volunteer medic and the father of a slain teenager, have also come up with their own proposal, which would not grant an amnesty to those who intentionally damaged private or state property, or who killed protesters or state authorities.

A clearer picture now emerges. An acceptable amnesty bill is one that frees the victims of violence, but not the instigators, be they state officials or armed protesters.

The amnesty short-cut is necessary because the present judicial process cannot produce justice. This is what many red-shirt supporters feel strongly about. While many of them are still behind bars, those who have been released on bail are still having to struggle with protracted lawsuits.

It should be noted that none of the amnesty proposals dare cover those charged with lese majeste offences.

If the amnesty bill debates focus on help for grassroots supporters, not the elites of various political factions, this would help pacify the sense of injustice among many red shirts whose animosity and distrust toward the government and the ruling classes is growing fast.

With less resentment and no more political ploys to exacerbate the political divide, reconciliation is possible.

If the Democrats think they can foil the amnesty effort by walking out of parliament, hoping for a House dissolution or military intervention, they need to think again.

Without the Democrats, parliament is still able to proceed, since there remains a quorum _ at least with the Bhumjaithai-Matubhum parties _ to constitute a legally-functioning parliament.

The calls for military intervention from anti-government groups have been met with public disapproval. Some might resort to violence.

But if the government keeps a cool head, violence can be averted.

But there are loose canons in the red-shirt movement, too. The movement leaders now lack unity and are competing against one another for ultimate recognition from their leader-in-exile. The last thing they should do is to mobilise their rural supporters to confront the anti-government protesters. That is a recipe for disaster.