House deliberation of amnesty bill starts at 1pm with plans to pass first reading by 11pm. March to parliament called off after police opposition. 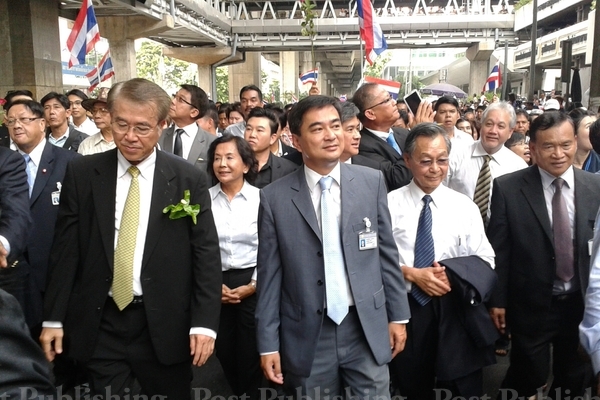 The House of Representatives has begun to deliberate the amnesty bill proposed by Pheu Thai MP Worachai Hema for the second day.

MPs of all parties were in attendance when the debate resumed. Security was still tight, although there were no protesters gathering outside parliament.

Before the meeting began, Mr Worachai said he believed his bill would pass its first reading by 6pm on Thursday.

The Democrat Party is vowing to resume its mass rally once a government-sponsored amnesty bill reaches its third reading.

Thailand's stocks are falling at the fastest pace in Asia as parliament debates on an amnesty bill spurred protests in Bangkok and threatened to delay the country's biggest-ever infrastructure spending plan.

The SET Index, which rose 328% from October 2008 to this year's high on May 21, has since dropped 13%. Stock swings have almost tripled in the past six months while trading volumes fell 52%, the most among 45 emerging and developed markets.

The Constitution Court on Wednesday refused to accept for consideration a petition asking it to order the lifting of the Internal Security Act and to rule whether the cabinet had violated Section 68 of the charter by imposing the ISA in three Bangkok districts from Aug 1-10.

The petition also asked the court to ban the prime minister and cabinet members from politics for five years and dissolve the Pheu Thai and other coalition parties for the imposition of the ISA.

The court rejected the case, ruling that the cabinet had acted lawfully.

The Constitution Court also rejected a petition filed by Malairak Thongchai, core member of the People's Radio Media for Democracy, that it rule whether the People's Force for Democracy to Overthrow Thaksinism (Pefot) had broken the constitution by planning to lay siege to parliament on Aug 7, and to order Pefot to call off its protest rally.

The court ruled that Pefot had exercised rights under the constitution to stage a peaceful rally and had not violated Section 68 of the charter.

Update #2: Five people were arrested on Wednesday for violating the Internal Security Act (ISA) by trying to break through a police cordon into a restricted area, the Centre for the Administration of Peace and Order (CAPO) announced.

After most of the Democrat supporters dispersed, about 200 continued to gather at the Ratchawithi intersection and some tried to provoke police into taking action, and to break through the police cordon into the restricted area.

Five of them were arrested and taken to Region 1 Border Patrol Police headquarters in Pathum Thani for detention and questioning.

About 400 protesters of the People's Force for Democracy to Overthrow Thaksinism (Pefot) were still encamped at Lumpini Park peacefully and had not moved to anywhere.

The Democrat Party leaders decided to tell their supporters to disperse and return home after police refused to allow them to march beyond Ratchawithi intersection and accompany their MPs to the parliament.

The decision was made  about 12.10pm and Democrat MPs proceeded to parliament to attend the House meeting, which was scheduled to begin at 1pm.

Mr Suthep said the party still had a long battle to fight and promised to continue to be on the people's side.

Democrat Party leader Abhisit Vejjajiva on Wednesday morning led around 2,000 people in a peaceful march to parliament in protest against the amnesty bill.

The amnesty bill protesters planned to walk from Urupong intersection to Rama VI, past Ramathibordee Hospital to the Tuk Chai intersection, then past Dusit Zoo and onto the parliament building compound.

Democrat MPs insisted before the walk began that if they come to a point where barriers are set up, they would negotiate to try to get through, but would tell their supporters to accept it and disperse if their requests were rejected.

Mr Abhisit said before the march that his party and its supporters oppose the parliamentary deliberation of the amnesty bill, because it is a law that would destroy the country’s legal system.

The amnesty bill, to be introduced in its first reading to the House of Representatives at 1pm Wednesday, is aimed at whitewashing people who have violated human rights, he added, warning that any move to pass the law could lead to violence.

“I want Prime Minister Yingluck Shinawatra to call off the plan to table the amnesty law to the House meeting for consideration today. If she does this, everything will end.

“The premier should instead open a stage for discussions involving all parties to discuss ways to move the country forward.

“She should also step in to hold talks with all sides because the current political conflict is caused by the efforts to push ahead with the amnesty bill, not because of a failure of political development. Therefore, political reform is not the solution,” he said.

Around 50 Democrat Party MPs, including Mr Abhisit, spoke last night at a "Stage of Truth'' rally at Urupong intersection in Bangkok. Around 2,500 supporters turned out.

At another rally site, in front of Lumpini Park, the People's Democratic Force to Overthrow Thaksinism (Pefot) showed no signs of readiness to move to the parliament by mid-morning Wednesday.

Pefot coordinator Thaikorn Polsuwan said Wednesday morning that the group would first observe the movements of police along possible routes to parliament.

The amnesty bill proposed by Pheu Thai MP for Samut Prakan Worachai Hema should be passed in its first reading with at least 299 votes, chief whip Amnuay Klangpha said on Wednesday.

Mr Amnuay said whips had been coordinating with coalition parties to make sure all government MPs attend the House meeting to consider the bill.

The meeting is set to start at 1pm.

He said he expected the bill to sail through its first reading with at least 299 votes by 11pm tonight. 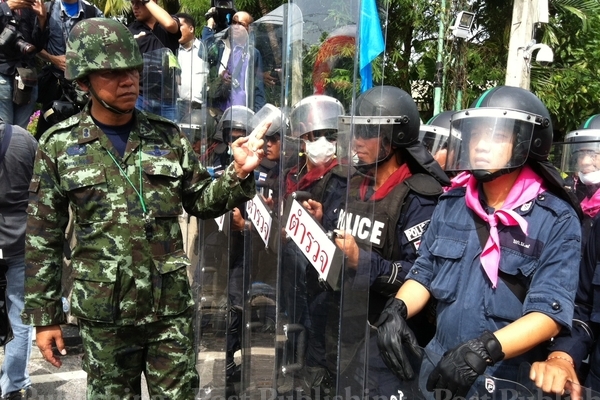 Security officers are stationed along the road leading towards parliament. (Photo by Thanarak Khoonton)