Pandemonium and protests among bickering lawmakers marred parliament's debate on constitutional amendments yesterday with both sides hoping for a smoother session today. 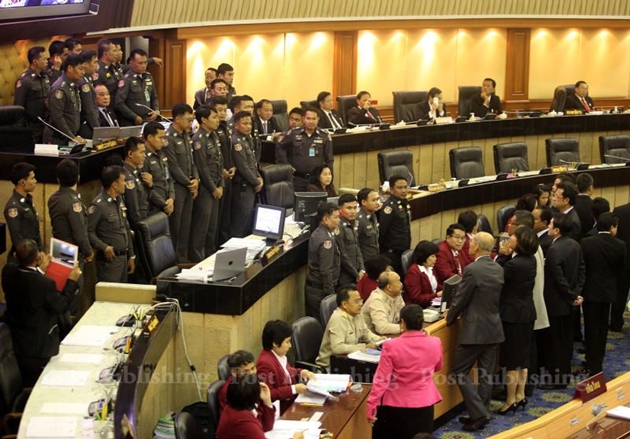 Parliament President Somsak Kiatsuranont is difficult to see as he is surrounded by police preventing angry Democrats from approaching him. PATTARAPONG CHATPATTANRASILL

Police called in to break up scuffle in parliament

Pandemonium and protests among bickering lawmakers marred parliament's debate on constitutional amendments in the first day of a joint sitting, which was broadcast live Tuesday.

Parliament's police officers had to be called in to restore order and remove protesting MPs from the chamber. 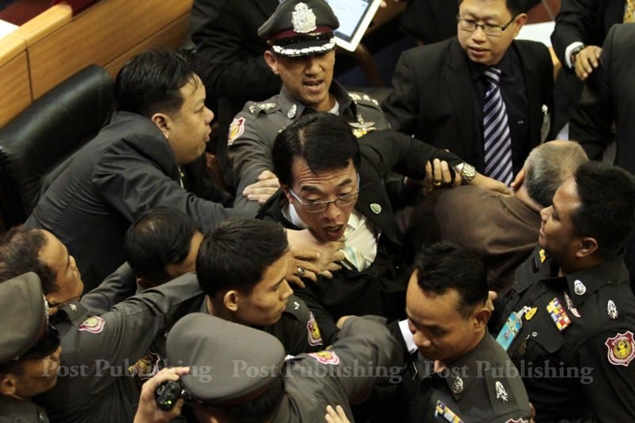 A chaotic scene in parliament as Democrats protest restrictions on their speaking time and the presence of riot police. CHANAT KATANYU


Riot police were later asked to stand by outside parliament in what the Democrat Party described as an attempt to intimidate opposition MPs.

Members of the House of Representatives and senators Tuesday started deliberating the second reading of proposed charter amendments relating to the make-up of the Senate.

Democrats including Boonyod Sooktinthai and Thana Cheeravinij argued that Mr Nikhom had signed in support of charter amendments so it was improper for him to chair the meeting as he could be seen as lacking impartiality.

The atmosphere became tense when Mr Somsak refused to allow 57 Democrat MPs, who had reserved their right to debate the proposed changes to the charter amendments, to speak.

Samart Kaewmeechai, chairman of the parliament committee scrutinising the amendments, told the meeting earlier that the 57 MPs should be barred from the debate since they failed to adhere to what was approved in the first reading of their proposed amendments.

Mr Somsak said he would allow only two of them to debate. If all of the 57 MPs were permitted to speak, the debate would take the whole day, he said.

The Democrats protested saying that Mr Somsak was trying to strip them of their right to speak.

Mr Somsak decided to call a vote to decide if all the 57 Democrats should be allowed to debate.

The meeting voted 339 against the request by the 57 Democrats, while only 15 voted in support.

However, the Democrats continued protesting until Mr Somsak slammed a wooden gavel on his desk three times and then called in parliament police officers to keep order.

Mr Somsak ordered the police to take the protesting MPs out of the chamber, which led to chaotic scenes and scuffles between the Democrats and parliament police officers.

The situation was threatening to get out of hand so Mr Somsak decided to adjourn the meeting for 10 minutes about 2pm. But when the meeting resumed, disorderly scenes broke out again when Mr Nipit, the Democrat MP for Phatthalung, told the meeting that a company of 150 riot police would be sent in to restore order at the request of Mr Somsak.

The Democrats said they would refuse to cooperate unless the riot police were ordered to leave the premises. The meeting had to be called off at 3.20pm again.

Mr Somsak told the meeting that parliament's security office had asked police to ensure security around parliament, not inside the building. 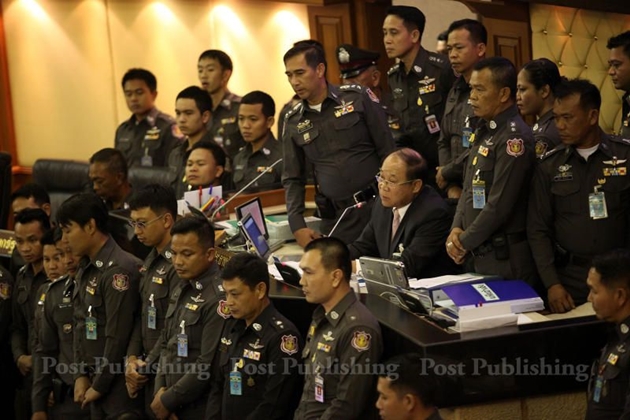 The evening meeting was interrupted by protests and had to be adjourned five times. At around 8pm, the meeting eventually voted by 330 to 6 to approve Section 1 of the bill, that proposed all 200 senators be elected. The vote was made without a debate, prompting fierce protests from the Democrats.

Mr Nikhom, who was chairing the meeting, tried to move on to Section 2 but was prevented by the protests.

Parliament police had to be called in to protect Mr Nikhom. The Democrats then called on Mr Nikhom to adjourn the meeting to today but ruling Pheu Thai MPs wanted to carry on, creating deadlock. Mr Nikhom eventually adjourned the meeting at 9.45pm. It will resume Wednesday.