The US said on Tuesday that Syrian forces were clearly behind the chemical weapons as the likelihood of punitive strikes increased. (Updated with heartwarming video of a father reunited with a son he thought was dead.)

Evening update: Father's unbelievable happiness at being reunited with a son he thought was dead

Last week's attack near Damascus, now widely believed to have been a chemical weapons attack, killed more than a thousand people, many of them children. Since then we have seen many videos and photos of the misery the attack caused, but today we have one small scene of joy. A father, who believed his son was one of the dead, suddenly found out that the young boy was actually alive and well. He was completely overwhelmed until finally, with the help of his neighbours, he was composed enough to hold his son in his arms. Watch – and cry if you want to.

There are longer versions of this video. Just do a YouTube search on "Syrian father reunited with his son" 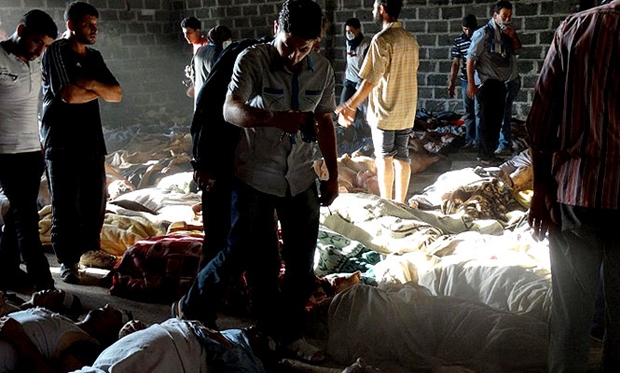 The United States on Tuesday said it was "preposterous" to think anyone but Syrian forces were behind a chemical weapons attack, in an apparent new jab at Russia.

Russian President Vladimir Putin told Britain's David Cameron on Monday that there was no evidence yet that President Bashar al-Assad's forces were to blame for the outrage, British officials said.

The White House is readying a public intelligence assessment on the attack in Syria, which officials say will prove Assad's regime was to blame, as US forces gear up for a punitive military strike.

The alleged attack caused a worldwide outcry, and has prompted increasingly frantic calls from Western and Arab nations for action against the Syrian regime, which denies any involvement.

French President Francois Hollande upped the ante on Syria Tuesday, pledging to "punish" the regime over the suspected chemical attacks and boost military support for the opposition.

"France is ready to punish those who took the vile decision to gas innocent people," he said in a televised speech, pointing the finger of blame at President Bashar al-Assad's regime.

The "chemical massacre in Damascus cannot be left without a response," he added.

A potential coalition of countries that would launch strikes on Syria is likely to include France, as well as Britain, the United States and other countries such as Turkey.

Experts say the most likely form of intervention is targeted strikes against ammunition depots or strategic infrastructure.

But Syria has defiantly vowed to defend itself against any outside intervention with measures it says will "surprise" the world.