Humans destroyed their forest so when no one is looking monkeys enter their homes & steal stuff. 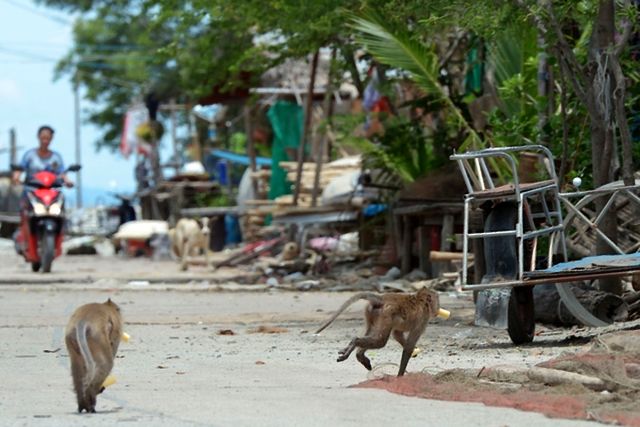 Village under siege from marauding monkeys 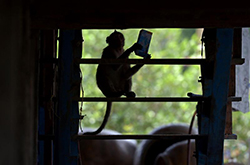 A macaque holds a box of soymilk stolen from a house in Khlong Charoen Wai village. (AFP photo)

CHACHOENGSAO - In one village homes are raided, property is pinched and locals are attacked by dastardly gangs operating beyond the law - but the perpetrators are monkeys, not men.

"They creep into my house when they see me sleeping, they go into the kitchen and take cooking oil, sugar and even the medicines that I hide in a cabinet,'' said Chaluay Khamkajit, after years battling with pesky primates who are thought to have been drawn into Khlong Charoen Wai village by habitat loss.

"They took my snacks, I can buy more, but the medicines are important to me,'' the 72-year-old said, as she and her husband demonstrated a variety of monkey deterrents, including a homemade lock for the fridge and the more direct deterrent of a sling-shot.

Around 150 households in this shrimp farming community in Chachoengsao's Bang Prakong district have suffered raids by these "sea monkeys'' - long-tailed macaques - for about a decade.

The increasing number of shrimp farms, coupled with the associated deforestation and habitat loss, is believed to be behind the surge in the monkeys' depredations.

"They could find food easily in the past but when there is less forest, they have to find food in people's houses,'' said village headman Chatree Kaencharoen, expressing frustration at some villagers who give food to the incorrigible creatures.

"Sometimes, a few hundred monkeys come at once - especially at dawn and dusk when it is cooler. They know it is time to be fed,'' he said.

Conservation group WWF said people have encroached on the monkeys' habitat - not the other way around.

"People have moved closer to nature, that is why there is an increased chance of interaction between human and animals,'' WWF Thailand director Petch Manopawitr told AFP.

"Macaques can adjust their behaviour quite well - they learn in similar ways to humans - and when they know that they can find food in a village, they come.''

The spread of villages into formerly dense forest has caused other clashes between people and beasts in the country.

"Wild pigs eat farm plants, but the villagers can also shoot the pigs and eat them,'' said Mr Petch. Raiding elephants and tigers have posed a less edible source of village disruption. And WWF says the problem is accelerating.

In a recent report, the conservation group said demand for farmland could strip the Greater Mekong subregion - Thailand, Cambodia, Myanmar, Laos and Vietnam - of a third of its remaining forest cover over the next two decades without swift government action.

Between 1973 - the first point of available data - and 2009, Thailand lost some 43% of its natural woodland, the WWF said, although it praised the country for its network of national parks.

Khlong Charoen Wai's monkeys spend their days hanging out on the narrow bamboo bridges that meander across the coastal swampland at the edge of the village.

Mothers lounge with babies slung across their chests, while others leap between nearby mangrove trees.

They tend to flee when approached. But when nobody seems to be looking, they climb onto roofs, leaving trails of muddy footprints as they stalk into homes through any openings they can find.

Residents have been forced to seal their houses with nets, lock their windows despite the tropical heat, and secure their property the best they can.

"They pushed over a 21-inch television, which fell and smashed. They even stole a rice cooker, managed to open it and scooped out the rice to eat,'' said Mr Chatree.

Local authorities tried to curb the monkey raids - even attempting to sterilise the intruders. But that effort was on too small a scale according to deputy village head Tawin Songcharoen.