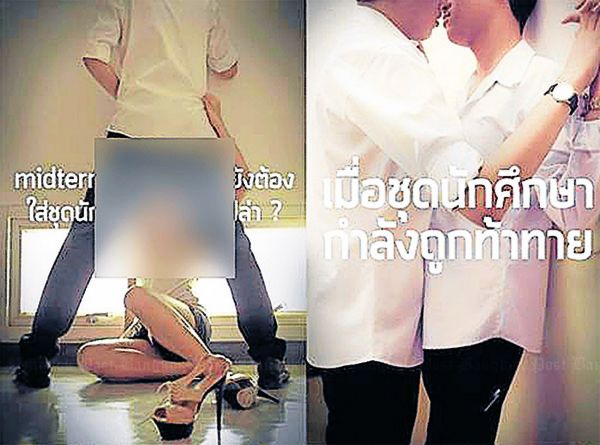 Two of the controversial posters. The left one reads, 'Did you wear your uniform to the last exam?', and the right, 'When the university uniform is being challenged'.

The posters appeared suddenly at Thammasat University's Rangsit Campus, and they were designed to shock. They showed students in uniform simulating sexual acts, in provocative positions, with legs spread and buttons undone, though without any nudity. The four guerilla posters, put up surreptitiously last week, did their job - igniting a storm of controversy and opening up debates not only about student uniforms but also the big themes of freedom, choice, and the value of one of Thailand's educational institutions.

On Sunday, a second-year liberal arts student who calls herself Aum Neko admitted responsibility for the posters. She was protesting against a lecturer who required his students to wear uniforms to class.

The caption on one poster reads: "Did you wear your uniform to the last mid-term exam?" And another: "Free your humanity from the shackles."

Thammasat University rector Somkid Lertpaitoon said he would set up a committee to review Aum Neko's actions, since this was not the first time the 19-year-old student had engaged in "inappropriate" behaviour. (Last year, she posed for a sensational photograph with the statue of Pridi Banomyong, the revered founder of Thammasat.) Meanwhile, social media and mainstream news outlets have been abuzz with debate about the necessity of university student uniforms and the implications for democracy, social values, and even about liberal-versus-conservative politics that resonate beyond the campus.

"People have to distinguish what I'm trying to campaign for," said Aum Neko. "I want the practice of 'forcing' students to wear uniforms to be over, but not to put an end to the use of uniforms. Thammasat has set clear rules that there is to be no forcing in terms of the students' uniform wearing; they can choose to wear the uniform or whatever they want to go to study.

In class TU130 though, students are told they must wear the uniform otherwise they will not be given the quiz sheet. The students are deprived of this basic right. Will the democratic roots of Thammasat University be left?

"Personally, I believe in liberalism. I believe that 'forcing' students to wear uniforms at university level is an insult to their intellect and humanity. You are using the power of uniforms to control, not only their bodies, but their behaviour and thoughts." About the provocative posters, in which she poses as one of the models, Aum Neko said that the main concept is to tie the uniform, which traditionally represents goodness and morality, together with sex, which represents wickedness, something that shouldn't be expressed.

"With the 'intercourse' of these two concepts," she added, "it's unacceptable in society that the power of uniform is being challenged by the power of sex. These things in the poster were produced to say that goodness and morality is not the only definition of the student uniform."

As of yesterday morning, the lecturer of the TU130 class was still insisting his students wear uniforms to class to get attendance and that it was a means to improve discipline.

Thammasat University vice-rector for student affairs Prinya Thaewanarumitkul said there were actually two significant issues that needed to be taken into account: what Aum Neko was protesting against and the approach she took.

''Thammasat University has always been open to freedom of expression, creativity and thoughts. And the university does not have a certain regulation to force students to wear uniforms. For disciplinary causes, we only ask them to dress appropriately to class or they can choose to wear uniforms. Some faculties have enforced uniform-related regulations far beyond what the university mentioned which have, just like this case, caused some disagreements.''

Of the radical posters themselves, Prinya is of the opinion that displaying sexually provocative content in public is unacceptable not only in Thailand but around the world. So the anti-uniform posters have apparently gone beyond the limits of freedom of expression and the controversy has become an important lesson for students about the meaning of democracy.

''When we talk about rights and freedom, it is vital to bear in mind that rights and freedom always come with limits,'' said Prinya, also a law lecturer. ''Sometimes we underline the concept of rights and freedoms but fail to stress that boundaries must also be maintained while exercising them. Rights and freedoms must be based on the fact that they do not put other people in trouble, do not go against morality nor violate the rights of others.''

Thammasat University is setting up a committee comprising university staff and lecturers and student representatives to investigate the issue and come up with solutions. But speaking personally, Prinya does not believe wearing uniforms inherently promotes discipline among students.

''If uniforms were able to make people have more discipline or responsibility, Thailand would be full of highly disciplined and responsible citizens because our children are required to wear student uniforms from kindergarten up until they finish high school. That is 15 full years.'' The issue has quickly found supporters on both sides - anti-uniform and anti-posters - perhaps more than last year's debate and the eventual removal of the rule requiring secondary school students to have crew cuts.

A group of students calling themselves the ''League of Liberal Thammasat for Democracy'' has thrown cautious support behind Aum Neko, although it had nothing to do with the posters.

''Even though this method might create a lot of opposition, at the same time it has also created a wide discussion,'' a representative of the group said. ''For us, we think there might be a better idea than this, like putting up mocking posters or organising fun activities, something that's more creative than this kind of poster that draws a lot of criticism.

''But we think there shouldn't be any forcing of university students to wear uniforms any more, especially in Thammasat which is known to have 'freedom in every square inch'.''

Testing convention and the reaction of her peers and society, Aum Neko knows the battle is far from over.

''I realised that there would be people who like and people who don't. But I can't force people to think the way I do,'' she said.

''I was worried that Thai society wouldn't try to understand.

''I hope that society will get to learn a lot of things from my bringing this issue up. True freedom starts from learning to accept diversity of thoughts and using intellect in discussion.''

It's a bit disheartening to see that we've become a society that can't even discuss these things in a civilised manner unless someone does something provocative so he/she will get attention. Nevertheless, I think it's great that the posters have managed to muster up so much response. It's awesome that she does not only say it, but carries out what she believes. Students should dare to challenge and question things more and there should be this kind of student in all classrooms.

She's only half right with what she's saying though. I'm not even referring to the sex part here, but Americans and Westerners are not a collectivist society like we are. For them, it's always been OK to not wear uniforms. We have to admit that we are different from that but sure, I'll take what she says into account.

At Assumption University, it's very strict, where we have to wear leather shoes, ties, slacks and have tucked in shirts. I've gotten so tired of getting told off by the guards. But it doesn't mean anything because if you are good at studying, wearing the uniform or not is not going to hide that fact. Ultimately, just don't mind the uniform.

To be honest, I was a bit shocked at first when I saw the posters. It's vile and I'm sure there really should have been better ways to bring this point up.

From what I understand, I think the message is that doing bad things while wearing the uniform makes our institution look bad, so we shouldn't wear it altogether. Ironically, it's her very action of doing this that makes the university look bad, it doesn't even have to do with the uniform.

The uniform is only meant for wearing when you go to study anyway, and it's not like you'd do terrible things when you're wearing it. If you want to do whatever it is without the burden of shedding a bad light on your university, just change into another outfit. I've never felt that it's a burden that I am carrying my institution's image on my sleeve, it's but a tiny price to pay for being part of a prestigious establishment.

I guess we all complain about it [the uniform] but it's something you eventually get used to wearing. I feel that the requirement of having to wear the uniform during exams is not unreasonable and it's a good rule to enforce to make sure it's truly a student from there and not a random, fake person that is taking the test instead.

Two of the controversial posters. The left one reads, ‘Did you wear your uniform to the last exam?’, and the right, ‘When the university uniform is being challenged’. 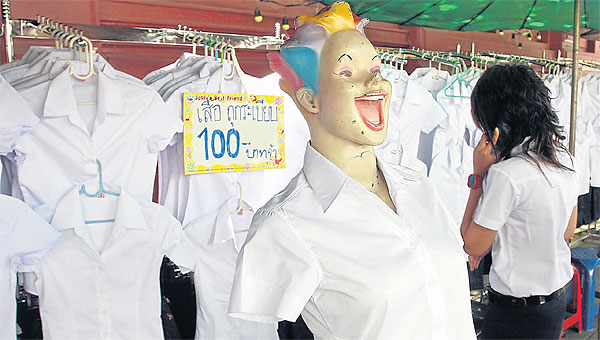 To wear or not to wear, that is the question that plagues some university students.