Pope Francis has accepted an invitation to visit Thailand, the government said yesterday. The invitation was extended to the Pope by PM Yingluck Shinawatra during her visit to the Vatican yesterday. 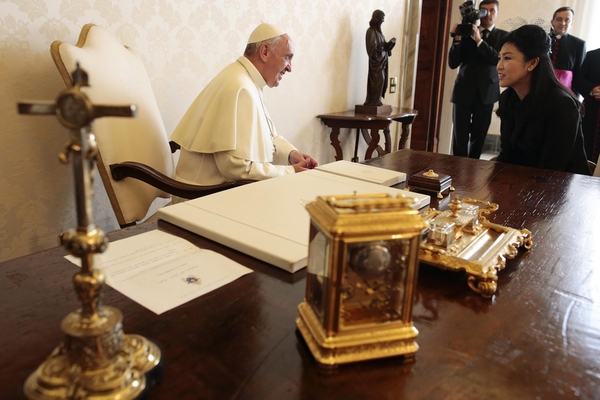 Pope Francis has accepted an invitation to visit Thailand, the government said yesterday.

The invitation was extended to the Pope by Prime Minister Yingluck Shinawatra during her visit to the Vatican yesterday. It is unclear when the papal visit will take place.

In a meeting at the Apostolic Palace with Pope Francis – the first visit to the Vatican by a Thai prime minister since Field Marshall Plaek Pibulsonggram in 1955 – Ms Yingluck said bilateral ties with the Holy See date back to when Ayutthaya was the Thai capital more than 390 years ago.

She said her visit was also a show of respect for Catholicism, which has "influenced the world and humanity". Ms Yingluck said the Catholic faith had promoted human rights and helped solve many problems on a global level as well as in Thailand. 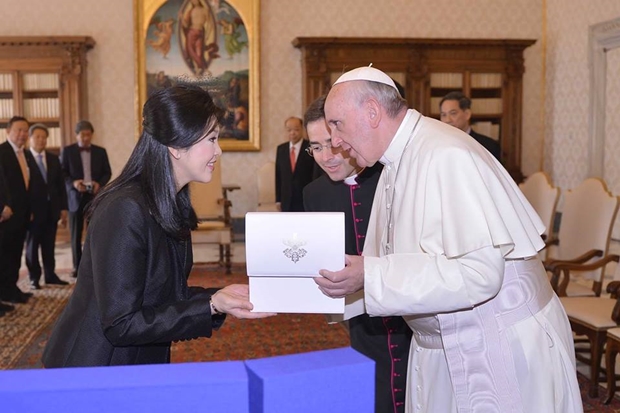 Pope Francis and Thai Prime Minster Yingluck Shinawatra discuss a gift during a private audience at the Vatican on Thursday. Photo from PM's Facebook page.

Ms Yingluck said Catholics in Thailand have held important roles in driving the country's economy and have contributed to society's progress. Thailand is home to about 370,000 Catholics.

Turning to global issues, the Pope and Ms Yingluck discussed poverty and their mutual aspirations for better standards of living.

The Vatican and the prime minister agreed they will support efforts to increase access to public health and maintain peace through inter-faith dialogue.

Earlier, Ms Yingluck met with her Italian counterpart, Enrico Letta, in Rome where they discussed the development of Asean and free trade and economic cooperation in the region.

The prime minister also witnessed the signing of several memoranda of understanding to forge bilateral ties on the development of small and medium enterprises, military affairs, and between the Board of Investment of Thailand and the Italian Trade Commission.