The government is considering the use of special emergency laws to control increasingly violent rubber farmer protesters in the South. About 70 police officers were injured in clashes yesterday and about 10 police vehicles were set on fire. 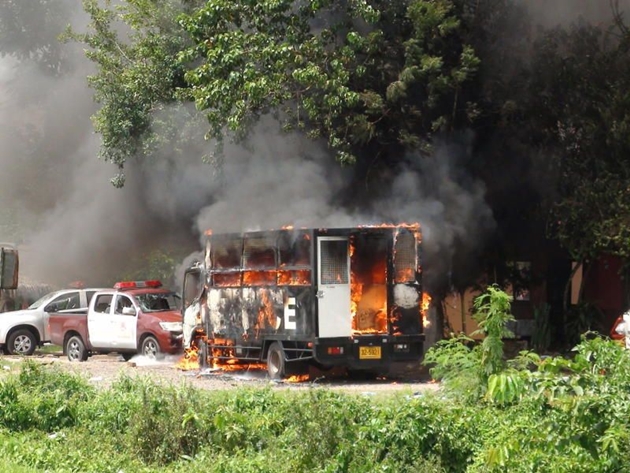 A police truck was among vehicles set ablaze during a clash between rubber farmers and police using tear gas at the Khuan Nong Hong intersection in Nakhon Si Thammarat's Cha-uat district. NUCHAREE RAKRUN

The government is considering the use of special emergency laws to control rubber farmer protesters in the South, Thawat Boonfueng, deputy secretary-general to the prime minister, has said.

About 70 police officers were injured in the clashes and about 10 police vehicles were set alight in the scuffle.

There were several injuries on both sides, including two protesters – a man and a woman – who were shot in their legs. It was not clear who fired the shots. Both were taken to Maharaj Nakhon Si Thammarat Hospital.

Pol Maj Gen Thawat said the situation has become worse to the point where it is now beyond the scope of the public disaster prevention law under which police have so far handled the protests. Reports from the scene early Tuesday said police had ordered a curfew, to try to quell the violence. 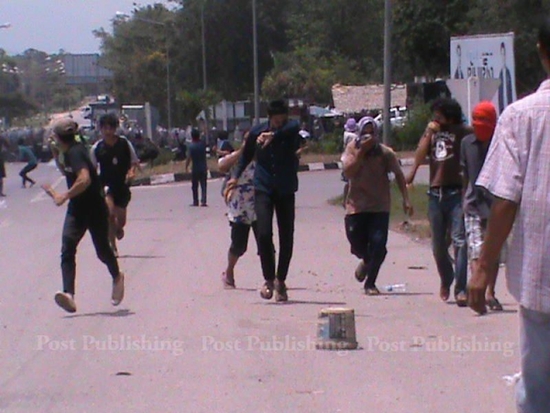 Young protestors retreat from police. Shortly afterward they came back in large numbers and forced the police to leave. NUCHAREE RAKRUN

The protesters are growing in number, he said. Most are teenagers, and the authorities do not know who they are being led by. Pol Maj Gen Thawat said the protesters were abusing drugs and were drunk.

Police withdrew from the intersection around 2-3pm Monday.

National police chief Adul Saengsingkaew will decide whether a special law should be used to control the protesters, Pol Maj Gen Thawat said.

The laws being considered include the Internal Security Act and the Emergency Decree.

Over 1,000 protesters continued to gather at Khuan Nong Hong intersection last night to block Highway No.41. They blocked the intersection with burnt police vehicles.

He said the situation was out of control and the area was sliding into anarchy.

Most rubber farmer representatives earlier accepted the government's offer of a 90-baht price guarantee and a 2,520-baht-per-rai cultivation subsidy.

About 300 police officers, mostly from riot control units, managed to clear the protesters and their blockades – which included branches, concrete pipes, tents, tables and chairs – from Khuan Nong Hong intersection about 7am Monday. There were only 20-30 protesters manning the blockade at the time, and all fled at first sight of the approaching riot police.

The road was reopened to traffic shortly afterward.

At noon, however, about 1,500 protesters, mostly local teenagers, returned to the intersection and attacked officers with catapults and rocks, police said.

Police returned fire with tear gas canisters, but were apparently overwhelmed and retreated from their position at the intersection. The protesters then resumed their road blockage.

It was reported that protesters, mostly the young ones, were from other southern provinces and mobilised to reinforce the blockade.

He said the rubber policy committee had studied the issue thoroughly and the government's offer was the best it could manage.

The government will no longer enter into negotiations with the protesting farmers, Mr Kittiratt said.