Update: Khlong Rangsit overflows. All of a sudden this year's flood season seems much more serious as waters rise near the industrial estates devastated by the 2011 floods. Severe flooding has also occurred in provinces near Cambodia. 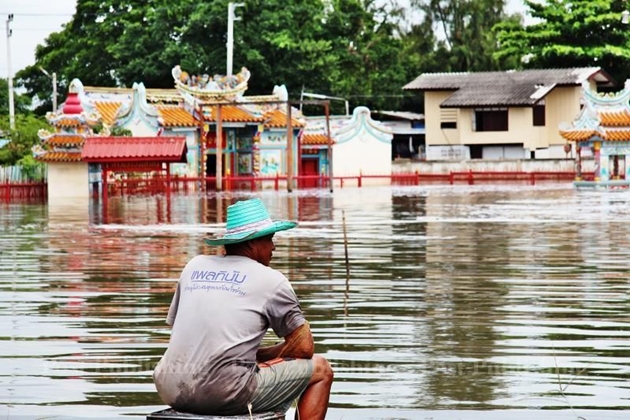 The combination of continuous downpours and run-off being released into the Rangsit Prayurasakdi canal from neighbouring districts led to floods that submerged tambon Ban Mai, Lak Hok, and Bang Poon. PONGPAT WONGYALA

The combination of continuous downpours and runoff being released into the canal from neighbouring districts led to floods that submerged tambon Ban Mai, Lak Hok, and Bang Poon.

Lak Hok village chief Piyasak Sittitham on Tuesday said that a deluge of water from the Chulalongkorn and Prem Nua water gates and 15 water pumps had been dumped into the canal. 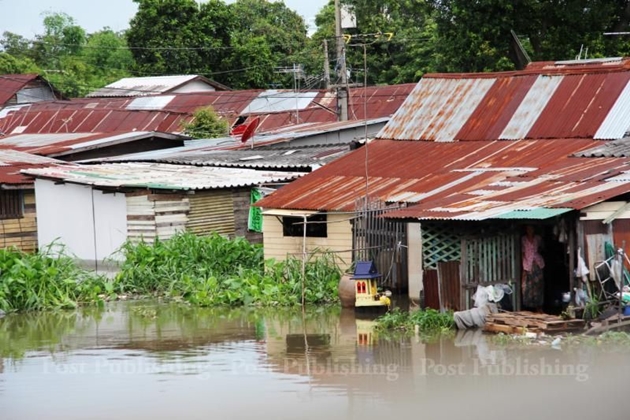 He added that the Pak Khlong Rangsit water gate that releases water from the Rangist Canal into the Chao Phraya River only has four water pumps currently running, which is not enough to keep the canal’s water level down during periods of heavy rainfall.

The Pak Khlong Rangsit water gate has 20 water pumps, but only eight of them work because the Regional Irrigation Office 11 at Pak Khlong Rangsit does not have sufficient budget to purchase parts to support the running of the remaining machines. 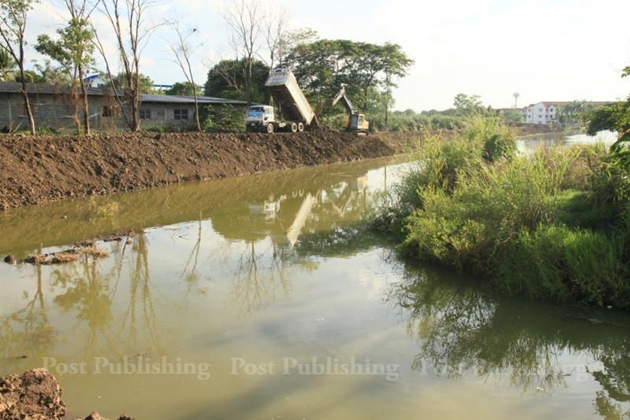 A flood wall under construction at Saha Rattana Nakorn industrial estate in September 2012. A year later and the estates flood defences are still only 30 percent completed. SUNTHORN PONGPAO

State authorities are gearing up to protect industrial estates in Ayutthaya and Pathum Thani provinces as flood water begins inundating many low-lying areas in the Central Plains.

Days of widespread and heavy rain in the upper part of the central, lower northeastern and eastern regions have also resulted in flash floods in many provinces, affecting farmland and businesses in urban areas.

Flood water from the North has reached Ayutthaya province through the Chao Phraya and Pasak rivers and flowed into the Hantra and Kamang canals.

Sluice gates intended to protect urban areas in the heart of the province, as well as its Uthai district and the Rojana Industrial Park, have not yet been completed.

The canals are overflowing in tambon Hantra and tambon Phai Ling sub-districts.

Water from both canals is also flowing into the Khao Mao canal which leads to the Rojana Industrial Park and the Muang Mai community.

The Royal Irrigation Department closed the sluice gate at the mouth of the Khao Mao canal.

If the water gets through the gate, it would reach the commercial areas of Ayutthaya very quickly.

Industry Minister Prasert Boonchaisuk said he was worried about the situation at Saha Rattana Nakorn Industrial Estate as it was the only one of six industrial estates in Ayutthaya and Pathum Thani where floodwalls have not been completed.

The flood protection system at Saha Rattana Nakorn is only 30% complete. 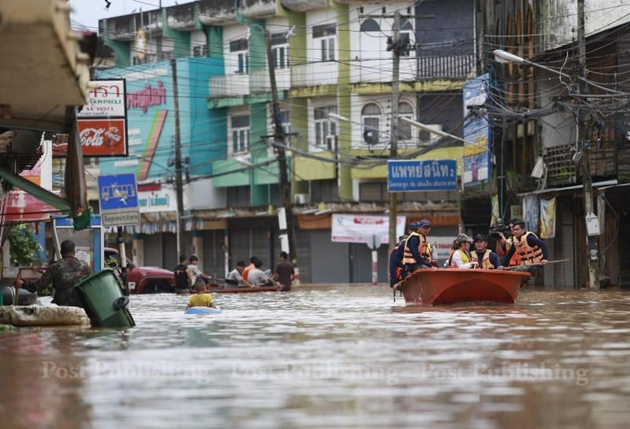 The situation in Kabin Buri of Prachinburi province is worse than last year, worse than 2011. THANARAK KHOONTON

Despite flooding elsewhere in Prachin Buri, the newly built Hi-Tech Kabin Industrial Estate in the eastern province remains intact because its compound is elevated.

Suthep Noipairoj, deputy director-general of the Royal Irrigation Department, said water from Nakhon Sawan province has now reached Bangkok and the level of the Chao Phraya River in the capital and nearby provinces is rising rapidly.

Koh Kret island in Nonthaburi province, north of Bangkok, is now partially flooded as a result. Koh Kret is located on the river.

Mr Suthep said areas protected with embankments along the river, including those in Bangkok, would not be flooded

The Department of Disaster Prevention and Mitigation said flooding has hit a total of 21 provinces, comprising seven in the Northeast, four in the North, seven in the Central Plains, two in the East and one in the South.

Northeast-bound trains to Ubon Ratchathani can go no further than Sikhoraphum station in Surin, as the tracks between Surin and Si Sa Ket are 1.5m under water over a distance of about 3km.

The Meteorological Department predicts more rain in the lower North, the upper part of the Central Plains and the Northeast from tomorrow until Saturday.

Meanwhile, the Royal Irrigation Department said it will increase the discharge rate of the Chao Phraya dam in Chai Nat province to relieve the water run-off from the North. The rate will rise from 2,000 to 2,300 cubic metres per second.