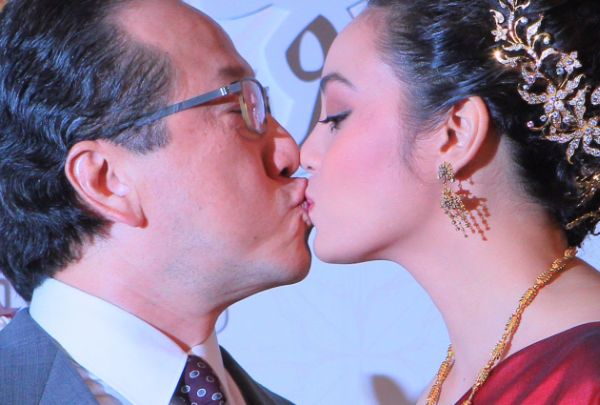 In a much publicized marriage, celebrity Tak Bongkot married billionaire business Khun Boonchai. Not having enough money to give a child a good life is one common reason for not having children.

City singles in no hurry to tie the knot

Twice a month, Varaporn meets her 29-year-old niece at a coffee shop in Bangkok to share their life stories.

Having a doctorate degree in education, Varaporn, who has just turned 54, has never felt ashamed about her unmarried status, even though she was brought up in a generation that put pressure on women to get hitched.

"I have a house, a car and a high academic status. What else do I need?" she said. "My life is complete."

Her niece, May, adopts a similar attitude. She has a partner but no ambition to have children.

"Having a kid is just too expensive," May said. "If I can't offer my kids the best care, I'd rather not have any."

The two urban women reflect a new stream of thinking in modern Thailand which has resulted in a considerably low birth rate compared to previous generations.

Recently, many were flabbergasted to hear reports of a suggestion made by Rangsit University economist Terdsak Chomtohsuwan that the government should provide subsidies to parents having their first child while introducing a tax on single people.

The academic reasoned that Thailand risks future labour shortages due to the low birth rate.

Although his idea was slammed by many, particularly in social media outlets, the fact is that Thailand is facing the risk of a population-age imbalance.

The total fertility rate (TFR), a direct measure of the level of fertility referring to births per woman, is now the lowest in Thai history, according to Pramote Prasartkul, of Mahidol University's Institution for Population and Social Research (IPSR).

The study found the birth rate has been declining rapidly since 1980.

The TFR dropped from more than six births per woman before 1970 to 1.6 at present.

In the Southeast Asian region, only Singapore has a lower TFR rate than Thailand at 1.2. Vietnam is at 1.8, Malaysia is at 2.6, and Cambodia, Laos and Myanmar are more than three.

A 2013 survey from the National Statistic Office found 21% of Thai females aged over 15 remain single.

There were more than 1 million birth registrations each year over the past 45 years. But less than 800,000 babies were registered last year.

Urban women tend to prefer single status to those in rural areas. About 30% of Bangkok woman are single. More married couples are tending to decline to have kids as well, the survey found.

"Still, I think the quantity of births is not as important as the quality of births," Mr Pramote said. "We must also plan for good welfare, health care and financial security for the elderly."

The 11th National Economic and Social Development Plan (2012-2016), approved by the cabinet last year, expresses concern about the change in demographic structure.

The plan focuses on improving the workforce's skills and expertise to meet emerging challenges as well as technology development.

Health Department director-general Pornthep Siriwanarangsan said the Public Health Ministry had a policy to encourage more births. While the policy is still being discussed, the concept is to encourage well-planned child deliveries along with suppression of teen pregnancies, he said.

"Having kids won't be a difficult matter. They [mothers] won't have to leave their jobs or pay high expenses to raise a child."

Thailand was classified as an ageing society in 2005 when the number of people aged over 60 reached 10% of the population.

Worawan Chandoevwit, a researcher at the Thailand Development Research Institute, said the government must prepare measures to deal with its ageing society."It needs to create the system that can encourage more people to save," he said.

School term may be postponed

No curfew, gatherings banned for 2 weeks