Chinese tourists should not pick their noses in public, pee in pools or steal airplane life jackets, China's image-conscious authorities have warned in a handbook. 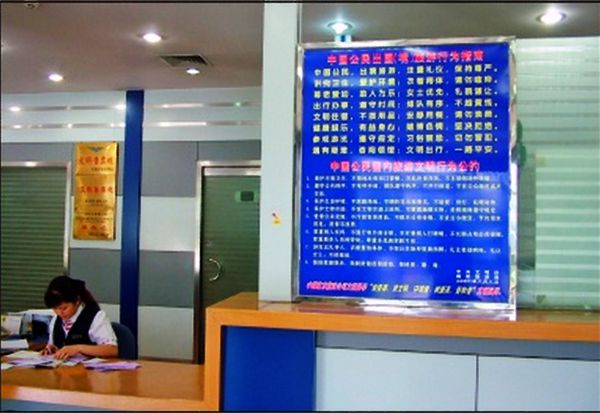 A sign displays the official guidelines for tourist behavior in a ticketing office for China Southern Airlines in Guilin, China in the year 2008. The rules for outbound tourists are listed above the rules for domestic tourists. China's government has now published a Guidebook for Civilised Tourism with pictures to explain a long list of dos and don'ts. (Source: China’s Campaign for Civilized Tourism, Anthropology News, 2010)

BEIJING - Chinese tourists should not pick their noses in public, pee in pools or steal airplane life jackets, China's image-conscious authorities have warned in a handbook in their latest effort to counter unruly behaviour.

The National Tourism Administration publicised its 64-page Guidebook for Civilised Tourism -- with illustrations to accompany its list of dos and don'ts -- on its website ahead of a "Golden Week" public holiday that started on October 1.

As Chinese tourists increasingly travel abroad, they have developed a stereotype of "uncivilised behaviour", which Vice Premier Wang Yang said in May had "damaged the image of the Chinese people".

A mainland Chinese woman who in February had her son relieve himself in a bottle in a crowded Hong Kong restaurant sparked an outpouring of anger online, with some locals deriding mainlanders as "locusts".

The government has previously issued pithy guidelines telling tourists how to behave, but the latest booklet elaborated in great detail.

It also urged them not to occupy public toilets for long periods of time or leave footprints on the toilet seat. Nor should they pee in swimming pools.

Travellers should not drink soup straight from the bowl or make slurping sounds when eating noodles, it warned.

And after taking a flight they must leave the life jackets underneath their seats, the rulebook said, explaining that "if a dangerous situation arises then someone else will not have a life jacket".

A tour guide surnamed Zhang who was in Hong Kong on Tuesday said his company had given him a copy of the rules at the start of the seven-day October holiday.

Before this he said they had distributed a much briefer set of guidelines -- which fit on a single sheet of paper.

"I feel things need to be improved," he said, standing in the city square packed with mainland tourists. "If we bring chaos to other places, it's our image -- the Chinese image -- that suffers."

The handbook also dispensed country-specific advice: Chinese visitors to Germany should only snap their fingers to beckon dogs, not humans.

Women in Spain should always wear earrings in public -- or else be considered effectively naked.

And diners in Japan were instructed not to play with their clothes or hair during a meal.

A 33-year-old tourist, also surnamed Zhang, visiting Hong Kong from central Anhui province complained that the guidelines were too many and too specific.

"You cannot possibly look through all of the rules before you go travelling. Also the rules are different in different places," he said. "I think it's not very feasible."