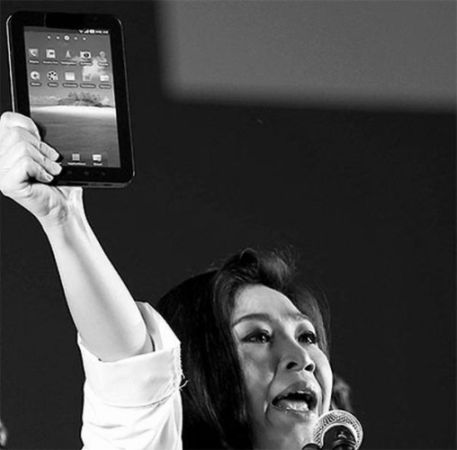 Photo taken at the launch of the government One Tablet Per Child program.

About 30% of 860,000 tablet computers distributed to Prathom 1 students last year are reported to have broken, a source on the tablet committee said.

He said the information was discovered by the Office of the Auditor-General (OAG), which monitored the government's One Tablet PC Per Child policy in its first year of implementation last year.

The OAG also discovered problems in maintaining the Chinese-made tablets for students.

The supplier, China's Shenzhen Scope Scientific Development, had signed an agreement with a local firm, Advice Distribution, to maintain and repair the tablets for two years.

The OAG report revealed that restoration of damaged tablets took a long time and some branches of Advice Distribution were shut down afterwards.

This problem must be investigated to establish whether it went against the procurement contract or not, the source said.

The source, who is an OAG official, refused to give more details about the report, but said it would be forwarded to the tablet committee soon to be taken into account for future tablet schemes.

The source said China's Shenzhen Yitoa Intelligent Control, which won the bidding to procure 431,105 tablet computers for all Prathom 1 students in Zone 1, and 373,637 tablet computers in Zone 2, recently requested a month-long postponement of delivery of the devices.

The company claimed its factory was damaged by a fire.

The source said the company's request was turned down. The company is required to deliver the first lot of the tablets next month, or be fined.

Meanwhile, the Comptroller General's Department (CGD) is expected to issue a ruling this week on whether to revoke a bidding contest for 426,683 tablets for Mathayom 1 students and teachers in Education Zone 3 covering the central and southern provinces.

The contest has been suspended over suspicions of bid rigging.