Skulls found in Georgia suggest that early human-like individuals may have looked very different from each other, but were likely members of the same species. 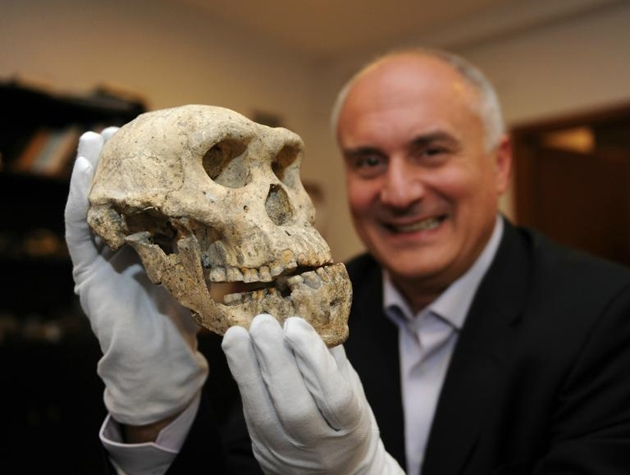 David Lordkipanidze, the director fo the Georgian National Museum, holds the skull from 1.8 million years ago during a press conference in Tbilisis, on October 18, 2013. AFP

Tbilisi, AFP — Georgian scientists on Friday presented a 1.8 million-year-old skull discovered in the Caucasus nation that researchers say could force a re-evaluation of current theories of human evolution.

The skull – unearthed in the medieval town of Dmanisi some 100 kilometres southwest of the capital Tbilisi – is the first completely preserved skull found from that period.

Along with four other skull samples uncovered at the site, it appears to show that early man was a single species with a wide range of looks rather than several distinct species.

"Today in this skull – and the other Dmanisi samples – we see all the features lumped together in one group that we previously thought identified different groups," David Lordkipanidze, Georgia's national museum director, told AFP after a presentation in Tbilisi on Friday.

The collection – which is housed in the vault of Georgia's national museum – is "the richest collection of hominids in the world from that time", according to Lordkipanidze, the lead researcher on the project.

The stunningly well-preserved find – known as Skull 5 – has an almost-complete set of teeth and seems more elongated than a normal human skull.

The fossil – which is about a third the size of a modern human head – is normally kept in a special padded box in the vault.

Wearing white gloves to avoid contaminating the sample, a beaming Lordkipanidze held up both the jaw and main section of the skull as photographers took pictures.

A replica of the skull was unveiled for display to visitors in the museum.

The conclusions – published in the US journal Science on Thursday – are the result of some eight years of research carried out by Georgian and international scientists since the discovery of the skull in 2005. 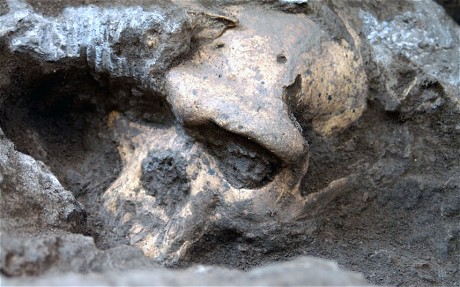 The skull before it was extracted from its original resting place. AFP


The skull was found lying a few metres from where its jawbone had been discovered earlier in 2000.

The skulls vary so much in appearance that under other circumstances, they might have been considered different species, said co-author Christoph Zollikofer of the University of Zurich.

"Yet we know that these individuals came from the same location and the same geological time, so they could, in principle, represent a single population of a single species," he said.

"The five Dmanisi individuals are conspicuously different from each other, but not more different than any five modern human individuals, or five chimpanzee individuals, from a given population," said Zollikofer.

They also suggest that early members of the modern man's genus Homo, first found in Africa, soon expanded into Asia despite their small brain size.

But not all experts agree.

"I think that the conclusions that they draw are misguided," said Bernard Wood, director of the hominid paleobiology doctoral program at George Washington University.

"What they have is a creature that we have not seen evidence of before," he said, noting its small head but human-sized body.

"It could be something new and I don't understand why they are reluctant to think it might be."

The site of the discovery – thought to have been close to an important water source – also contained rudimentary stone tools hinting at early butchery techniques and the bones of large, sabre-toothed cats.