Passionate about history, Pornnatcha prepared from an early age for this exciting career that combines diving under the sea with archaeology. 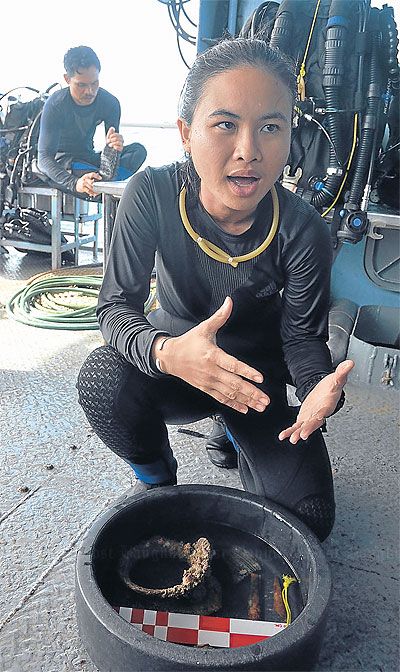 Diving into the past

Wearing a diving suit, fins, a scuba tank and other diving equipment, 26-year-old Pornnatcha Sankhaprasit is ready to dive down 22m into the sea to survey the Rang Khwian shipwreck site 10km off the shore of Satthahip district, Chon Buri.

About half-an-hour later, she and her colleagues emerge from the water with a piece of ivory, a fragment of pottery and two Chinese coins dating back to the Ayutthaya period. Pornnatcha is an underwater archaeologist. She has had a passion for Thai history since childhood and worked as a volunteer assistant to underwater archaeologists since she was 19 after attending a summer camp at the Fine Arts Department's Office of Underwater Archaeology in Chanthaburi. She earned a bachelor's degree in archaeology from Silpakorn University.  After graduation, she became an archaeologist at the 11th Fine Arts Office in Ubon Ratchathani and worked in Kalasin, Roi Et and Khon Kaen for four years.

In addition to scuba diving, to become an underwater archaeologist  Pornnatacha had be trained in how to use special machinery such as sonar devices for locating shipwrecks, underwater cameras for recording the locations of finds, and sand vacuum machines for finding objects on the sea floor.

Each diving trip can last from a week up to a month. Every dive takes about 30 minutes. They usually make one dive a day and reach an average depth of 30 meters, however, highly experienced divers can go as deep as 60m. Pornnatcha once went down as far as 36m.

"Just finding an undamaged pot is exciting for me. Water pressure and poor vision can impair our ability and judgement, plus we are thinking about so many things simultaneously. This could include having to focus on the task at hand or the air left in our cylinders," she says.

This occupation is known as a risky one. Every month the divers receive a risk allowance in addition to their salary and about three years ago, an underwater archaeologist died on duty after emerging from the water too fast and failing to adjust to the rapid change in pressure.

Underwater archaeology officially began in Thailand in 1974 with an excavation in Satthahip Bay, Chon Buri, carried out by the Fine Arts Department and supported by the Royal Thai Navy. Technical assistance and training was provided by the Danish government in 1975 and staff was increased from four naval officers to a team of 15 marine archaeologists, Fine Arts Department officials and navy officers.