At least 16 Saudi women have received fines for taking the wheel on a day set by activists to defy the kingdom's traditional ban on female driving. 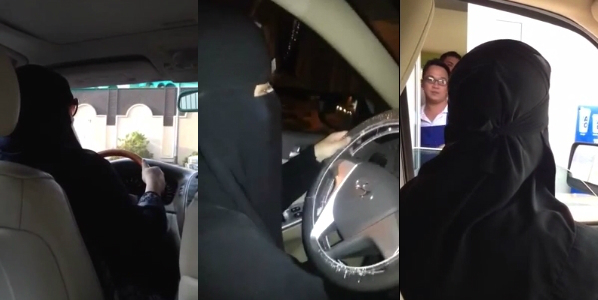 Still pictures from videos posted by three Saudi women drivers to YouTube and announced on the protest twitter account @oct26driving. The woman on the right even drove through a toll booth in clear sight of the male workers there.

Riyadh (AFP) — At least 16 Saudi women have received fines for taking the wheel on a day set by activists to defy the kingdom's traditional ban on female driving, police and reports said Sunday.

Only a few women braved official threats of punishment and drove on Saturday in response to an online campaign headlined "Women's driving is a choice."

Each of the women, along with her male guardian – who could be a father, husband, brother, uncle, or grandson – had to "sign a pledge to respect the kingdom's laws," Miman told AFP.

Saudi newspapers, meanwhile, reported that six women were stopped by police in Eastern Province, and at least two others were stopped in other parts of the kingdom.

A dozen Saudi women posted videos on the Twitter account of the campaign, @oct26driving, showing themselves driving.

Activists had originally issued a call on social media networks for women across the kingdom to drive their cars on Saturday to challenge the ban.

Some say they received telephone calls from the interior ministry asking them to promise they would not drive on Saturday.

On Wednesday, the ministry said it would act against anyone who attempts to "disturb public peace" by congregating or marching "under the pretext of an alleged day of female driving."

The next day ministry spokesman General Mansur al-Turki told AFP: "It is known that women in Saudi are banned from driving and laws will be applied against violators and those who demonstrate in support" of this cause.

Activists say Saturday was chosen as a "symbolic" date as part of efforts first launched more than a decade ago to press for the right to drive.

The absolute monarchy is the only country in the world where women are barred from driving. Public gatherings are officially banned.

A video of a Saudi woman driving around her neighbourhood and explaining why she drives: