With the cool season coming, Isan villagers prepare to dig up worms for export to China, earning 20-30,000 baht per household. 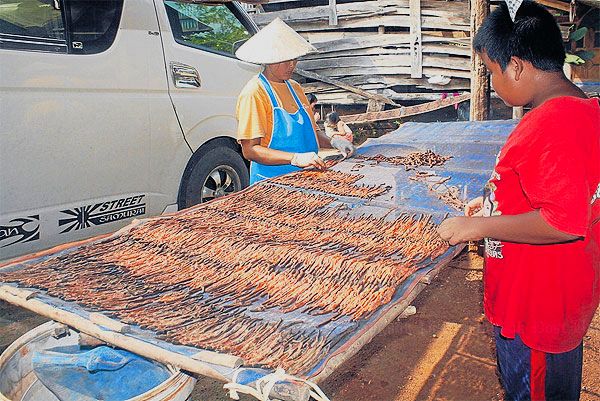 Baan Tal villagers dry worms after gutting and cleaning them. They will be exported mainly to China and Taiwan. PATTANAPONG SRIPIENCHAI

The inhabitants of Baan Tal in Na Wa district of Nakhon Phanom earn their living from rice and crop farming, much the same as other villagers in Thailand. But some have taken up an odd job to earn extra income - digging up earthworms for export.

Winter is the perfect season for the villagers to get up early and unearth earthworms because of the cool weather, said Nongnuch Saengphaidaeng, a local.

"Earthworms will migrate from dry, hot places to cold, moist areas. The morning is the easiest time to catch them," said Ms Nongnuch, 36.

The earthworms will be cleaned, processed and dried for sale to traders, who export the worms, mainly to China and Taiwan as the main ingredient for their energy drinks.

Many Chinese believe drinks with components of earthworms, geckoes or leeches will give them powerful strength.

Ms Nongnuch said the value of live earthworms is 20 baht a kilogramme, while it is 200 baht per kg for the dried product.

Vira Rerkvanichkul, the chief of Na Wa, estimates sales of earthworms in the district exceed 10 million baht a year, with each household earning income of 20,000 to 30,000 baht every season.

Digging up worms or other exotic creatures like geckoes is common for people in the Northeast, as such work has been going on for over two decades.

Mr Vira plans to talk with government agencies about the possibilities of running an earthworm business year-round instead of seasonally. He wants the activity to be ecologically sound and it must not disturb local residents due to the smell of the production process.

Earthworms have various uses. The Thaiwormclub reports the US and Europe use them as fishing bait, while some Asian consumers process the worms for pick-me-up drinks.

The US is the biggest earthworm producer, followed by India and Thailand.

Popular earthworm species for breeding and selling in the international market include tiger worms (Eisenia foetida), one of the most expensive species, selling for about 3,000 baht per kg in the US and 5,000 baht in Thailand, and African nightcrawlers (Eudrilus eugeniae), ranging from 600 to 1,500 baht per kg.

The most prevalent species here are pheretima peguana, blue worms, and pheretima posthuma, which have export prices ranging from 150 to 1,000 baht per kg.