After 19 hours of often acrimonious debate, the House of Representatives passed the third and final reading of the Phue Thai party's controversial amnesty bill. Meanwhile, groups opposing the amnesty increase the pressure. 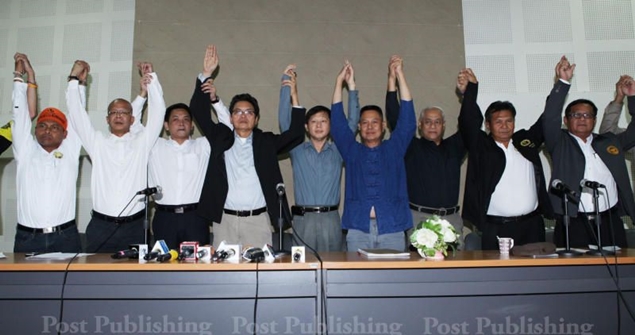 The anti-Thaksin coalition represented by Suriyasai Katasila and Somkiat Pongpaibul (third and fourth from left) announced yesterday it would mobilise protesters countrywide to come to Bangkok to join the protests. APICHIT JINKUL

The anti-Thaksin coalition has thrown its support to the anti-government rally at Uruphong (left). Meanwhile, the Democrats held a second day of rallies near Samsen railway station. PAWAT LAOPAISARNTAKSIN / PATIPAT JANTHONG

Allied anti-Thaksin Shinawatra groups nationwide announced they will mobilise supporters to gather in the capital to protest against the government's amnesty bill, which passed its final House reading early yesterday.

However, the main opposition Democrat Party elected not to expand its own anti-amnesty rally being held in the Samsen area.

The anti-Thaksin coalition represented by Suriyasai Katasila and Somkiat Pongpaibul, the State Enterprises Workers' Relations Confederation and the Dhamma Army announced yesterday it would mobilise protesters countrywide to come to Bangkok to join the protests.

The called on protesters to join either the rally of the Network of Students and People for Reform of Thailand (NSPRT) at Uruphong intersection or the People's Force for Democracy to Overthrow Thaksinism (Pefot) at Lumpini Park.

"Amnesty opponents countrywide should join the anti-government rallies [in Bangkok]," Mr Somkiat said in a statement. "Some should go to Uruphong intersection to help the NSPRT defend the rally site against being reclaimed by the authorities."

Democrat MPs are expanding their rally site near the Samsen railway station.

Additional drinking water, toilet facilities, projectors, lights and speakers have been delivered to the site after people attending the rally on Thursday night complained that they could not see or hear protest leaders on stage. 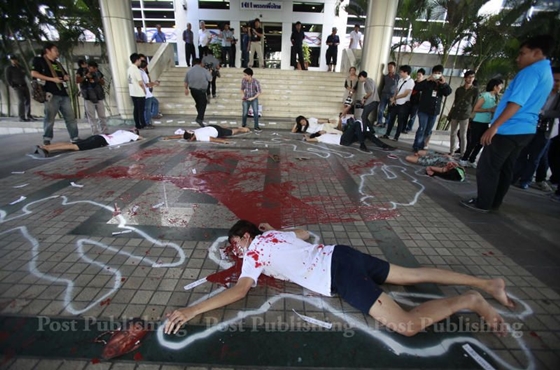 No, that's not the real thing. Here, Thammasat students protest the passage of the amnesty bill in front of the Phue Thai headquarters THANARAK KHOONTON

Meanwhile, Thammasat students opposed to a blanket amnesty have staged an unusual protest outside Phue Thai party headquarters which they say distorts the rule of law. 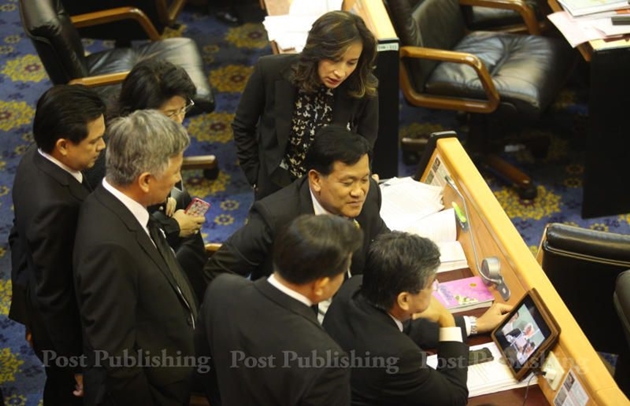 Democrat MPs remaining in parliament gather around the desk of Apirak Kosayothin during a break in the debate to watch a live broadcast from their protest site near the Samsen railway station. They later walked out in protest over the amnesty bill. PANUMAS SANGUANWONG

In the early hours of this morning and after 19 hours of often acrimonious debate, the House of Representatives passed the third and final reading of the controversial amnesty bill sponsored by the ruling Pheu Thai party.

The vote was 310 - 0, as the opposition Democrats had staged a walkout prior to the vote. Significantly, four Pheu Thai members associated with the red shirt movement abstained.

The bill is an amended version approved by a House scrutiny panel, which offers a blanket amnesty for all those involved in political protests from Jan 1, 2004 to Aug 8, 2013, except those accused of violating Section 112 of the Criminal Code, also known as the lese majeste law.

The bill now goes to the Senate for final approval although the Democrats have vowed to petition the Constitution Court to have it revoked.

The passage of the bill is likely to breathe new life into protests organised to oppose the blanket amnesty. The bill's critics say that the amnesty would, once again, allow those involved in politically-motivated violence to go free, ensuring that it would happen again in the future. 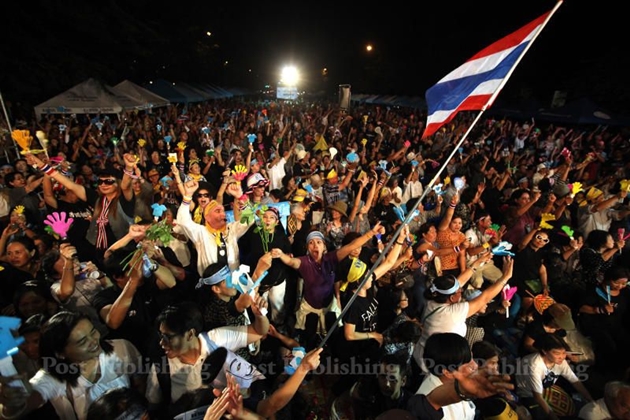 Sounds of whistles filled the air around Samsen railway station yesterday evening as Democrat MP for Surat Thani Suthep Thaugsuban vowed to press ahead with an all-out protest until the amnesty bill is withdrawn.

On the first day of the party-led protest, which drew around 20,000 participants, Mr Suthep took the stage to declare the rally would "go all the way".

He said the protest would not end until Prime Minister Yingluck Shinawatra withdraws the bill from parliament.

"If not, we will keep on fighting," he said. "If the prime minister's conscience is clear and she is aware that she is elected because the people trust her, then she must not hurt the people.

"She should withdraw the bill and announce that she will not do it again. That would be the end of the fight."

Mr Suthep said the Samsen rally was not merely a stage for the Democrat Party, and that the "people's struggle" was open to everyone who opposed the amnesty bill.

He encouraged supporters from outside Bangkok to take a train to Samsen station to join the rally. Protests against the bill are also being staged at various provincial halls across the country. 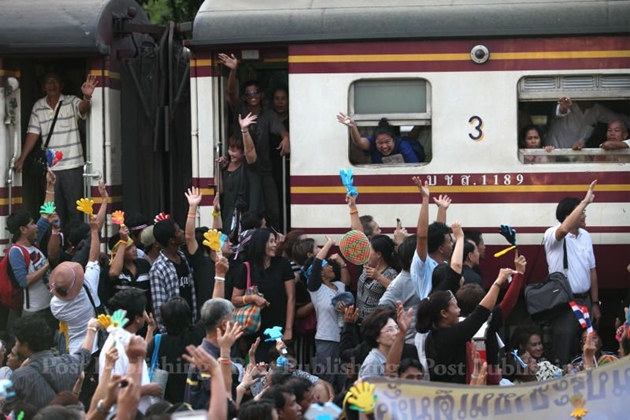 Opponents of the amnesty bill arrive at Samsen station to join the Democrat rally there. PATIPAT JANTHONG

Protesters began arriving at the Samsen rally site yesterday afternoon. Centres for logistical support and food supplies were already up and running, indicating the protesters were gearing up for a prolonged demonstration.

When Mr Suthep took the stage about 7pm, police put the size of the crowd at 20,000.