As night falls, the Democrats are at Democracy Monument after marching most of the day; the Uruphong protest site has been reinforced and a network of business people has held a huge rally in the Silom area – all opposing the Phue Thai amnesty bill.

Very few protesters stayed overnight at the Democracy Monument site, but activites are expected to start about noon when the crowd will increase. Police and city representatives met with protest leaders and worked out an arrangement to keep traffic moving in the area – at least during the day before the expected large crowd arrives.

Meanwhile, at the Uruphong rally, leaders there say there will be movement on November 7, but, like the Democrats yesterday, they didn't say where they would be going.

End of a long day

The Democrats have decided not to return to their cramped base near the Samsen Railway station. Instead, they have set up camp at a much more impressive, more historical site – Democracy Monument on Ratchadamnoen Avenue. All day long, rally leader Suthep Thuagsuban has been quite secretive about what he has planned, so expect some surprises when he takes the stage in the next few minutes. 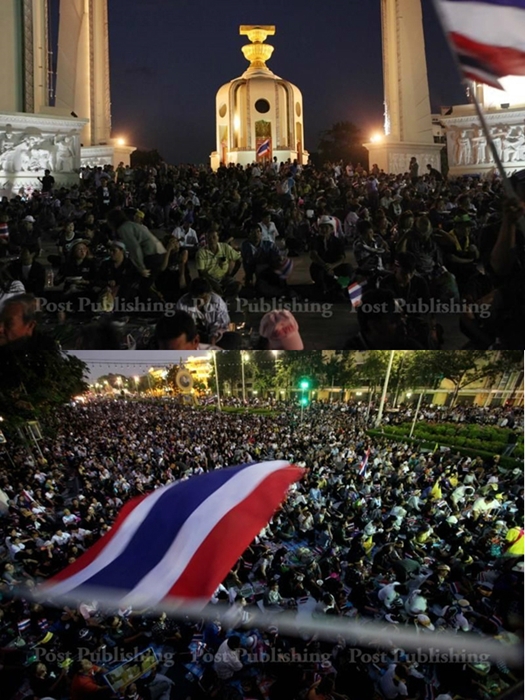 Democracy monument is an impressive location no matter which way you look. PATTARACHAI PREECHAPANICH The Democrats are on the march, headed for the Sanam Luang area and sites of historical and religious significance. PATIPAT JANTHONG

The bandwagon here in Thailand, of course, is the growing opposition to the blanket amnesty bill recently passed by the Phue Thai MPs in parliament. The bandwagon is led by the opposition Democrats as well as civic groups based at the Uruphong intersection.

Just today, however, many more have climbed on this bandwagon. This morning at Thammasat University, more than 700 lecturers, students and staff issued a statement reaffirming the university's stand against the amnesty bill. 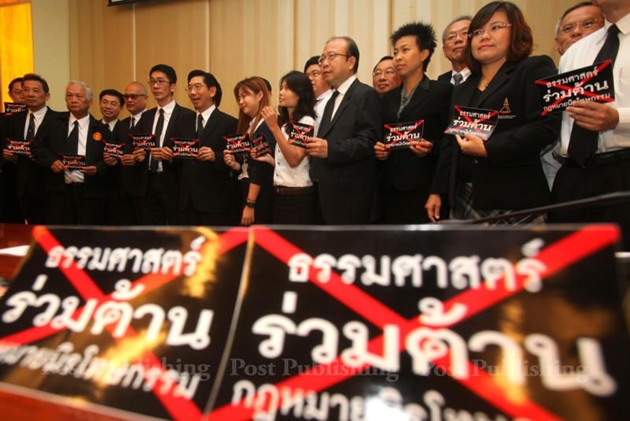 During the lunch hour, members of the Businessmen for Democracy Club and the Green Silom Business Group led by Somkiat Homla-or gathered near the Sala Daeng BTS train station to show their determination to promote a clean democracy and protect the royal institution.

Wednesday it will be Chulalongkorn University's turn to rally against the amnesty bill. Mahidol University academics, staff and students say they will walk to the Uruphong rally that day as well. 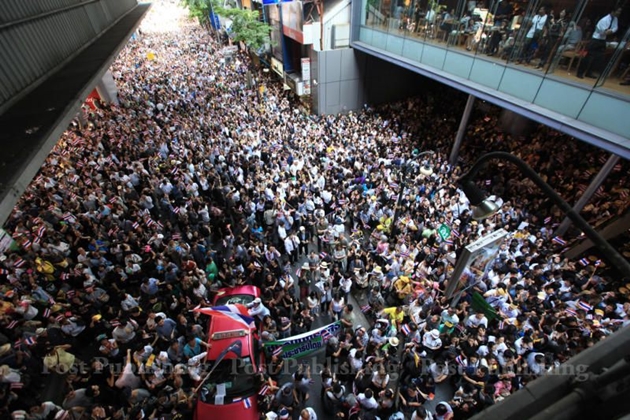 This photo from the Silom rally gives you a sense of the size of the crowd. PHRAKRIT JUNTAWONG 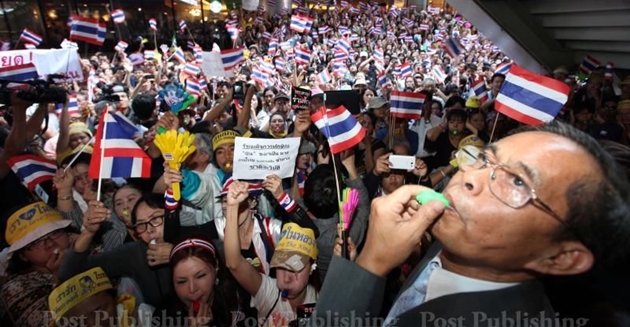 The size and enthusiasm of the Silom "mob," ("crowd" in English) caught organisers by surprise. PATTARACHAI PREECHAPANICH

Organisers of the Silom anti-blanket amnesty "whistle" event said they expected 2 - 3 thousand people. Instead, it appears they may have got 10 times that many. They say they will try again for an even bigger event this Wednesday.

Finally, an announcement of the destination of the march. It's Wat Phra Kaew, the Temple of the Emerald Buddha. That should make for some good photos, a lot better than the Parliament or Government House, which it appears government leaders, thought would be today's target.

Rachadamnoen Avenue is a sea of umbrellas as Democrat marchers try to find some relief from the sun. Meanwhile, Silom is full with people awaiting the whistle blowing event scheduled for 12:34. Democrat leader Abhisit Vejjajiva is among the Silom crowd.

The march has now stopped temporarily near Suphan Khaaw on the way to Ratchadamnoen on the way to Aunusorn Sathan October 14 and then Democracy monument. Leaders are being quite secretive about each destination.

The Democrat's started their march on time at 10:00am and are now nearing Uruphong to show solidarity with the protesters there. The procession is a long one and those interviewed by the Democrat's Blue Sky TV estimate the numbers as between 30,000 to 100,000. Police are likely to have a lower estimate but it is still a substantial crowd for a Monday morning. Blue Sky is broadcasting live on the web. 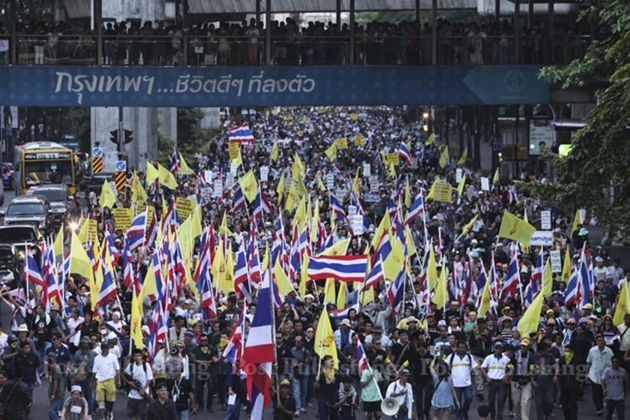 About 2,000 protesters from the Dhamma Army and the People’s Democratic Force to Overthrow Thaksinism march from Lumpini Park to the Uruphong rally site where they join forces with the Network of Students and People for Reform of Thailand to scale up the protest. PATIPAT JANTHONG

The Democrat Party will lead a march of opponents to the government's blanket amnesty bill from Samsen railway station across Bangkok today in a stepped up campaign against the law change.

Democrat heavyweight Suthep Thaugsuban declined to identify the destinations of the march but a well-placed party source said the move, which will begin at 10am, is aimed at paralysing traffic in the capital to press for an end to the bill. 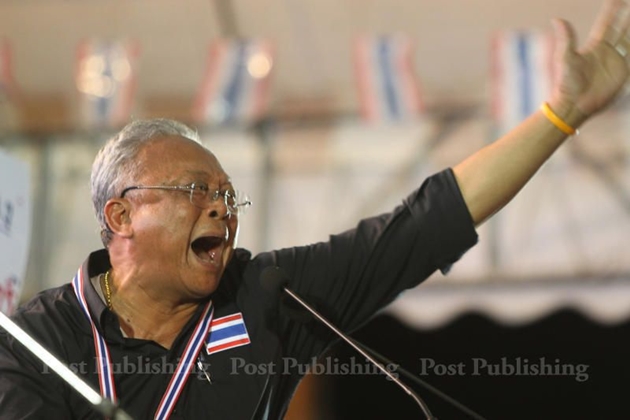 An animated Suthep Thuagsuban tells the Samsen crowd that the Democrat party was about to ramp up its protest over the blanket amnesty. PORNPROM SATRABHAYA

The strategy comes as the rally at the Uruphong intersection is shaping up as a new focal point of opposition to the bill, after protesters agreed yesterday to let an anti-Thaksin coalition of civic groups take the lead in their campaign.

Attention is also focused on Silom today with business groups coming out onto the streets to air their opposition to the bill.

With only 1,000 protesters in attendance at the beginning, the rally at Uruphong, which was engineered by the Network of Students and People for Reform of Thailand, is gathering pace. Now there are at least 3,000 people at the anti-government demonstrations since the Dhamma Army and the People's Democratic Force to Overthrow Thaksinism (Pefot) joined them from Lumpini Park.

The groups decided to unite and work out future action under the leadership of a coalition, which has yet to be formally named, and comprises civic groups from 77 provinces. The Dhamma Army has close connections with Chamlong Srimuang. The groups also agreed to give leadership to Somkiat Pongpaiboon, a key figure of the coalition, they said.

Uruphong protest leader Nitithorn Lamlua welcomed the decision for unification as all groups shared the same goal to oust the government of Prime Minister Yingluck Shinawatra.

Mr Somkiat and Suriyasai Katasila announced the decision to close the Lumpini rally site to their supporters.

Democrat list-MP Korn Chatikavanij posted a message on his Facebook page yesterday urging people in the business area of Silom to blow whistles to oppose the amnesty bill today at 12.34pm.

Mana Nimitmongkol, director of the Anti-Corruption Organisation of Thailand, said a network of businessmen will rally to mobilise white-collar employees in the Silom area against the bill, with about 10,000 whistles to be handed out to participants.

Seventy families of royal descendants from past monarchs of the Chakri Dynasty yesterday also voiced opposition to the amnesty bill. 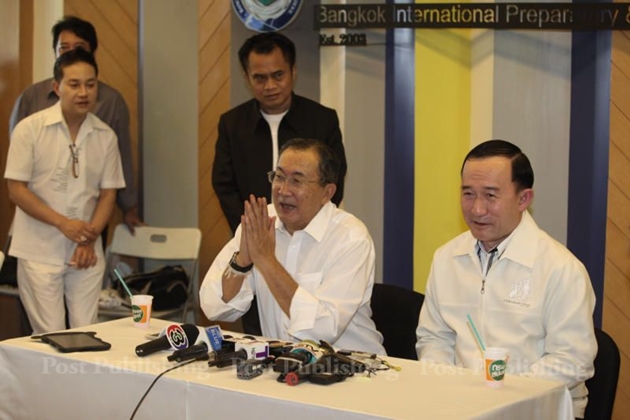 Maj Gen M C Chulacherm Yukol said the 70 royal families agreed at a meeting yesterday the blanket amnesty bill was flawed and the government should not submit the legislation, if approved by the Senate, to His Majesty the King for royal endorsement.

A group of 578 lecturers of Thammasat University yesterday also issued an open letter opposing the amnesty bill and calling on the Senate to reject it.

Meanwhile, the Democrat Party will begin its nationwide campaign against the bill today, starting in Phetchaburi, said Alongkorn Ponlaboot, a deputy party leader.

Mr Alongkorn called for the Senate to reject the amnesty bill, which has been passed by the House of Representatives.

A petition will also be filed with the Constitutional Court to rule on the constitutionality of the bill.

The Democrat Party will also file a no-confidence complaint against the government, which has damaged the country's credibility in its administration, he said.