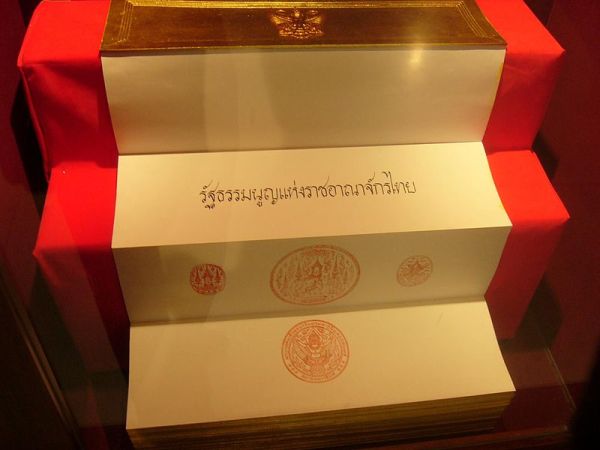 "The original copy of the Constitution of the Kingdom of Thailand, Buddhist Era 2550 (2007), to which His Majesty King Bhumibol Adulyadej affixed his signature and his Regnal Seal (the Seal of the Garuda) and to which the three Great Seals (from left to right: the Seal of the Great Mandate, the Seal of the Celestial Elephant, and the Seal of the Phoenix Castle) were also affixed. The Constitution was written on traditional Thai book with golden front and back covers and is placed in safekeeping at the National Assembly of Thailand along with the copies of the other constitutions." (Source: Wikipedia)

Section 309 'will cause govt most problems'

As critics of the amnesty bill are stepping up pressure on the government and the Pheu Thai Party to abort it, academics are confident it will be axed by the Constitution Court.

"The law and the process are in violation of the constitution," said Prinya Thaewanarumitkul, vice-rector of Thammasat University.

The Democrat Party has vowed to launch a legal challenge to the amnesty legislation once it passes the parliamentary process.

Prime Minister Yingluck Shinawatra cannot forward it to His Majesty the King for royal endorsement until the court gives a verdict, he said.

The section states that all acts undertaken in the 2006 charter "shall be deemed constitutional under this constitution". It apparently refers to the cases handled by the Assets Scrutiny Committee (ASC) set up by the coup-makers to probe irregularities in the then government led by Thaksin Shinawatra.

The amnesty bill, which was approved by the House on Friday and is expected to be tabled for senators to debate some time before Nov 11, seeks a blanket amnesty.

It would cover all actions from 2004 including those taken by the ASC and the National Anti-Corruption Commission (NACC), which took over legal cases from the ASC after it was scrapped.

The process is a problem as the bill's intention was distorted from the original objective of giving amnesty only to protesters and the public who took part in the political unrest, Mr Prinya said.

A House committee vetting the bill expanded the coverage of the amnesty to include politicians, protest leaders and officials responsible for the protests after the coup. The bill was then returned to the floor on Thursday for the second and third readings.

Mr Prinya said that in his view, the two issues have sufficient grounds for the court to rule against it becoming law.

Seree Suwannapanon, a former senator who wrote the charter, pointed to the attempt to overrule Section 309 as the main issue for the court.

All cases decided by the ASC and NACC are legally recognised by the charter and the bill's intention to scrap it violates the constitution, he said on Facebook yesterday.

If the bill becomes law, Thailand's credibility in the eyes of the international community on attempts to crack down on corruption will be shattered, he added.

The cases having been finalised include a conviction for abuse of authority against Thaksin in relation to the Ratchadaphisek land deal in 2008, and the state's decision to seize 46 billion baht of his assets in 2010 after he sold his stake in Shin Corp to Temasek Holdings of Singapore.

"The controversy over the amnesty bill will eventually end in the court", Mr Prinya said, adding the protests against the bill now could not change the course of the bill.

Government chief whip Ammuay Klangpa has defended the bill, saying on Saturday that reconciliation will not be achieved unless all people are granted an amnesty and all cases are abolished.