(Breaking) The Phue Thai party has just announced that if the Senate rejects the amnesty bill, it will not resubmit it to parliament after six month and it is withdrawing all other amnesty-related bills from consideration. 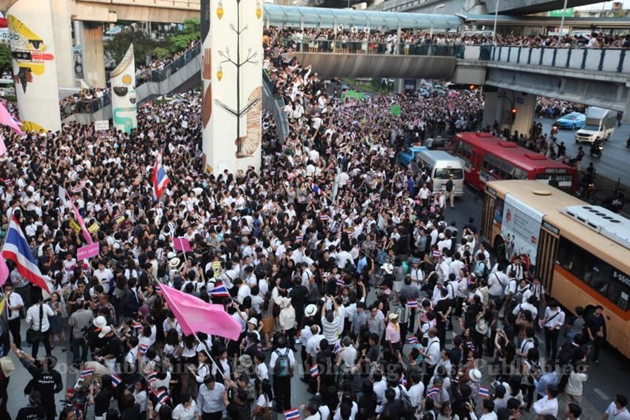 Students and staff of Chulalongkorn yesterday added more than 10,000 people to the bandwagon in opposition to the blanket amnesty bill. PATTANAPONG HIRUNARD

17:52  The Phue Thai party has just announced officially that it will accept the decision of the Senate on the amnesty bill passed by parliament. Furthermore, if the Senate rejects the bill, the Phue Thai party will not resubmit it in 6 months time. In addition, it will also withdraw other amnesty-related, reconciliation-related legislation currently before parliament.

The instant reaction from Democrat Wittaya Paradai was negative, however. He said that from experience, the Phue Thai party was simply playing a waiting game. What should be done, he said, is for the Senate to accept the bill, and then it should be immediately amended so that the amnesty covers only protestors who defied laws such as the emergency decree. It should not cover criminal acts, acts of corruption and it should not cover the lengthy time period it now does, he said. All this could be done in a single day, he said.

People tend to climb on popular bandwagons very quickly and that is the case today. Here are some of the latest developments.(To find out more about what a bandwagon is, see the story below.) 16:00 Yet another group of students and teachers march, this time near the Asoke intersection. PATIPAT JANTHONG 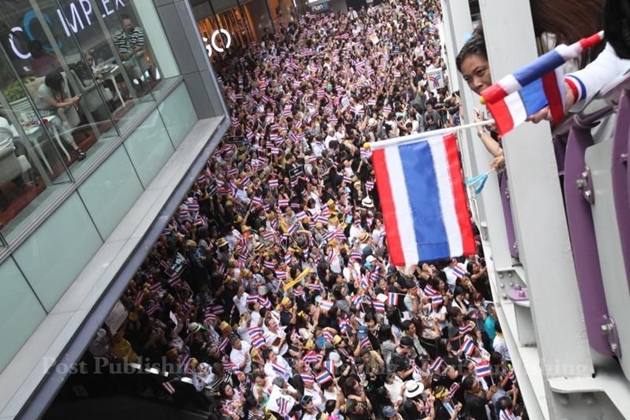 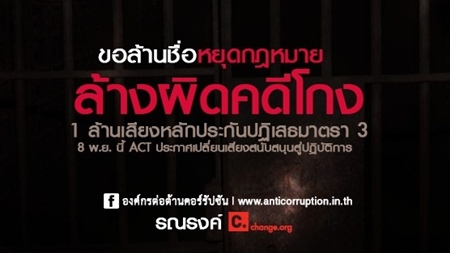 As of 14:45 this online petition against the amnesty bill had reached 579,000 names. The goal is at least one million. 14:45 Another group of 500 hospital employees has jumped on the bandwagon, this time from Maharat Nakhon hospital in Nakhon Ratchasima despite warnings from the health minister. PRASIT TANGPRASERT 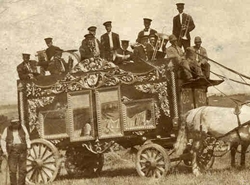 "Bandwagon" originally referred to the large vehicle carrying a circus band around an area to create excitement and promote ticket sales.

The concept of the "bandwagon" is often used in English to describe an activity, trend, or fad that is rapidly growing in popularity or influence.

Bandwagon certainly seems an appropriate description for the push here in Thailand to reject the blanket amnesty bill recently passed by the House of Representatives. Thousands more people are jumping/climbing on the bandwagon every day.

The Democrat party has been in the lead since the beginning, first through its failed effort to defeat the bill in parliament, and then through its mass rally near the Samsen railway station which has since moved to Democracy Monument in the Ratchadamneon Avenue area.

Democrat leaders last night vowed to continue, even escalate, their protest despite signs the prime minister was backing away from trying to push the bill through the Senate. The government will let the Senate decide freely, she said. 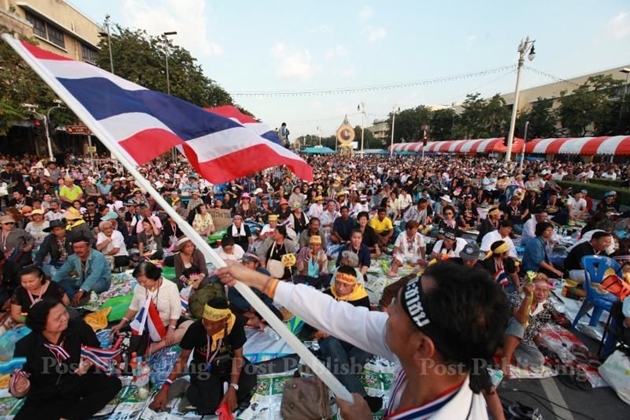 The Democrats have taken over the Democracy Monument area for their protest. KITJA APICHONROJAREK

A second, long-running protest site is near the Uruphong intersection. The leaders, many associated with the PAD group which led the mass protests in 2006, has a broader aim than simply killing the amnesty bill. It wants to oust the current government and to rid the country of the influence of Thaksin Shinawatra. Yesterday, a group of 500 members from Dhamma army moved from Uruphong to Phan Fa to set up yet another protest site. 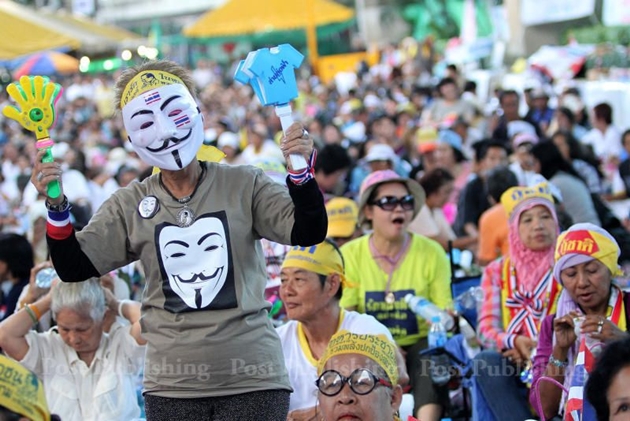 Protesters at the Uruphong site have been calling for the ouster of the government. PATTARAPONG CHATPATTARASILL

What makes this bandwagon different from previous protests, however, is that it extends far beyond political parties and protest groups.

Students and staff from major universities throughout the country, for example, have staged rallies of their own.  On Monday, rectors of 14 universities issued a statement opposing the amnesty bill, saying it would cause the people to believe that corruption is not a serious matter because those who commit it would eventually be absolved of wrongdoing by an amnesty. 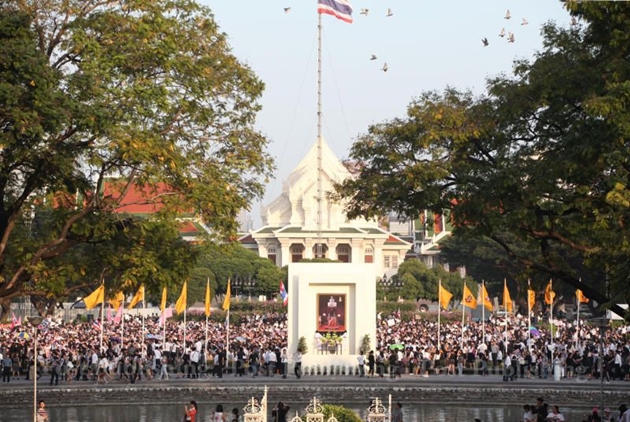 Chula staff and students gather at the university before beginning their march. SEKSAN ROJAMETHAKUL

Yesterday, more than 10,000 students and staff of Chulalongkorn University staged the most impressive university rally yet, marching to the Bangkok Art & Culture Centre and snarling traffic in the Siam Square area.

At the Centre, CU president Pirom Kamolratanakul said the passage of the bill by the House was hasty and irregular.

"The bill will benefit the corrupt," he said. "Education institutions have a responsibility to teach students to be ethical people." 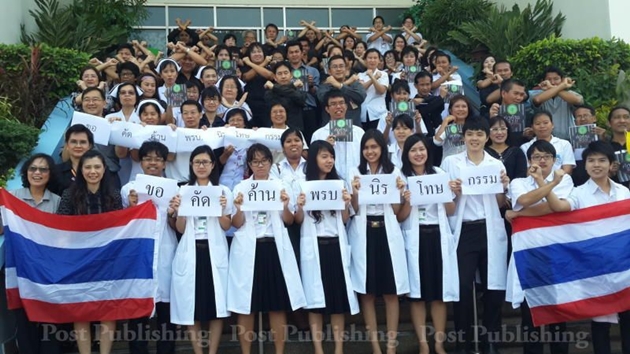 Medical students and staff of Ratchaburi Hospital hold a rally against the amnesty bill. SUNANT OCHAKACHORN

Hospital staff and medical students have also staged rallies in many areas of the country. Yesterday it was the turn of Ratchaburi hospital where about 100 students and staff demonstrated their opposition to the bill.

Heavyweight opposition is growing as well. Yesterday, 63 judges condemned the government's blanket amnesty bill, saying it will destroy the rule of law and set the wrong precedent for society. 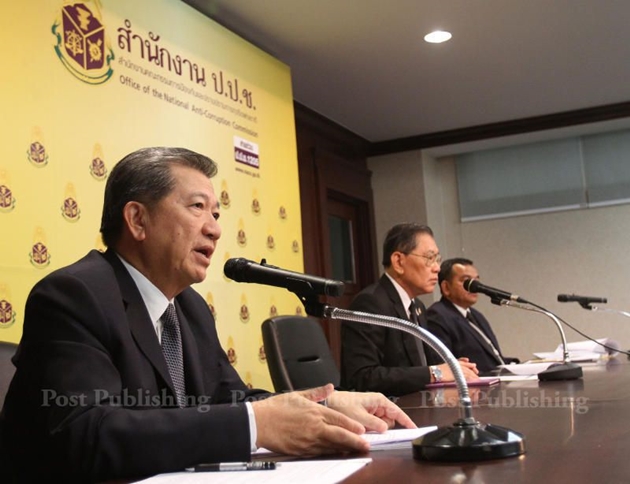 NAAC commissioners voice their concern that the blanket amnesty could affect thousands of their cases. PATTARAPONG CHATPATTARASILL

Civic groups opposing corruption have issued statements on several occasions. Yesterday, the National Anti-Corruption Commission (NACC) voiced strong opposition to the bill. NAAC commissioner Vicha Mahakhun said his agency is concerned that thousands of corruption cases it handled would be affected if the bill is enacted. About 200 staff of the Commerce Ministry gather near the offices to protest the amnesty bill. PATTARAPONG CHATPATTARASILL

In one particularly embarrassing incident for the government, about 200 Commerce Ministry staff rallied against the amnesty bill near their office in Sanambin Nam yesterday.

The protests are by no means finished. Today, during the noon hour, thousands of whistle-blowing protesters are scheduled to gather in Silom for what is sure to be a colourful rally. 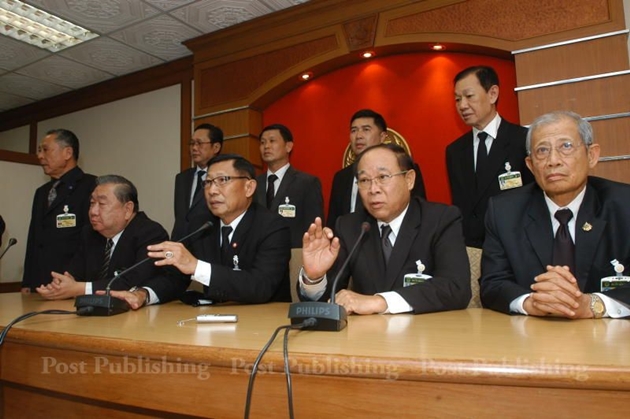 Senate Speaker Nikom Wairatpanich, accompanied by a group of elected senators, said at a press conference that the amnesty bill will not pass the Upper House. POST TODAY photo.

The bandwagon seems to have had an effect. Senate Speaker Nikom Wairatpanich, accompanied by a group of elected senators, said at a press conference yesterday afternoon that the Senate would not pass the bill, which would then have to return to the House of Representatives.

The Lower House is legally required to wait 180 days until it can adopt the bill for confirmation. Few expect the House MPs will push for its final passage.