Huge crowds flocked to the anti-government rally at Democracy Monument (photo) yesterday and marches have taken place all day today. As night falls, two ministries are in protester hands. Meanwhile pro-government red-shirts hold their own mass rally at Rajamangala stadium. 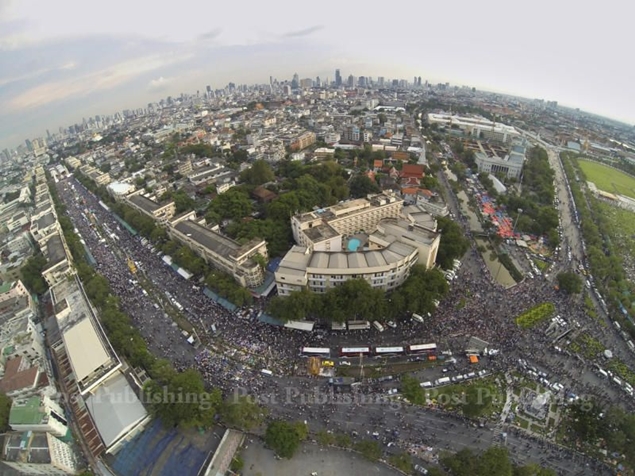 By afternoon yesterday, the huge crowd stretched from Sanam Luang (right) alway the way to a distant Democracy Monument (far left) and beyond. SITHIKORN WONGWUDTHIANUN

This is going to be a busy news day and I'll have updates as the events happen. Here is a start with excerpts taken from stories in this morning's Bangkok Post.

As night fell, another group of protesters, this time members of the Network of Students and People for Reform of Thailand, occupied a second ministry, the Foreign Ministry. They promised not to go inside the buildings themselves and said this was a warning to foreign countries not to deal with the Yingluck government. 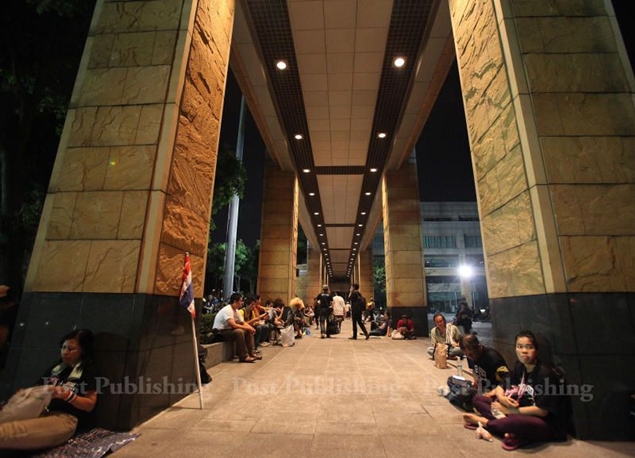 Members of the Network of Students and People for Reform of Thailand make themselves comfortable inside the compound of the Foreign Ministry. PATTARAPONG CHATPATTARASILL 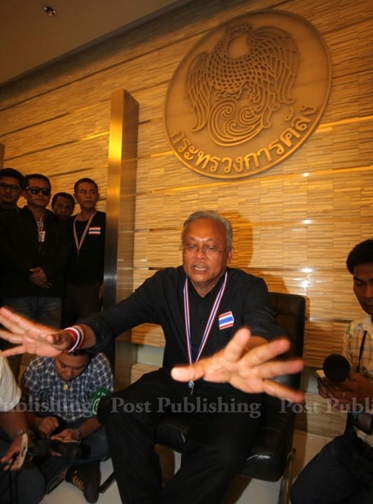 Suthep Thuagsuban talks to the media at the Finance Ministry

Here is more on the takeover of the Finance Ministry:

At the offices of the Budget Bureau and the Finance Ministry, anti-government protest leader Suthep Thaugsuban instructed the protesters to go into the offices.

Mr Suthep told them to go to every floor, enter every room, give flowers to civil servants and just sit still. He told them not to damage state property as that was paid for by taxpayers' money.

"I ask civil servants to stand side-by-side with the civilians.

"The Budget Bureau and the Finance Ministry are the heart of the Thaksin regime so we'll seize them from today onwards. I ask the people to enter peacefully, and we'll show what the true power of the people is.

"If they [the government] don't surrender, we'll occupy all the ministries," the former Democrat Party MP said. 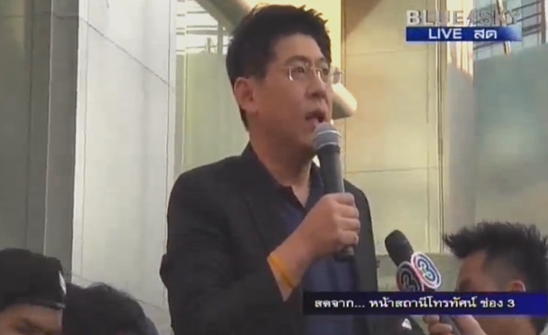 Sorayuth talks to protesters outside Channel 3.

March leaders at Channel 3 had difficulty getting protesters to leave. They insisted on hearing from well known news presenter Sorayuth Suthassanachinda for a second time. Many do not believe he has been reporting fairly. March leaders made protesters promise to leave if Sorayuth addressed them. After a lengthy wait, Sorayuth came down and promised to report fairly, but faced a rather difficult crowd. He encouraged them to continue express their views in a peaceful way. He was presented with roses and a whistle as he left.

Pol Maj Gen Piya Uthayo spokesman for the Centre for the Administration of Peace and Order (CAPO) says the situation is in general well under control except for the Finance Ministry which protesters have illegally occupied, cut electricity and "forced" out those working there (strongly disputed by Blue Sky TV presenters.) He also said the protesters had weapons with them. 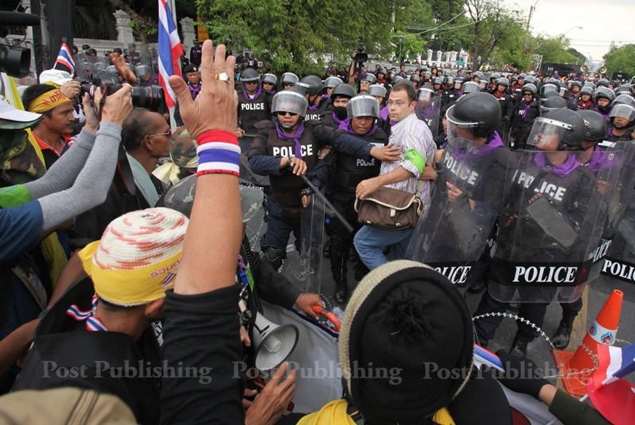 In an incident at the protest outside metropolitan police headquarters that is sure to get international attention, well-known foreign journalist Nick Nostitz who has covered Thai political protests for many years was attacked by protest guards. He apparently got into an argument with a guard who was preventing him from taking photos and was then accused of being a red-shirt supporter. That quickly put him under attack but he was helped out of harms way by police. He has filed a complaint with police.

Mr Suthep has entered the Finance Ministry and is apparently trying to find out if the minister Kittirat Na Ranong is in the building. A Bluesky TV reporter confirms that electricity has been cut to parts of the building.

Meanwhile, here's an update on the situation at national police headquarters from our online reporters. 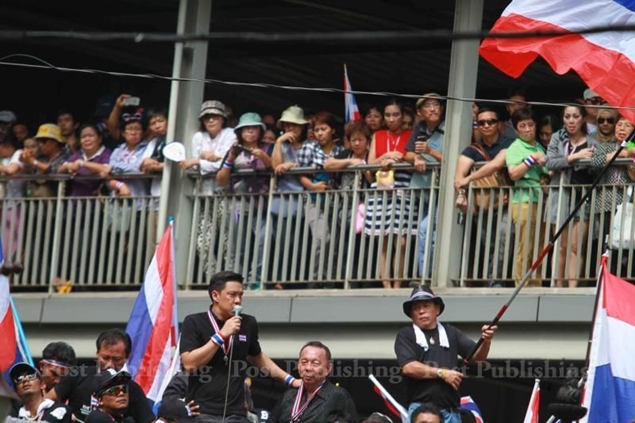 Anti-government demonstrators who walked to the Royal Thai Police head office on Rama 1 road in Ratchaprasong area demanded a meeting with national police chief Adul Saengsingkaew, but were told he was in a meeting at Government House.

The group of marchers led by former Bangkok MPs Phutthipong Punnakan arrived at the national police office, where they were joined by large numbers of supporters who made their own way there. As the crowd grew they blocked Rama 1 road and occupied the skywalk linking Siam Paragon and CentralWorld.

The police sent Pol Gen Udom Raksilatham out to negotiate with the crowd. He said the police chief was at  Government House. Mr Phutthipong sought the agreement of the protest supporters, who said they would wait and meet only with Pol Gen Adul.

The protesters remained in front of the national police office as of 2pm.

14:20  All of a sudden there is what could be a major development, according to Blue Sky TV. Rally leader Suthep Thuagsuban's crowd is entering and taking over the Budget department, a vital government centre, he says. He tells them to not to destroy anything. Latest: Electricity has been cut to the Budget department and Finance Ministry and civil servants are leaving.

Meanwhile, there is a very large police presence near Wat Bavorn Niwet to counter an attempt at taking over Government House.

And at the Metropolitan police headquarters, Chumpol is still calling for the police chief (Kamronwit) to come out. Otherwise they the protesters won't leave, he says. His language is no longer so polite. 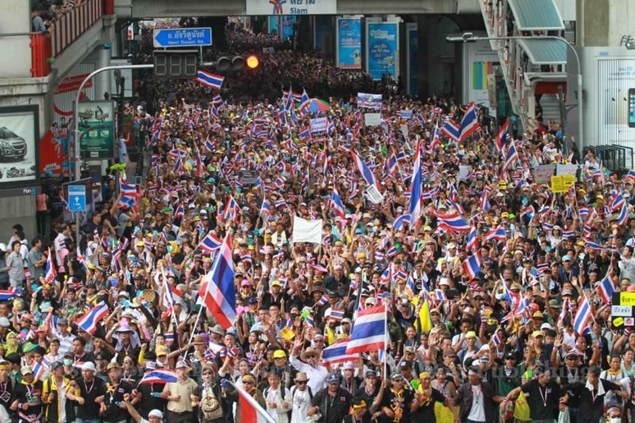 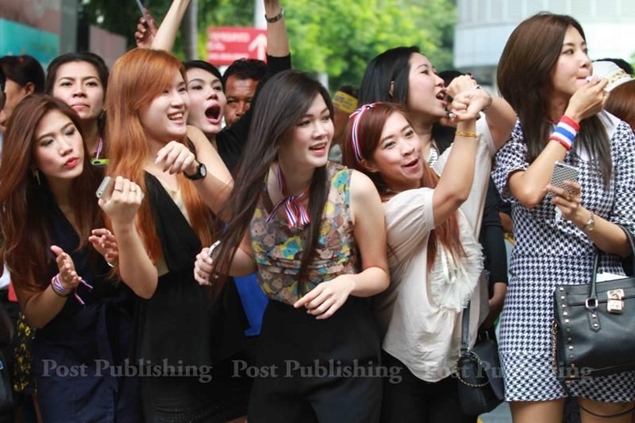 It looks like former Democrat MP Puttipong Punnakan for Bangkok who is leading the march to the national police headquarters might have a fan club. SOMCHAI POOMLARD. 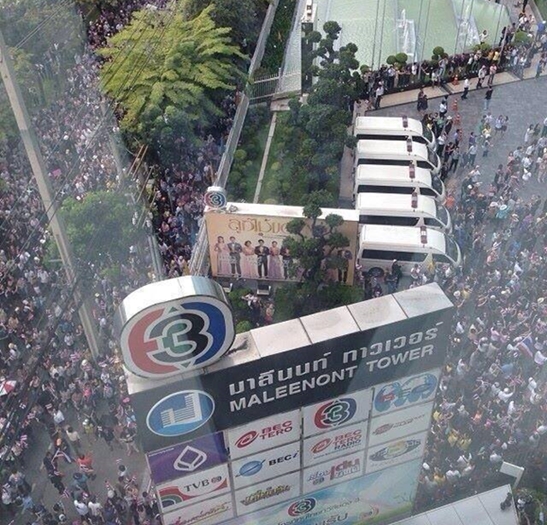 Another group has reached on of the media targets, Thai TV Channel 3. Photo from Democrat MP Sirichok Sopha's Facebook page.

The speaker outside Channel 3 asks the station to be neutral, not another government channel under the Department of Public Relations. The sign behind the speaker says "Elected Dictatorship in not democracy."

12:20 After a cabinet meeting the Prime Minister says she has no intention of resigning or dissolving parliament. Meanwhile, Suthep Thuagsuban has reached the Budget Bureau where he demanded the whole cabinet resign and asked for the support of civil servants inside. Outside Metropolitan Police headquarters it is a waiting game. Leaders are refusing to leave until city police chief Lt.Gen Kamronwit meets with them. Thai PBS reports, however, he is not in the building. At Army headquarters another group, led by Ekkanat Prompan is also waiting for a response from Gen Prayuth. It's been silence so far.

Here is more on the situation at the Metropolitan Police headquarters from Bangkok Post online reporters: 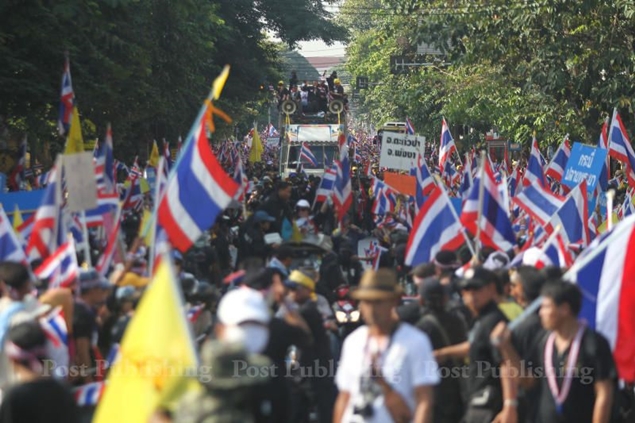 Chumphon MP Chumpol Pholsai led supporters to the MPB office on Ratchasima road about 10am, but they did not get to meet metropolitan police chief chief Kamronwit Thoopkrachang, who was said to be busy somewhere else.

Then a senior police officer threatened marchers with arrest, warning that the area was under the the Internal Security Act, the crowd became restive and angry. Cries of "Jai yen, jai yen (keep cool, keep cool)," were heard coming from leaders.

Mr Chumpol later spoke from a mobile stage saying that the demonstrators came with good hearts and the  police on duty were paid to guard the office.

He said it was heart-touching that people who burned the city (in 2010) get 7.5 million baht compensation, but soldiers and police stationed in the restive provinces of the deep South get only a small amount.

The two sides held discussions and  eventually the demonstrators were allowed to present flowers and whistles.

11:00 At Metropolitan Police headquarters a high-ranking officer (not Lt-Gen Kamronwit) has come out to receive flowers from women in front of police lines. The area is very crowded but the atmosphere seems more relaxed than it was. The rally leader calls the officers, "police of the people" Meanwhile, Suthep Thuagsuban's procession, probably the biggest of the 13, continues, without incident, the six kilometre walk to the Budget Bureau. They are presently walking on Rama 6. Blue Sky TV reports people are waiting at various TV channels for their processions to arrive.

10:15  A very long rally procession has been stopped before getting to the Metropolitan Police headquarters and a very public, noisy and emotional negotiation is going on between leaders on a soundtruck and police. Protest leaders want to talk to the boss Lt. General Kamronwit. (10:27 The standoff continues only noisier.) 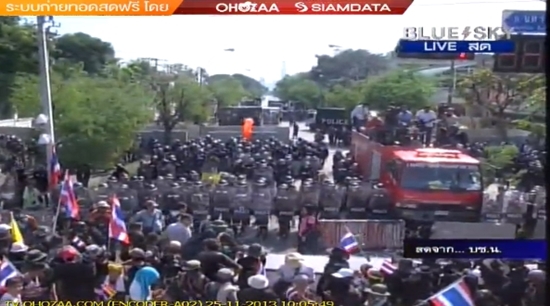 9:30  Most of the 13 groups have now started their marches, with surprising large numbers of people in each. Thai PBS reports that about three groups are still waiting to leave. There are also groups of protesters waiting at each destination. There was special interest at TV Channel 5 where Prime Minister Yingluck Shinwatra was supposed to arrive to tape a birthday message for His Majesty the King. Blue Sky TV has just reported that the marches are taken 25 different routes. Thai PBS reports that visit has now been cancelled. Meanwhile, at Rajamangala, red-shirt leaders are on stage commenting on the day's events, saying the marches will not succeed in creating any changes. They say they tried the same tactics against the Abhisit government and failed. 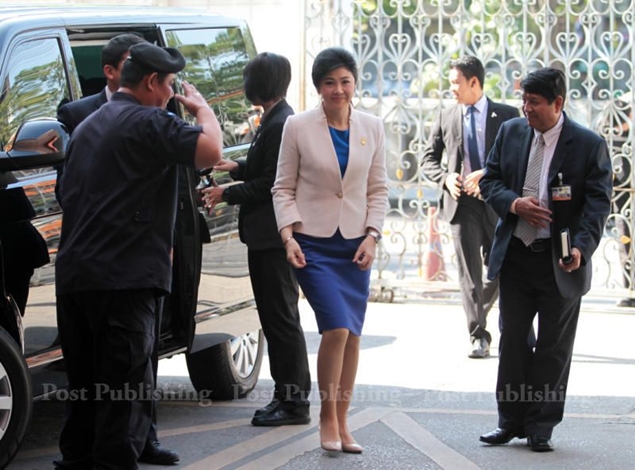 A smiling Prime Minister Yingluck Shinawatra arrives at Government House about 9:30 this morning. It may not be so easy to leave as several groups of protestors are in the area now. CHANAT KATANYU

8:55  The marches have started from Democracy Monument. They appear to have had some minor difficulties getting a clear path out of the area, but the marches are on. 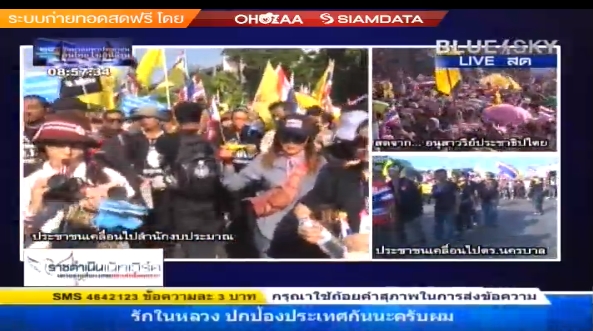 Anti-government protesters estimated by some in the hundreds of thousands have joined Sunday's rally at the Democracy Monument with organisers still hoping the number will swell to one million. 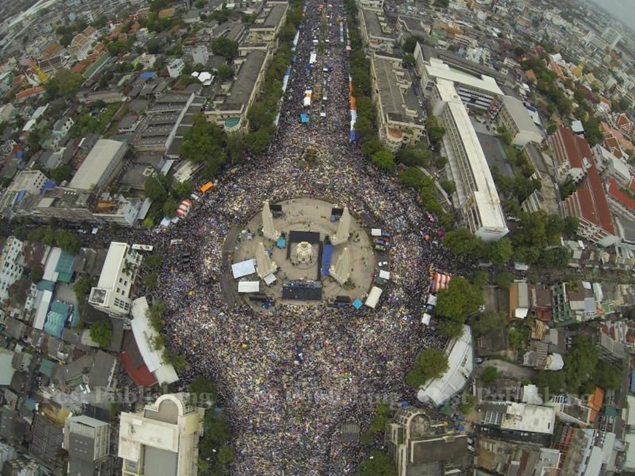 By Sunday afternoon, Ratchdamnoen Avenue, where the Democracy Monument is located, was packed with at least 100,000 people, according to police estimates. A military intelligence unit estimated 150,000 people were there.

Many had come from the provinces, mostly the South, where the opposition Democrat Party has a strong following. 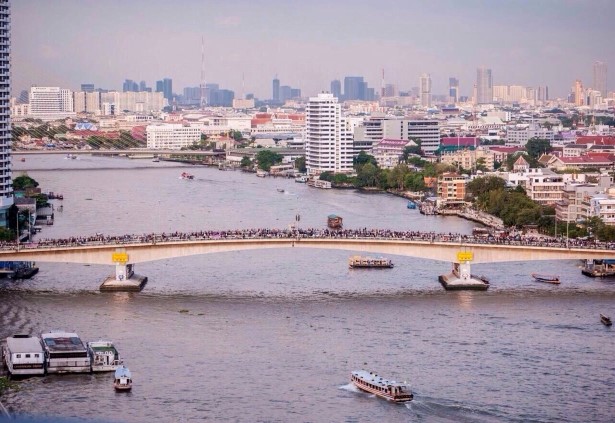 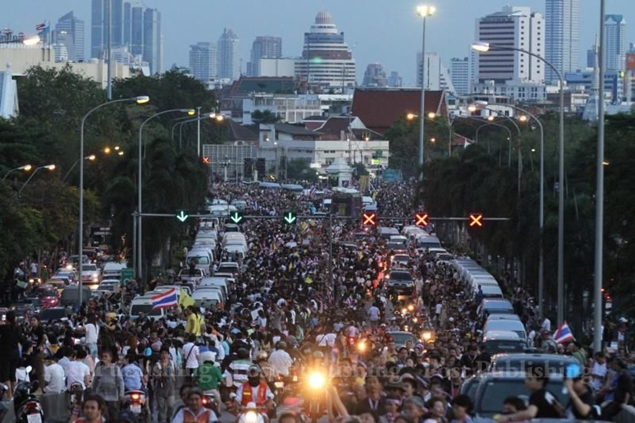 The crowd leaves the bridge to enter the rally area. PHRAKRIT JUNTAWONG

Ekkanat Prompan, a spokesman for the Democrat Party-led rally, said more than 400,000 people had joined the protest since Sunday afternoon and the number should increase to one million by the evening.

"Protest core members have made a million stickers to give to the people who take part in our rally and over 440,000 have already been given out to the public from Sanam Luang to Larn Luang," Mr Ekkanat said. 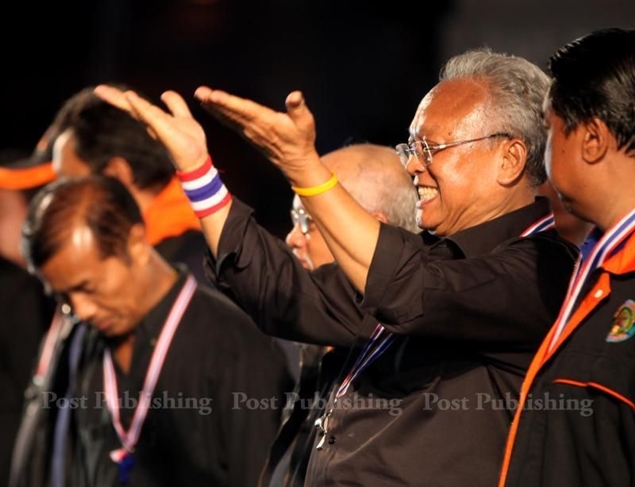 Mr Suthep said the ultimate goal of the protest is to uproot the Thaksin regime and the protest will not end unless the goal is achieved.

However, Mr Suthep maintained that the battle would not last long. "This battle will end in three days," he said.

Addressing the crowd last night, Mr Suthep said protesters would break up and travel to 13 locations today, starting at 8.30am. They include five television stations, military installations, the police and government premises. 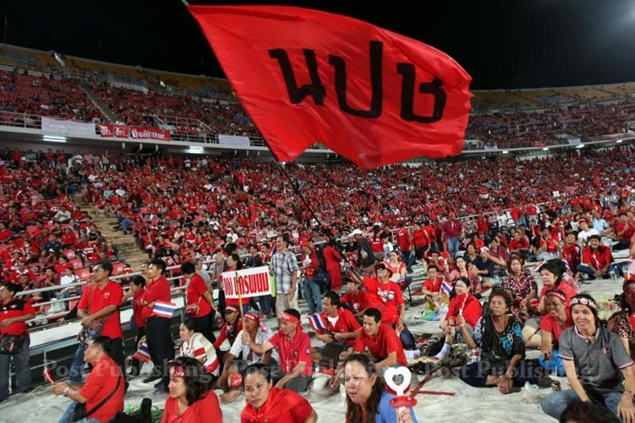 Meanwhile, red-shirt supporters have departed in their thousands from their home provinces, mostly the North and Northeast, to join the United Front for Democracy against Dictatorship (UDD) rally at the Rajamangala Sports Stadium in Bangkok's Hua Mark area. As they poured into the stadium early Sunday evening, organisers said 100,000 had arrived, while other watchers said it was more like 40,000.

Deputy Commerce Minister Nattawut Saikuar, also a red shirt co-leader, said UDD supporters will not move out of the Rajamangala Sports Stadium for fear of confrontation with opposing groups.

He said the Democrat-led protest was only a pawn in the chess game. The people behind it were playing a major role in mounting pressure on the government to eventually bring it down with methods outside the democratic system.

The Democrat Party should review its role since it was being used as a tool to destroy democracy, Mr Nattawut said.