More+
From Starbungs to Bung's Tears, but business is good
Learning
Advanced news

A court battle with corporate coffee giant Starbucks over intellectual property rights became a blessing in disguise for a famous coffee stall once named "Starbung Coffee".

Roadside coffee vendor Damrong Maslae, previously known only among locals and tourists on Phra Athit Road, was painted as a hero of the small people on social media sites over a trademark infringement case against the multinational coffee chain.

Damrong continued to use his copycat logo for over a year despite the legal objection of Starbucks. The street barista eventually relented, surprising his customers by changing the name of his stall to "Bung's Tears", and putting up a sign showing a man in a Muslim cap crying. This replaced the few-week-old "Style Bung Coffee" sign, which was the initial substitution of the contentious "Starbung" logo.

At the lower right corner of the "Bung's Tears" sign, however, text informs us that the sign is just a temporary one. Some liked the new logo for its sarcasm, while others disapproved of it for being too sad.

"I need to keep my sense of humour on the logo," said the 43-year-old owner.

Though the months-long case's outcome disappointed some of Damrong's social media fans and customers, the out-of-court settlement with Starbucks has had a positive impact on the street vendor.

While Starbucks successfully maintained its trademark, Damrong won international recognition, being featured in media across the globe, including Time's newsfeed, The Guardian and the South China Morning Post.

"This is a win-win case," said Wutnipong Warakraisawad, director of administrative affairs at Bangkok University's School of Entrepreneurship and Management. "Bung became known to the crowd outside [Damrong's] neighbourhood."

As an underdog being sued by a giant, Damrong garnered much support from those who admired his bravery in his fight against the business titan. Some, on the other hand, found the sign too similar to that of Starbucks', believing Damrong should indeed take down the green logo, which he claimed represented his Islamic religion.

Starting his coffee stall without a name in 2008, Damrong was given the nickname "Starbung" by young customers from the nearby universities. "Bung" is a friendly term meaning "brother" in Malay.

Laem Phujadkuan, a famous political cartoonist from the Manager Group, was a regular customer and created the parodic logo in late 2010. The round sign was green and white, and featured a Muslim man in its centre.

Laem meant the original Starbung Coffee logo as parody, not trademark infringement. It never crossed his mind that the coffee giant would file a lawsuit against a street vendor. Everyone knew the logo was created out of a sense of humour, he said.

But the cartoonist realised later that ''Starbucks wasn't laughing along'' when Damrong was contacted by a Thai legal firm representing the multinational.

''I didn't mean to violate the law,'' said Damrong. ''But I couldn't understand the legal terms in the formal letter.''

This was the reason he kept the controversial sign on his stall for several months after receiving the notice.

Damrong never expected a global coffee chain with thousands of outlets worldwide to risk its reputation on a small street vendor who couldn't possibly be a business rival. His coffee is sold for 15 to 25 baht per cup. He must sell at least four cups of coffee to be able to buy a single iced Americano from his so-called competitor.

Damrong's position was further strengthened when an American customer told him that anyone from the United States could differentiate between Starbucks and Starbung.

The prices alone could never cause anyone to mistake Starbung for the famous Starbucks, said Wutnipong. The Starbung logo probably wasn't created to lure customers into thinking that they were buying Starbucks coffee, but the he said that such parody certainly benefited Damrong.

An infringed logo doesn't have to share an exact element of a copyrighted font, shape or style, explained Wutnipong. If a logo reminds a customer of another logo at first glance, it is considered infringement. It is standard practice for a copycat to be withdrawn, and Damrong eventually agreed to design his own logo for Bung's Tears.

But the Starbucks image might have been slightly damaged for protecting their own trademark, said Wutnipong. In this case, most Thais felt the street vendor was being bullied by the coffee giant over a trivial issue.

Like it or not, his logo has become a main attraction in the area, drawing a larger crowd for reasons other than the taste of his brew. Many came to take photos of the new logo, while others encouraged Damrong to start a franchise. Since the logo dispute, his sales volume has increased dramatically from 50 to 100 cups to more than 150 to 200 cups per day.

Damrong doesn't agree with the idea of franchising his business, he said, but that doesn't mean the stall vendor isn't a visionary. He wants a sole vending cart to keep his brand unique, so customers will have to come to Phra Athit Road if they want to taste his coffee.

''It's the only place in the world [to buy it],'' he said. After the settlement, the coffeemaker had to thank Starbucks for making him world-famous.

''I'm planning to serve my coffee in a mug with my own logo on it,'' Damrong said.

Note: In a statement issued by Starbucks earlier this month, the company said it didn't wish Damrong to cease business operation, but to use a different logo. It had tried to settle the case informally but Damrong refused to take down the sign, forcing the company to take legal action.

The Starbung Coffee owner eventually agreed on Sunday to replace the sign with Bung's Tears - one day before the case's judgement. Starbucks did not release a statement after the settlement and declined to comment on the issue. 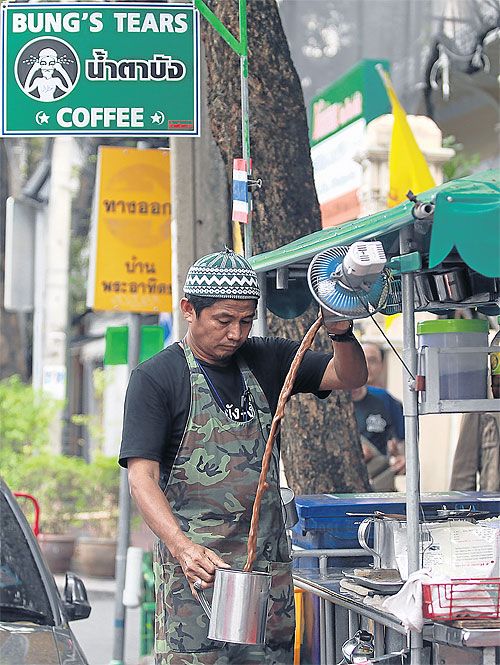