More+
Where are we and what's next?
Learning
Advanced news

Where are we and what's next?

Here's a quick look at how the protest situation stood this morning and coverage of the day's events as they unfold. 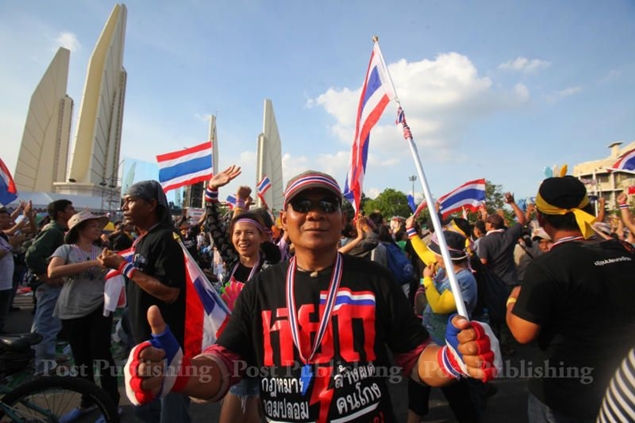 Where are they going today? We'll soon find out. PANUMAS SANGUANWONG

The Democrats have had the meeting I mentioned earlier in the day and here, from our online reporters, is a brief summary of what they told the press afterwards:

The Democrats will launch a campaign against the government on Friday after the opposition party outlined its decision to join the protests to oust Prime Minister Yingluck Shinawatra and end the influence of her brother Thaksin.

Party leader Abhisit Vejjajiva said after a party meeting that the Democrats will send members to the rallies and run parallel campaigns to other groups in an attempt to wipe out the Thaksin regime.

The strategy was mapped out in the meeting held shortly after MPs voted in the no-confidence debate against Prime Minister Yingluck Shinawatra and Interior Minister Charupong Ruangsuwan on the last day of parliament which will be in recess from Friday. The two easily won the vote in the House of Representatives through the overwhelming number of Pheu Thai members and the coalition parties.

"They won the vote in parliament. But they cannot escape responsibility for their attempt to whitewash wrongdoers which is unacceptable to the public,'' Mr Abhisit told a press conference, referring to the controversial bill to provide a blanket amnesty.

He dismissed speculation that Democrat MPs would resign to fight the government on the streets. 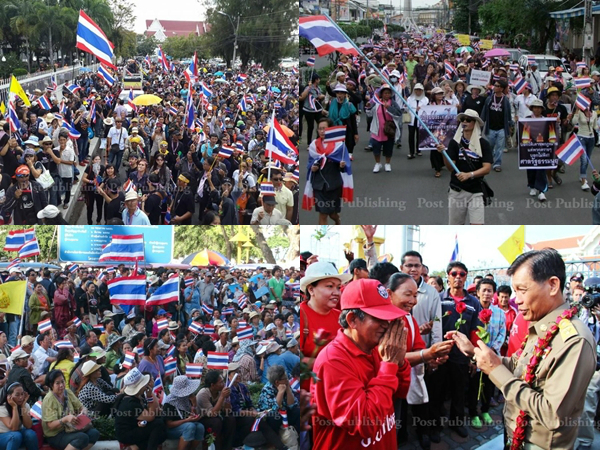 Once again there were many protests upcountry, but few received much coverage here in Bangkok. Southern protesters were quite active, but there were protests in many provinces outside the region, not all of them anti-government and, where the two sides were on the streets at the same time, some clashes did break out. The most serious was in Patum Thai were three anti-government protesters were reportedly hurt, one seriously. The photo above shows four of today's upcountry rallies. From upper left clockwise they are anti-government rallies in Nakhon Ratchasima, Buriram, Prachuab Khiri Kan and a red-shirt rally in Patum Thani. 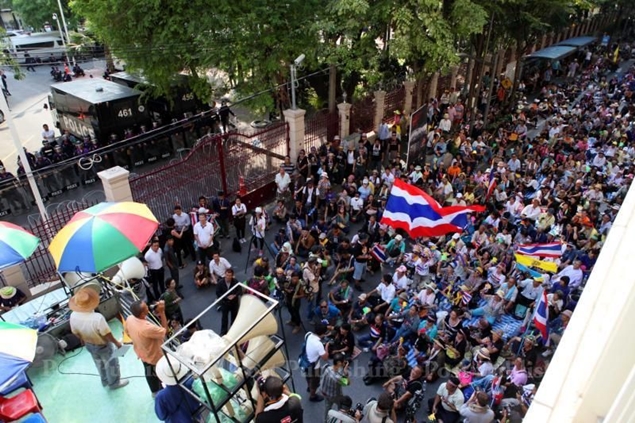 A crowd stands outside the well-guarded national police headquarters. Protesters didn't get in, but someone did cut the power supply. NATTAPOL LOWAKIT

What's going on? Pol Maj Gen Piya Uthayo, spokesman for Centre for the Administration of Peace and Order (CAPO) announced a short time ago that protesters at the national police headquarters had cut off power there. Then, he went a step further and said power was also out at the nearby Police hospital creating serious difficulties for patients there. Journalists quickly checked with hospital officials who denied that was the case. Immediately, the CAPO spokesman started receiving non-stop criticism through the social media. But then more confusion occurred when reports came out the hospital was running on generator power and perhaps Pol Maj Gen Piya was correct after all. Conflicting reports are still coming in. Latest: It's confirmed -- at least by our Post Today news team -- that the power was not cut to the Police Hospital.

There will be no House dissolution. Prime Minister Yingluck Shinawatra has just gone on national television to say her government can and will govern. Government services may be somewhat curtailed because of the demonstrations at state agencies but she is confident civil servants will do their best no matter what their political beliefs are. She appealed to the protesters to halt their actions against the state. She rejected rally leader Suthep Thuagsuban's call for a people's assembly, saying it was not possible under the current constitution, but she did welcome talks to try to heal some of the divisions between the opposing sides. 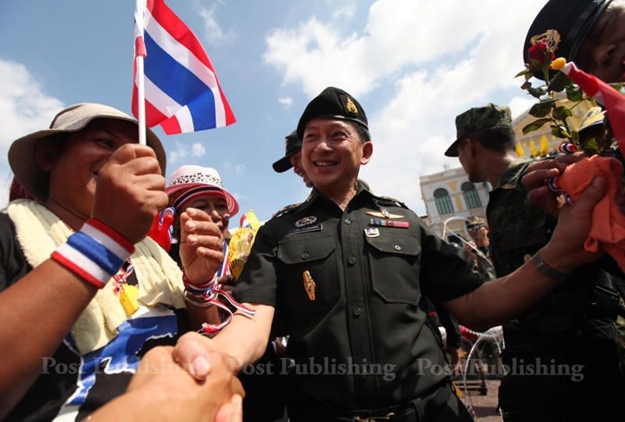 Flowers accepted, but no whistle-blowing at the Ministry of Defence. SEKSAN ROJAMETAKUL

The protest groups from Ratchadamnoen have reached their two targeted ministries. Military commanders at the Ministry of Defence were happy to receive the roses offered to them, but they politely and understandably declined to blow the whistles rally leaders try to give them. That would have been seen by some as a sign of support for the anti-government protests. The rally leaders did not pressure the commanders in any way. 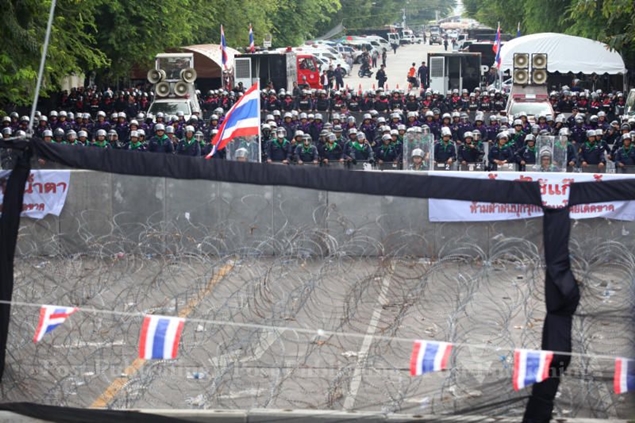 The Education Minstry is not an easy place to enter these days. PANUMAS SANGUANWONG

At the Ministry of Education, the reception was quite different. Being in a highly sensitive area near Government House and near the Ratchadamneon protest site, it is heavily defended and access is quite difficult. As of a few minutes ago, no ministry officials had come out to meet the rally leaders who vowed to stay until they do.

Latest: Reports have just come in that a third march, this one to national police headquarters, has begun.

This could be interesting. Our online reporters say Democrat Party leader Abhisit Vejjajiva will chair an urgent meeting of his party's executive committee and MPs this afternoon.

It is thought the meeting will discuss what the party should do in light of ongoing political protests.

Some MPs have reportedly proposed that Democrat Party MPs resign en masse to join street protests against the so-called 'Thaksin regime', led by former Democrat MP Suthep Thaugsuban. But others within party ranks disagree, claiming that a mass resignation would actually put the current government in a more advantageous position.

Boonyod Sukthinthai, a party list MP, said he expected the party to argue over how to address the situation, particularly over the issue of whether MPs should resign.

Protesters at Ratchadamnoen are leaving for two sites, the nearby Education Ministry and the Defence Ministry. Protest leaders tell the protesters to get their "weapons" (whistles) ready. Meanwhile, it sounds like it is going to be a day of rest for the group at the Government Complex at Chaengwattana. 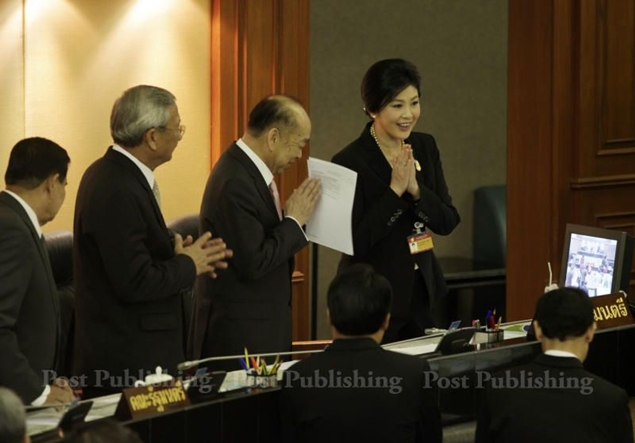 As expected Prime Minister Yingluck Shinawatra has easily survived the Democrat's no-confidence motion in parliament with 297 MPs  voting in her favour and 134 against. Interior Minister Jarupong Ruangsuwan did almost as well, keeping his position by a margin of 296 - 135. With the no-confidence vote out of the way, the Prime Minister is free to dissolve parliament, but she has insisted she will not do that.

It is anyone's guess what will happen to day. Before we start following today's events, let's look at where we are now with this story from this morning's Bangkok Post.

Invasions spread as govt digs in 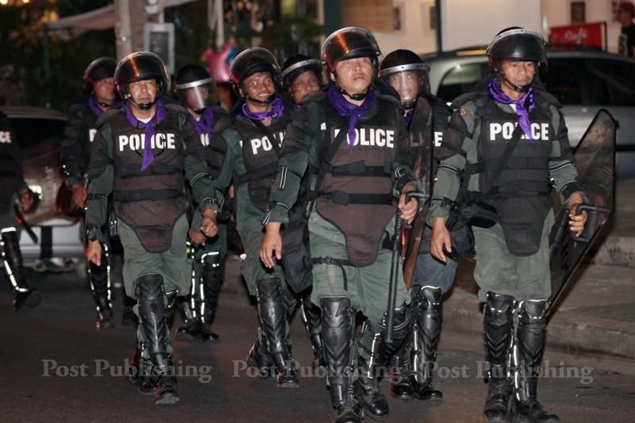 Police are still avoiding confrontation with the protesters. Here a group of riot police leave the Finance Ministry area under pressure from protesters. PATTARACHAI PRECHAPANICH

It is unclear, however, how the deadlock will end since both sides seem to have their backs to the wall.

The struggle between the Yingluck Shinawatra administration and anti-government protesters led by ex-Democrat MP Suthep Thaugsuban will likely take some time as both sides accuse each other of "illegitimacy".

Mr Suthep insists the Yingluck government is unlawful since it rejected the Constitution Court's ruling on the charter amendment draft. 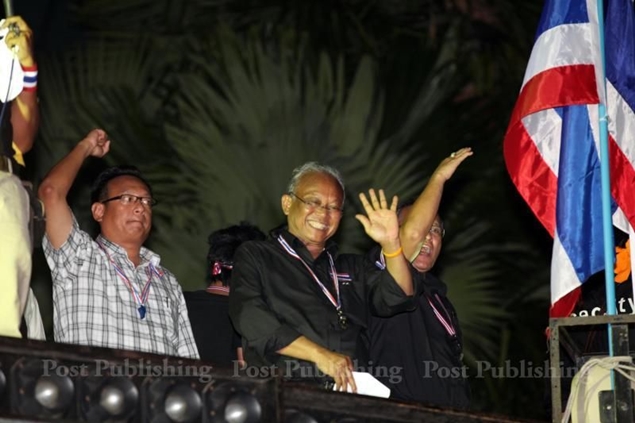 The government says Mr Suthep's decision to seize state offices has breached the peace and is akin to overthrowing democracy.

Both sides have accused each other of treason. As a result, the confrontation seems to have turned into a stand-off because whoever loses could face serious criminal charges.

Ms Yingluck earlier insisted she will not step down or dissolve the House of Representatives.

"I don't understand. There is no 'Thaksin regime', only democracy," Ms Yingluck said yesterday. With the reference to the "Thaksin regime", Ms Yingluck was responding to Mr Suthep and anti-government protesters' allegations about the influence of ousted premier Thaksin Shinawatra over her government.

She called on protesters to bring their demands to the negotiating table.

The government is making an all-out effort to avoid any violence. The government's ally – the red-shirt United Front for Democracy against Dictatorship – is limiting its moves to avoid confrontation.

"The MPs have been told to mobilise red shirts to help, otherwise all our efforts will go to waste.

"The power must be maintained or the Shinawatra family can't stay in this country."

The source said the Pheu Thai Party and the government are confident they can stay in power because the protest groups are "still doing nothing", despite the mass mobilisation of demonstrators last Sunday.

The large crowd on Ratchadamnoen Avenue on Sunday forced the protest leaders to escalate their moves.

Witthaya Kaewparadai, former Democrat MP for Nakhon Si Thammarat, said it was necessary for protest leaders to intensify the rally.

He said people were frustrated that the government, despite losing its legitimacy, refused to bow to the pressure.

"We realise that the fight will be protracted and we haven't thought about it ending. Thaksin will fight as hard as he can too because his entire family is at stake," Mr Witthaya said.

Mr Suthep insisted he would not negotiate with the government, adding that if his deadline to topple the government by the end of this month could not be met, it would be extended.

Attention is likely to shift to the National Anti-Corruption Commission, which is wrapping up alleged corruption cases against Ms Yingluck and the government regarding the 350-billion-baht water management and the rice-pledging schemes. 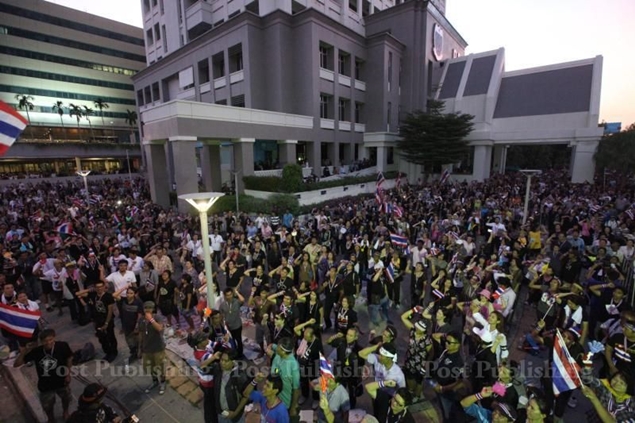 The largest group of protest marchers accompanied Suthep Thuagsuban to the the Government Complex in Chaengwattana where they set up a new rally site. WEERAWONG WONGPREEDEE

Civil servants waved national flags and cheered to show their support for the protest, which went smoothly without any clashes between demonstrators and security officers.

They also gained support from the State Enterprises Workers' Relation Confederation, that announced yesterday that members of 43 labour unions have agreed to take leave today and tomorrow to join the anti-government protests.

The State Railway of Thailand and the Bangkok Mass Transit Authority's labour unions refused to join the campaign.