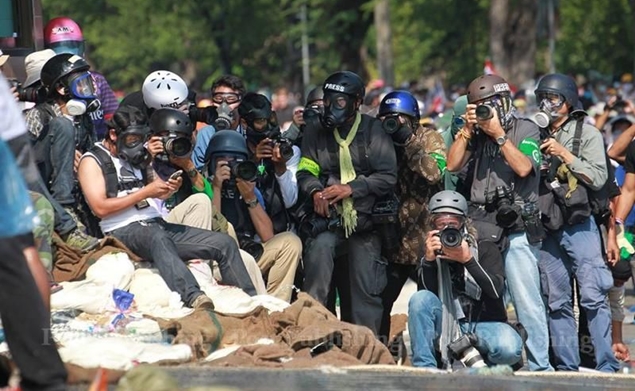 Nowadays, photographers are often better prepared than protesters for tear gas, but they still often end up among the injured.

A life lived in camera

When the water cannon fires and the tear gas shoots overhead, one group is not running away – although we are keen not to break our equipment. Press photographers are among those rare people – like emergency service personnel – who run towards danger, whether it's a violent political demonstration, massive flood or a crime scene.

We also get close access to the rich and famous, from politicians and celebrities to criminals and sports stars. It's a perspective most people only see in the papers, through our photos. 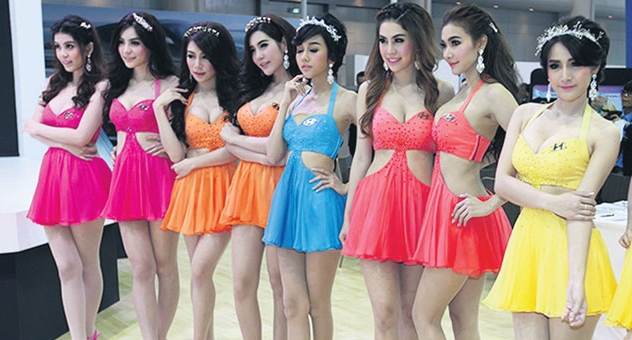 One of the perks of the job, taking photos of pretties at an autoshow.

But getting the picture is not always easy, and in some cases it is downright dangerous.

He proved this in dramatic fashion earlier this year when the two of us went to Prachin Buri for a week to cover the floods that had washed over the province. While I tried to stay as dry as possible during the trip, I watched on with awe and surprise as he got into ridiculous positions, showing himself to be one of the most dedicated photographers out there. What was he doing diving into the floodwaters? He simply wanted to capture an angle that no one else could match. 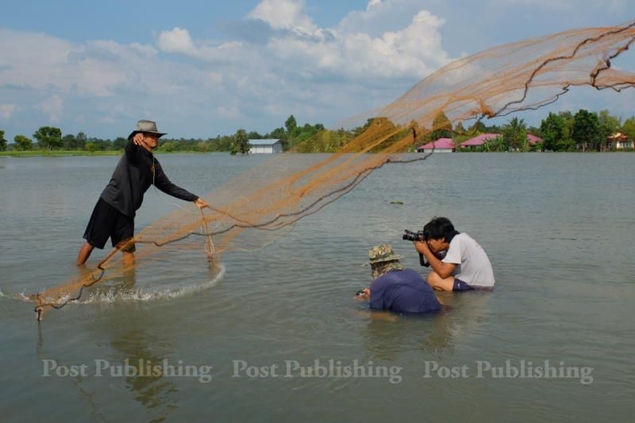 Thanks to a waterproof case and a GoPro camera, he was able to do so. The whole trip was like this: He jumped in and out of the car, running towards the floodwaters.

Once, he even asked a fisherman to toss a net over him for a picture while he was in the water. Usually fish-eye lens means something else entirely.

In some areas, he was neck-deep in the water, and almost drowned trying to access a temple deep inside the woods. He also got leeches all over his legs from walking through rice fields, picking up skin rashes and itches. The camera and lenses were the only things he made sure to keep out of the water the whole time.

For more than a year we have been using a camera mounted on a remote-controlled helicopter to hover above newsworthy events. Most recently you will have seen these images from protest sites, it's a novel method for showing the scale of the crowds. The trend caught on – I counted seven UAVs on Nov 24 alone at the Democracy Monument gathering. 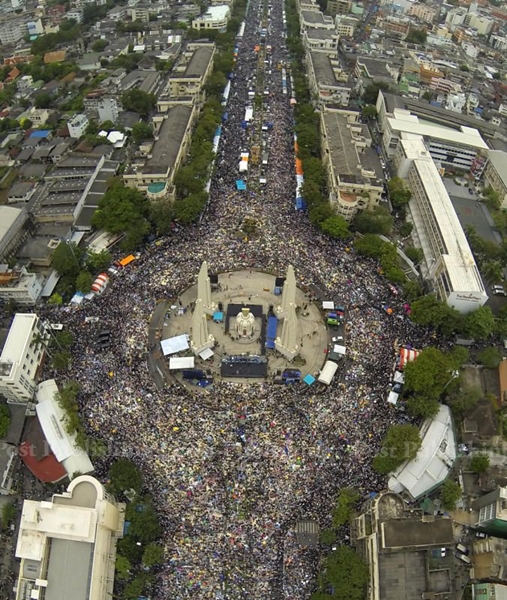 Normally, UAVs are used for such missions as mapping landslides, tracking receding glaciers to getting an image of other hard-to-reach places. But the Bangkok Post first used it for news coverage more than a year ago.

We tried it in a variety of situations, such as capturing the light decorations for the Queen's birthday and when the futsal stadium was under construction. These photos made quite a splash on the Bangkok Post front page. However, the recipe for success wasn't completely worked out until the King's birthday celebrations last year in Bangkok. 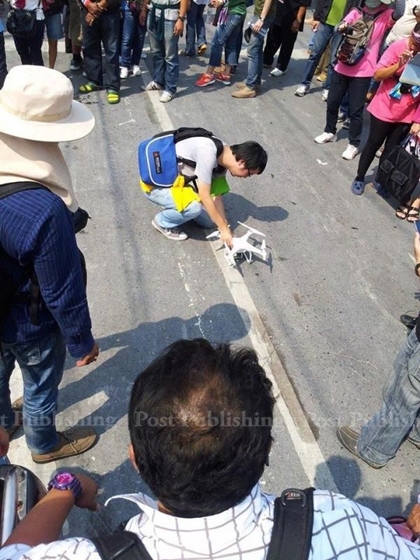 The team stayed in a hotel near Ananta Samakhom Throne Hall, waking at 5am to spread out and cover the area. I was the one remotely controlling the helicopter, and I was afraid of attracting the attention of the police – a stranger walking around with a UAV not far from the King had to look suspicious.

It was 8.30am when I got the best shot, and it went viral on the newspaper's Facebook page. A former photo editor once said ''the best photo is the one that needs no caption'', and I experienced this myself with this photo.

The political protests of the past few weeks have not only seen the UAVs in action, but the more down-to-earth methods of news-gathering where photographers can be in the line of fire.

A few weeks ago photographers were injured when protesters and police clashed outside Government House. The Bangkok Post's Patipat Janthong got a skin rash from the tear gas that was dyed purple, while another snapper was hit in the left ear by a rubber bullet. Rumours someone had been shot and killed sparked dozens of phone calls checking the whereabouts of our photographers. 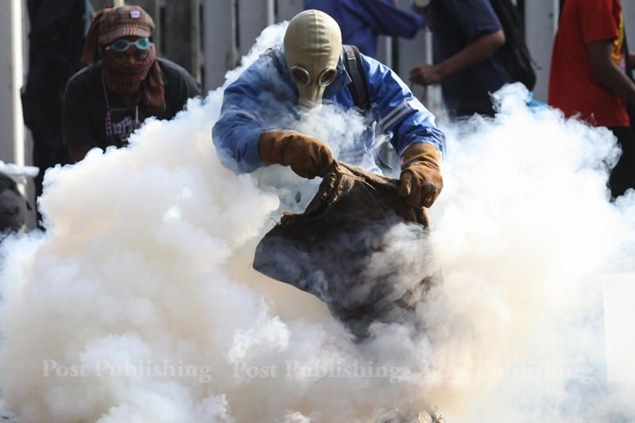 Even after suffering a skin rash in previous tear gas attack, Patipat Janthong was right back at the front lines in Din Daeng for more of the same. PATIPAT JANTHONG

Thiti Wannamontha, who was assigned to follow the ongoing anti-government protest, said he was careful to remember to wear his protective gear.

''I was hit by tear gas during earlier protests this year and two years ago when I wasn't well equipped and I had to get treatment. I came back to the office empty-handed. This time the equipment helped me carry out my assignment safely.''

Last month, he took a photo of a protester trying to flee after police fired tear gas into a rubbish truck at the Metropolitan Police Bureau headquarters. ''The smoke was very thick and I knew I must duck. Afraid of danger? No. I'm more afraid of not getting good photos.'' 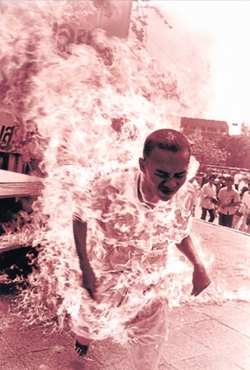 Another dangerous, recurring fact of life for a photographer is fire, and 30 years ago Kosol Nakachol was close to the action during a demonstration at Ramkhamhaeng University. For Kosol the day began like any other Sunday, until the Bangkok Post's photo editor told him a student was threatening to set himself alight unless the government quit. It was a time of widespread protests against the government and the student had made the threat two days earlier. No one expected the young man to go through with it – and TV crews on hand had decided to have lunch when he did.

Out of the blue, the student declared ''I am a man of my word,'' and lit himself on fire.

Covered with flames, he ran toward Kosol, who stood his ground and snapped a photo that would a year later earn him an Issara award, the Thai equivalent of a Pulitzer, for ''photo of the year''.

What he didn't realise was that his fearless action was captured by a fellow photographer and that was what made the front page the next morning. ''I had no idea what happened or whether he was running toward me or not,'' Kosol recalled. ''I just wanted to take the shot. In the front page photo, you can see me making sure that the film wasn't jammed.'' 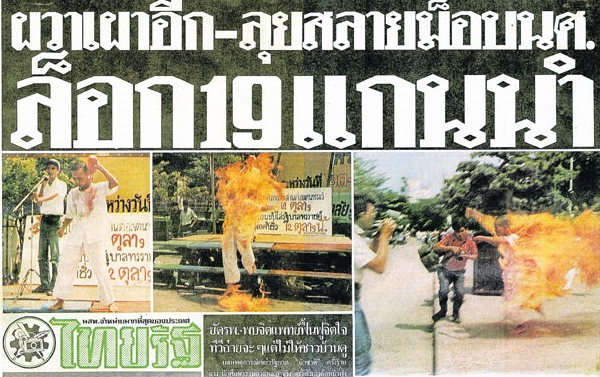 The front of page to the Thai Rath the next day. That's Kosol in the right photo, checking his camera as the student approaches him.

During the 2010 red shirt protests, those who went out were well equipped and prepared for danger, said photo editor Sarot Meksophawannakul.

''We equipped ourselves with everything – helmets, bulletproof vests and gas masks – but even with all that, we really didn't feel safe at all.''

Photographers often had to brave bullets while covering the protests in 2010.

The day the military made its final push to retake the Silom, Lumpini and Ratchaprasong areas held by the protesters was especially tense.

''All I heard was gunshots and I knew I had to duck if I wanted to stay alive.''

Sarot was one of the photographers who followed the troops' advance.

Why did he put his life on the line? ''We capture history. That's why we have to get the best possible photo to tell the story. Otherwise, what are we doing if we are not telling the truth?''

Dozens of photographers accepted the risk in the 2010 final confrontation, and not all of them survived. Italian photographer Fabio Polenghi was killed by a high-velocity .223 calibre bullet.

''Looking back, it was quite an experience,'' Sarot said. ''It's not often that you will find the crowded Silom area to be deserted with just a cat walking down the street. 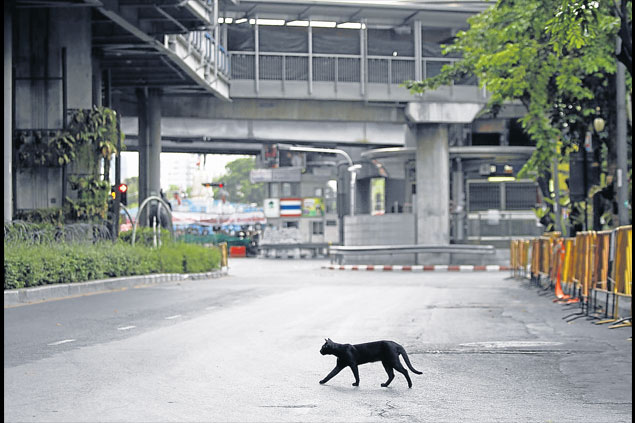 Sarot Meksophawannakul's photo of a lone black cat, the only creature daring to venture into Sala Daeng intersection in the 2010 unrest.

''Everything you usually see in a movie – gunshots, soldiers and rebels – it was all there.'' Sarot received the company's employee of the year award, but was it worth risking his life? ''It is not a question of being worth it. I just do my job.''