Since no one knows how this shutdown will play out, our only option is to prepare ourselves to have the best damn shutdown experience the world has ever seen. 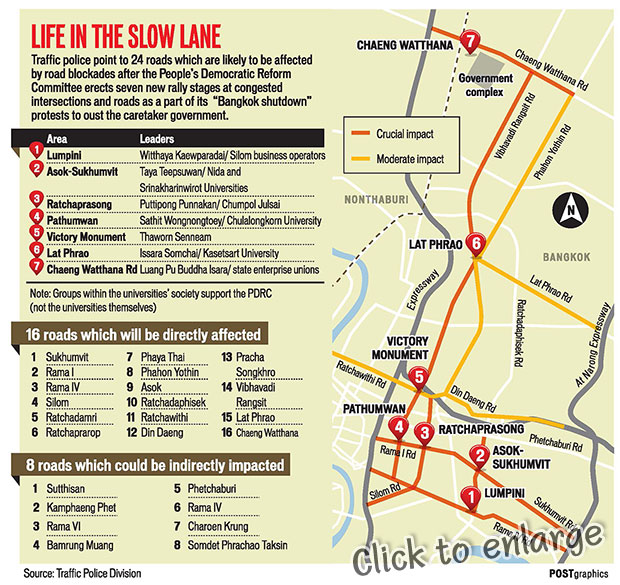 A guide to surviving the shutdown

It's almost here, the moment no one has been waiting for... Bangkok is on its way to a shutdown on Monday (January 13)! In the most exciting thing that has happened since the day the BTS broke down last month, we can thank the anti-government People's Democratic Reform Committee (PDRC) for continuing to bring festive cheer to the capital.

The PDRC says they will occupy 20 major areas in Bangkok in an effort to paralyse the city and prevent government officials from going to work until the caretaker administration quits. When (or if) that happens, they will set up a "people's council" to reform the whole political system because they apparently have the magic formula that has eluded the greatest thinkers from the beginning of time.

But since no one knows how this shutdown will play out, or how long it will be in effect, our only option as innocent bystanders is to prepare ourselves to have the best damn shutdown experience the world has ever seen, so that we can hopefully tell our grandkids about our heroic actions one day.

The first thing you should do to get ready for the shutdown is to head to your nearest 7-Eleven. You'll need to stock up on important items in case things get really bad. Get water, booze, toilet paper, and all the Mama noodles on the shelves you can carry because there's nothing worse than being stuck at home and going through MSG withdrawals.

Pay for your items and kiss your 7-Eleven cashier goodbye, because who knows when you'll meet again.

Next, head to a shopping mall and buy at least one month's worth of underwear. There's a chance that your maid won't be able to make it to your house because of all the traffic congestion that will occur when the shutdown begins. The surplus undies will come in handy since you don't know how to do your own laundry, plus your maid will really appreciate the extra work you've created for her when the shutdown ends.

While you're at the mall, you might want to stop and pose for some pictures too. That doesn't have anything to do with preparing for the shutdown, but we just thought it's something you would enjoy.

Spend the rest of the weekend downloading every show you can think of. You don't want to go into this shutdown with nothing to watch. Also water your plants, sharpen all your pencils, and get all the karaoke singing out of your system. Anything could happen.

Now that you've taken care of your shutdown survival essentials, it's time to decide what you want to do when the actual city cripplage begins on Monday.

If you choose to use this debacle to stay home from work, eat all the chilli paste from the Mama packs you bought earlier. This will guarantee that you will have a valid excuse to stay home and reconnect with your toilet.

But if no shutdown will keep you from your job, make sure you learn how to use a public bus as many roads will be closed. It may be very difficult to spot such a vehicle at first, because to the untrained eye you may have thought you were seeing Godzilla charge through the streets. But identification will become easier over time. Just look for the contraption that doesn't pull over anywhere near a bus stop.

When you get to work five hours later, terrified and shivering from the deathly bus ride, do what you always do first when you get to the office  log on to Facebook.

Rifle through all the political status updates and protest selfies on your newsfeed, but be careful about posting your own remarks if you're not the confrontational type. This shutdown is going to bring out all the brutal opinions from your Facebook friends, and they will fire back their comments instead of just mindlessly clicking "like".

Once you're done Facebooking, go to a travel website. Make sure not to click on any of those flashing ads because it could harm your computer. Instead, think of the place you've always wanted to visit. Do some research on the best way to get there because depending on what course the shutdown takes, it's not too late to book a one-way ticket out of this nutso city.