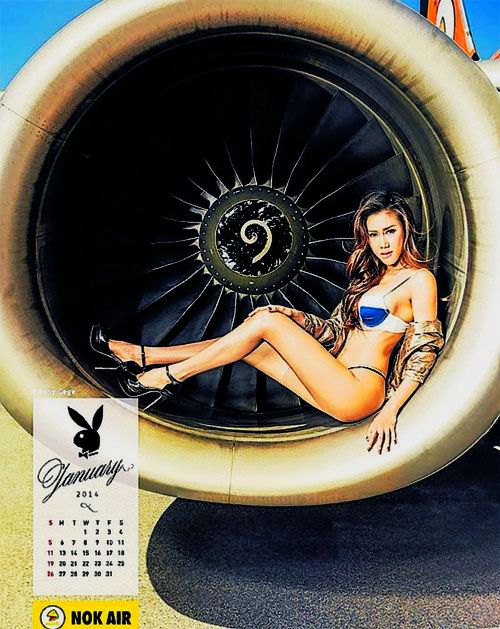 Ready for take-off: A ‘Playboy’ model poses with the jet engine of Nok Air’s B737-800. Nok Air CEO Patee Sarasin insists that the airline’s calendar promotes ‘good taste, artistic value and the concept of nothing is too much’.

Nok Air's 2014 calendar is a collaboration with the Thai unit of the US-based Playboy men's magazine. It features 12 models clad in bunny swimsuits with Nok Air's yellow corporate colour, shot with the airline's Boeing 737-800 jetliners in the background at Bangkok's Don Mueang airport.

It cost Nok Air just a little over 1 million baht to produce the 2014 calendar, with Playboy Thailand providing the shooting services and bearing some of the other costs. A total of 5,000 copies were produced this year, up from 3,000 last year. The calendars are not for sale, as 3,000 will either be given to winners of Nok Air's Facebook and Instagram contests or distributed to the airline's clients as corporate gifts. The remaining 2,000 copies will be allocated to Playboy Thailand's readers and clientele. Nok Air has vowed to keep producing sexy calendars in future years, insisting it was now a Nok Air tradition.

Unpaid farmers from four provinces in the Central Plains region, Sing Buri, Chai Nat, Lop Buri and Saraburi, yesterday began blocking the Asian Highway in Sing Buri for three days to demand overdue payments under the government's rice-pledging scheme. Farmers have been waiting for at least five months since they sold off their paddy to the government. If the government continues to postpone the payments, the farmers say they will continue to block the road. Motorists travelling to the north stuck in traffic for hours were advised to use different roads ( No.309 Ang Thong-Sing Buri, and those travelling to Bangkok to take road No.311 Sing Buri-Lop Buri).

In Phichit, about 3,000 farmers gathered in front of the Bank for Agriculture and Agricultural Co-operatives (BAAC) in Muang district. They set up a stage there and took turns criticising the government's management of the scheme. The farmers threatened to drive their tractors and trucks to Bangkok in three days' time if the government continues to ignore their plight. Nakhon Ratchasima farmers also want the government to pay interest incurred during the payment delays as they did not have money to pay farming debts. Farmers are willing to wait for government payments even if they are delayed because government prices are 50% higher than market prices.

Thailand will allow initial public offerings (IPOs) of foreign companies for the first time as Asia's 11th-largest equity market seeks to compete with Hong Kong and Singapore as a regional hub for stock listings. Several Chinese companies have already expressed interest in selling shares in Thailand. Thai investors are said to be in desperate need for new stocks and investment alternatives for their savings. Growing interest in stocks in Thailand led people to pour $2.7 billion into the market last year.

While Thailand's US$341 billion equity market is about a tenth the size of Hong Kong's, Thailand wants to compete with Hong Kong and Singapore to become one of Asia's funding centres. Thailand's stock exchange SET is valued at 14 times reported earnings, while the Hong Kong index trades at 10 times and Singapore has a multiple of about 13. Hong Kong's exchange, long a listing destination for Chinese companies, has broadened its reach in recent years to include Russian companies and Singapore has lured companies from China, Malaysia and the Philippines.

Thai companies, property funds and infrastructure funds raised about $5.8 billion through IPOs last year, the most since Bloomberg began compiling the data in 1993. Thailand will require foreign companies seeking Bangkok listings to have at least two Thai citizens on their boards. Financial statements must be endorsed by auditors who are certified by the local regulator. The regulator will also allow trading of depository receipts linked to large foreign companies such as Apple and Google.

Policy makers will also promote Thailand as a funding destination for nearby countries with less-developed capital markets such as Laos, Myanmar and Cambodia. Thailand is in talks with Myanmar's finance ministry on the sale of baht-denominated bonds to Thai investors.

Rice farmers from four central provinces block the Asian Highway in Ban Mo of Sing Buri’s Phrom Buri district, in a protest aimed at pressuring the government to speed up paying overdue funds for rice pledged under the government’s scheme. PANUMAS SANGUANWONG 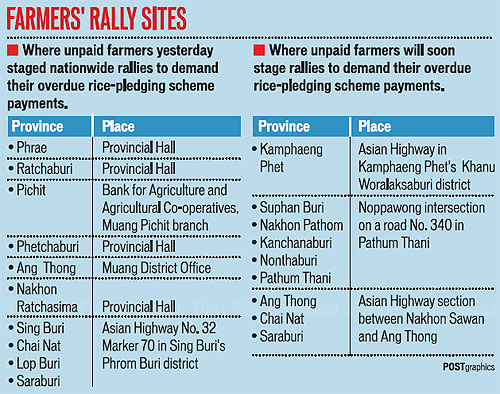