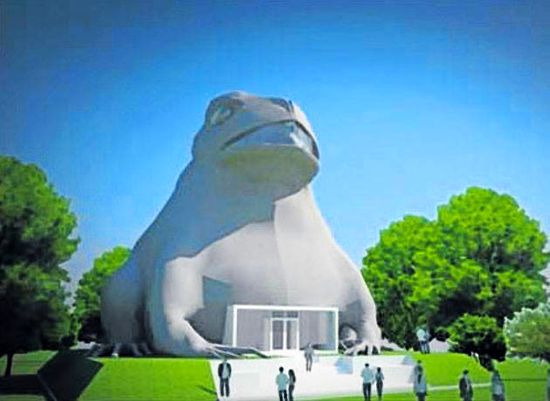 Yasothon's new toad museum will be built in the shape of a giant toad.

Called Phaya Khan Khak, the first museum for toads will be opened this year and located on the bank of the Thuan River where it passes the Phaya Thaen Public Park in Yasothon.

The museum will be built in the shape of sitting toad. The giant four-storey creature will be 19m in height with a total usage space of 835m².

Exhibits in the museum will be managed by the National Science Museum (NSM). According to NSM acting director Sakorn Chanapaithoon, new presentation techniques and technology will be applied to make the museum lively, fun and educational.

The first floor will display a history of the province and house a 4D theatre showing movies about a mystic toad. The second floor will educate visitors on bang fai rockets, including history, legends and scientific content. There will also be models of bang fai rockets and multimedia presentations.

The third floor will show the lifestyle of people in the province. The fourth floor will have specimens of toads and information about 500 types of toads around the world. There will also be all the types of real toads found in Thailand.

Sakorn said the museum would be a tourist attraction and a learning centre in the province.

In addition, Yasothon has planned for the construction of an exhibition hall in the shape of a mystical Serpent King (phaya nak) next to the toad museum. The hall will be 90m long and will have a total usage space of 600m². The head of the building will be the head of phaya nak, which will be 27m in height.

The exhibition will feature five zones including two focused on the legend of the Naga and Northeastern culture.

Both buildings are expected to open within the year.

A new dog park will be located under the expressway at Watcharapol intersection and will have about 4 rai.

The BMA has invested 47 million baht for the project, according to BMA's environmental department deputy director Somchai Chatsakulpen, who said the aim is to have a green space for city people to go out or to exercise with their dogs.

The park will be zoned. There will be an area where owners can let their dogs roam freely and another area in wish owners must leash their pets. Veterinarians will be on standby in the park.