Silos across country filled with millions of tonnes of rice with govt only buyer & slow to sell. As cost of scheme soars, delayed payments to farmers & protests nationwide. 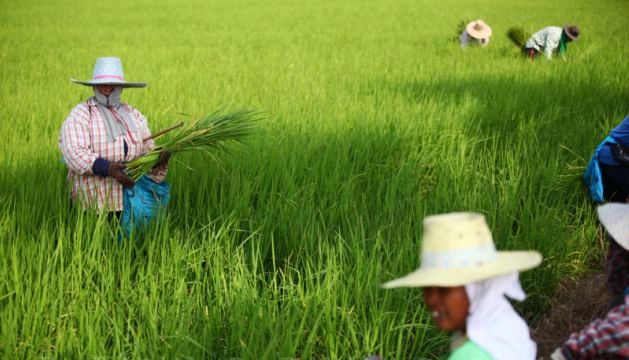 In the two years since the launch of the government's rice pledging policy, where do we stand now? Silos across the country are filled to the brim with millions of tonnes of grain, as the government has become the sole buyer of rice in the country but been slow to sell. Farmers nationwide are protesting about delayed payments as the cost of the scheme soars. And taxpayers are facing hundreds of billions of baht in losses, with the bill rising with each passing day due to the fact that the programme is a bald-faced subsidy paying farmers up to 40% above the market price.

The latest move by the Finance Ministry was to call for a bridging loan auction of commercial and state-owned banks last week in an attempt to get a loan to repay 1 million angry rice farmers.

However the auction for the first 20 billion-baht bridging loan was called off, as only a few banks joined in the bidding because most of them were worried about whether the caretaker government has the mandate to borrow. The government now owes the farmers 130 billion baht and the money from rice stock sales is insufficient to make the payments.

The caretaker government has tried to find ways to pay the debts owed to the farmers as it cannot afford to lose their votes.

If this were an enterprise, the word "bankruptcy" would not be sufficient to explain the massive losses and hefty damage caused to the country and its people. More importantly, corruption allegations are tarnishing the country as a whole.

The cost of this failure is enormous. In the past two years, the government has borrowed a total of 700 billion baht, equal to a two-year government investment budget. Even worse, the borrowing and debts continue to mount. And those bearing the brunt are the taxpayers.

But that is only the financial loss. What else have we lost along the way? And what costs are we about to pay if this much-denounced scheme carries on?

Many renowned economists, academics and public figures have slammed the subsidy and urged the government to end it. However, the Yingluck Shinawatra government has played deaf and continued with the scheme.

What will happen if the government continues the scheme?

[Read the rest of the article here ]

A way out of the imbroglio... 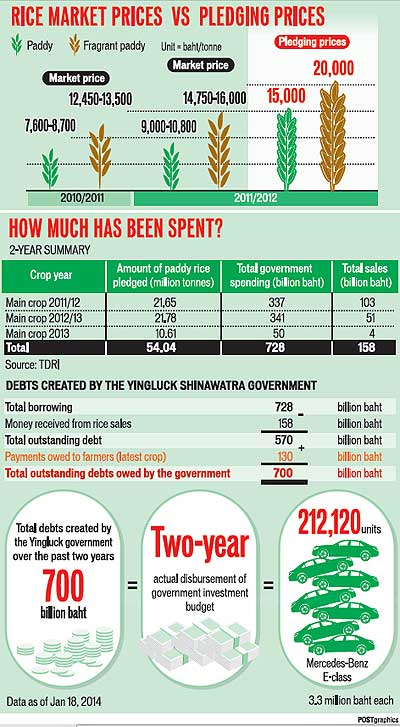