Sunday negotiations with Luang Pu Buddha Issara did take place but the monk is not ready to move his group anywhere, he said. Meanwhile the CMPO director has made more crackdown threats. 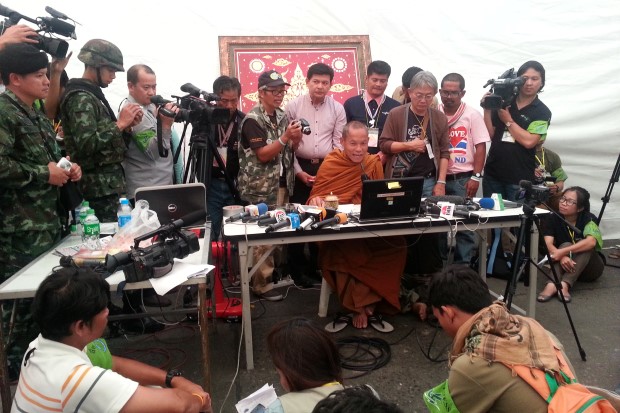 We'll have updates as events occur

Luang Pu stays put as more crackdown threats are made

The long-awaited negotiations between Luang Pu Buddha Issara and police did take place as scheduled today, but it was not face-to-face. Instead it was a video-conference with Luang Pu talking to Naret Nanthachot, commissioner of Provincial Police Region 1.

Pol Lt Gen asked the monk to open the roads in the area of his Chaeng Wattana rally site, saying he was speaking on behalf of the many members of the public who had complained of the inconvenience caused by the road closures.

Luang Pu, however, said that his site had been hit by almost nightly incidences of violence and he demanded that any cooperation must come in return for assurances of tight security.

More talks will follow, but there was no talk of the rally site closing down.

That talk came instead from Centre for Maintaining Peace and Order (CMPO) director Chalerm Yubamrung who said the police will this week retake five rally sites occupied by People's Democratic Reform Committee (PDRC) protesters, including the Chaeng Wattana site.

He said another area to be cleared is the vicinity of Government House including Orathai bridge, Chamaimaruchet bridge and Suan Miksakawan intersection where PDRC protesters have blocked officials from entering their offices.

The protesters at the Interior Ministry would also be asked to move out and the occupied area at the Energy Ministry must be retaken since the protesters had caused trouble for the people, he said.

Police forces would be used to retake these five spots. If met with resistance by protest guards, who are said to be armed, the police might have to use guns to protect themselves, Mr Chalerm said.

Includes information from our online reporters. 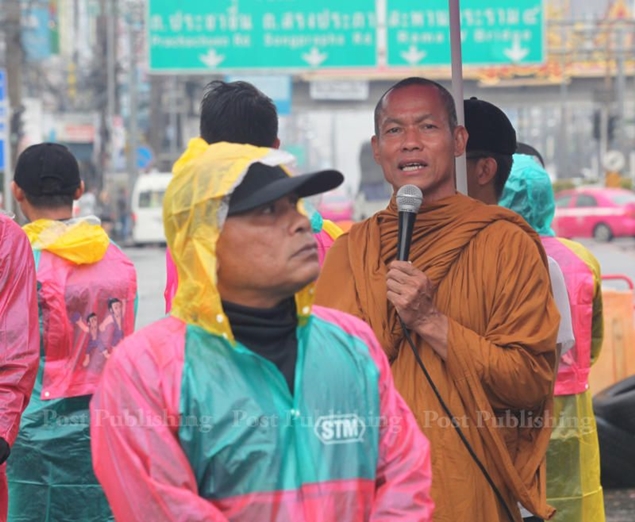 It's official. Any police action against Luang Pu Buddha Issara and his followers at Chaeng Wattana has been put off at least a day as negotiations have been scheduled for tomorrow afternoon. APICHIT JINAKUL

Here, from our online reporters, is the reason the police have stayed away from the Chaeng Wattana rally site today:

Luang Pu Buddha Issara, the leader of the protesters occupying the Government Complex on Chaeng Watthana Road, has agreed to hold talks with police on Sunday.

The decision prompted authorities to put on hold a plan to retake the state offices on Saturday, defusing a possible confrontation temporarily.

Addressing supporters on Saturday, the monk said he would hold discussions at 1pm Sunday with police about their plan to take back the site.

The Government Complex has been occupied for more than one month by supporters of the People's Democratic Reform Committee as part of its drive to oust the Yingluck Shinawatra government.

Luang Pu Buddha Issara suggested that the police representatives should not wear uniforms when they come for talks, as they might be charged with negligence for failing to arrest him since he is wanted under an arrest warrant.

But the police representatives must carry their identity cards, he added.

Foreign reporters waiting for the Chaeng Wattana police crackdown are getting bored. There are no policemen in sight and instead of a confrontation, the latest photos show police asleep back at their base. Civilian supporters who came to give police moral support during their operation are reportedly getting impatient. 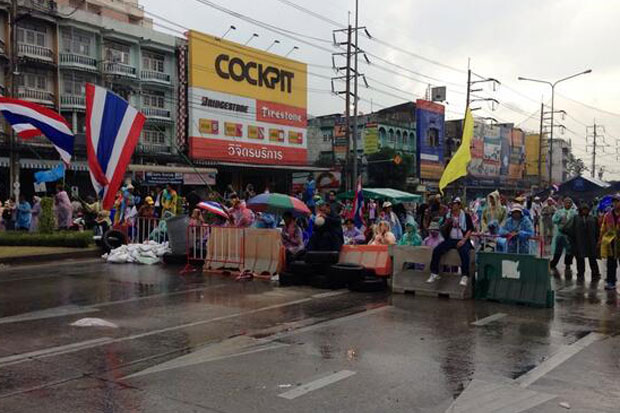 It's a rainy morning at Chaeng Wattana as these protesters wait the expected arrival of police. Post Today photo

Reporters at the Chaeng Wattana site say protesters are calmly waiting for the police who apparently have not yet started moving forward. One police officer said a negotiating team will try to talk to Luang Pu Buddha Issara first.

Meanwhile, back in the Ratchadamnoen area cleared by police yesterday morning, protesters are back in control. Police were seen negotiating with protest leaders to open certain roads and to allow cleaners in. There is now a big cleaning operation taking place. 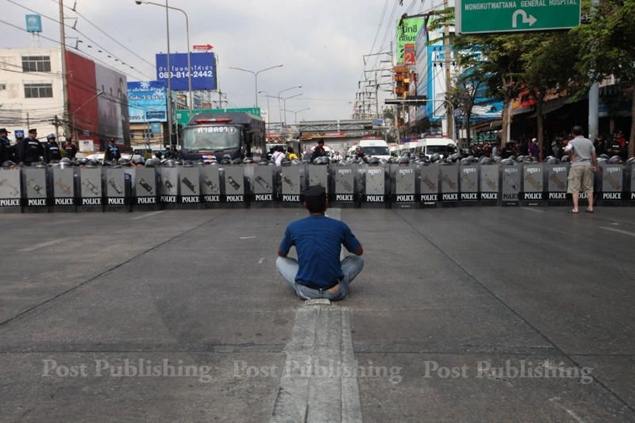 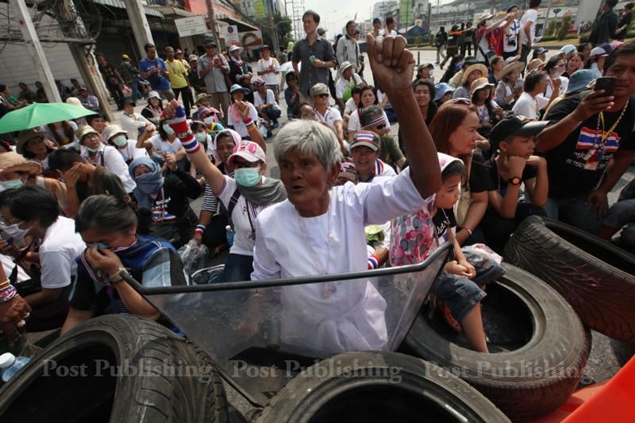 This determined grandmother will likely be at the front of the protesters defence line again today. PATTARACHAI PREECHAPANICH

A large contingent of police, eight companies or more, are at their base in the Chaeng Wattana area and are reportedly preparing once again to reclaim the People's Democratic Reform Committee (PDRC) rally site there.

Like yesterday, there is a large group of civilians cheering the police on, some holding signs like "Police, show some courage."

Yesterday, of course, the police armed with shields and batons, marched forward to within 50 metres of the rally site, near a line of protesters, some of whom were praying.

After a brief scuffle, the police abruptly retreated, leaving the rally site intact for another day.

Later, police officials, said this was only a show of force and that they had hoped to negotiate with rally leader Luang Pu Buddha Issara. They said the police would be back again today and they are.