Five were killed, 1 police oifficer and 4 civilians, as a large police force in support of negotiations to reclaim 5 Bangkok rally sites occupied by anti-government protesters was forced to halt operations because of serious violence at Phan Fah. (updated Wednesday)

Here is the Bangkok Post's Wednesday morning summary of what happened during yesterday's "clean-up" operation. Yesterday's "as-it-happened" report follows with many photos. 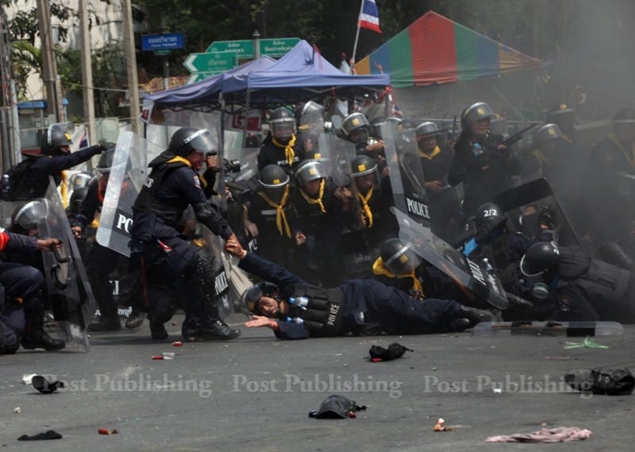 Stunned police react after a grenade landed on their position. Casualties could have been worse except for a heroic policeman who kicked the grenade to the side, losing his legs in the process. PATTARACHAI PREECHAPANICH

Note: Thai PBS has just reported that the death toll now stands at 5 with 66 injured.

Four people were killed and more than 60 others injured as clashes between police officers and protesters broke out on Ratchadamnoen Avenue yesterday morning.

The police were met with resistance as they attempted to reclaim the protest site at Phan Fah Bridge on Ratchadamnoen Klang Avenue. Three of the dead were civilians and the other a police officer. 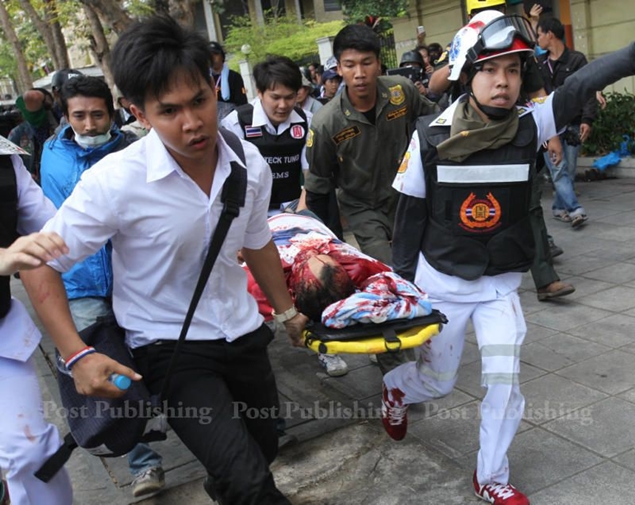 Two protest leaders and almost 200 demonstrators were arrested as police swooped on the two locations.

The demonstration in front of the Energy Ministry was led by the Energy Reform Network, while the Phan Fah protest was run by the Dhamma Army. Both groups are allies of the People’s Democratic Reform Committee (PDRC), the main anti-government movement which is staging the multi-site “Bangkok shutdown” campaign to oust the caretaker government of Yingluck Shinawatra.

The Centre for Maintaining Peace and Order (CMPO) previously announced it would reclaim the protest sites this week.

The operation started early in the morning when nine police companies arrived at the Energy Ministry protest site at 7am and asked about 200 protesters to leave the site. The demonstrators refused to leave and more than 140 of them were arrested. 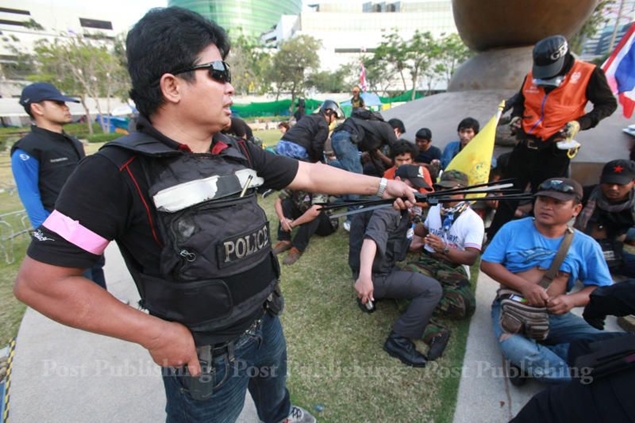 Many arrests were made at the Energy Ministry. PORNPROM STRABHAYA

“Later, the officers instructed us to leave the area. The protesters resisted the police’s order by sitting down on the road and praying,” Mr Samdin said.

Police continued to move in and began demolishing their tents and the rally site stage, he said. But the situation deteriorated when a large number of protesters attempted to obstruct the police operation, prompting officers to fire tear gas and rubber bullets at them. 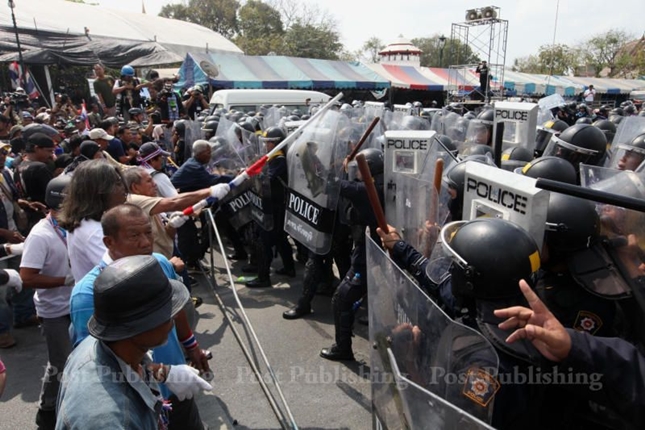 Some protesters resisted when police began demolishing their camp and stage. PATTARACHAI PREECHAPANICH

As the police advanced from Ratchadamnoen Klang to Ratchadamnoen Nok Avenue, they were targeted by bomb blasts and gunshots, prompting the officers to retreat and call off the dispersal operation.

Pol Maj Gen Yingyos, who led the operation, said the gunshots “came from every direction”. He said it was still unclear who launched the bomb and shooting attacks.

“We were hit by several bombs and I was busy rescuing my men,” he said.

The Erawan Centre reported that four people were killed and 64 people injured in the clash at Phan Fah Bridge. The victims were civilians Supoj Boonrung, 52, and Thanusak Rattanakot, 29, an unidentified man and police officer Pol Snr Sgt Maj Pianchai Parawat, 45.

The Royal Thai Police reported at least 20 police officers were taken to hospital after the clash.

Most of them suffered shrapnel wounds, while two of them sustained gunshot wounds.

Tuesday "as it happened" 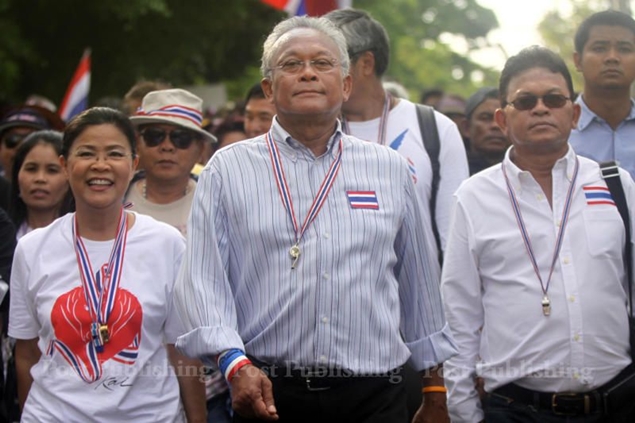 PDRC leader Suthep Thuagsuban was back on road to Government House this morning, leading a large group of reinforcements to resist any attempt by police to reclaim the area. SEKSAN ROJJANAMETAKUL 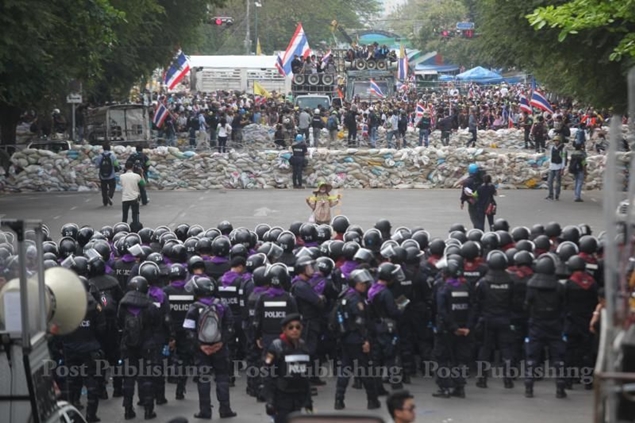 The scene in the Government House area late this morning. PATTANAPONG HIRUNARD 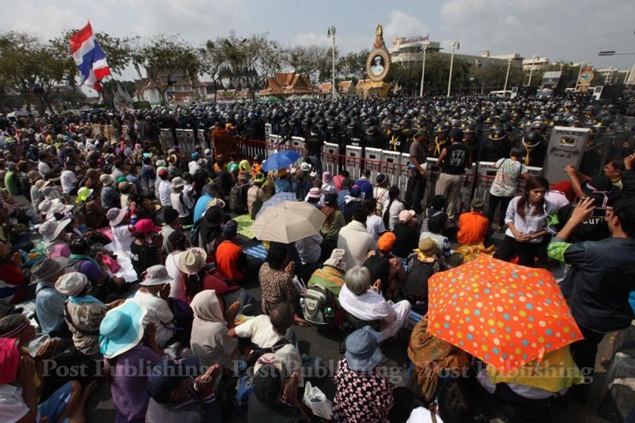 The police operation at Phan Fah began with officers moving slowly forward. There was pushing but little violence. PATTARACHAI PREECHAPANICH

The violence at Phan Fah has left four dead, at least one of them a policeman, and 64 injured according to the latest report.

The incident started near noon as a typical police operation with officers behind shields slowly moving towards and through protesters, many of whom were praying.

The police reached the protest camp and began going through it looking for weapons and tearing down tents. 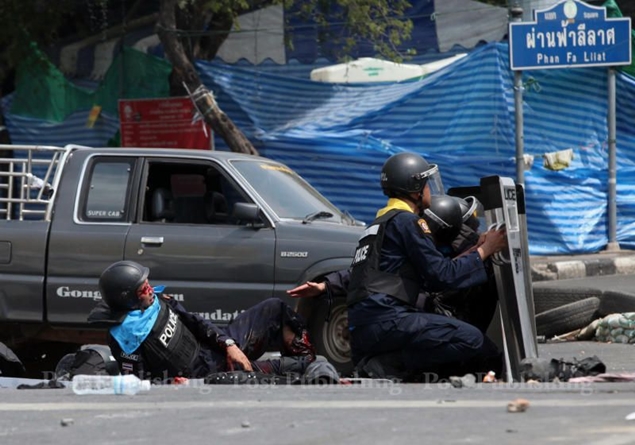 Four police were injured where their position was hit by a grenade. PATTARACHAI PREECHAPANICH

Then, once again, there was a sudden attack by unknown gunmen. Speculation is high that one of the attackers was the so called 'popcorn' gunman seen firing a gun through a corn sack at Laksi intersection on Feb 1, 2014.

This time police returned fire, but the gunmen were able to escape.

After the noon-time violence, police have now left the Phan Fah area.

Reports have just come in that the policeman who was shot in the head has now died. He was from Chonburi. The injure toll has risen to 44, according to the Erawan Medical Centre. (Correction: We know now that he survived. Another policeman was killed, shot in the upper chest.)

There are reports that a compromise agreement was being discussed before the violence broke out at Phan Faa. Protesters were to give up the area between Misakawan intersection and the Makawan bridge. In return, the police would not try to retake the rally site on Pitsanulok road next to Government House. Protest leaders however demanded that the police state this officially in a press conference and that that they promise not to arrest rally leaders. It is not clear if this is still under discussion.

The Phan Fah clearance has turned violent with explosions and apparent gunshots heard. At least 25 have been wounded, including police officers, one of whom was shot in the head.

The highest tension is now at the Phan Fah rally site of the Dhamma Army where many protesters are sitting and praying as the face several companies of police. The police appear to be waiting for orders to move forward. They have removed the barriers between them and the protesters which include monks.

(11:00) Police are now pushing forwards and protesters are pushing back. It appears that many arrests are being made. 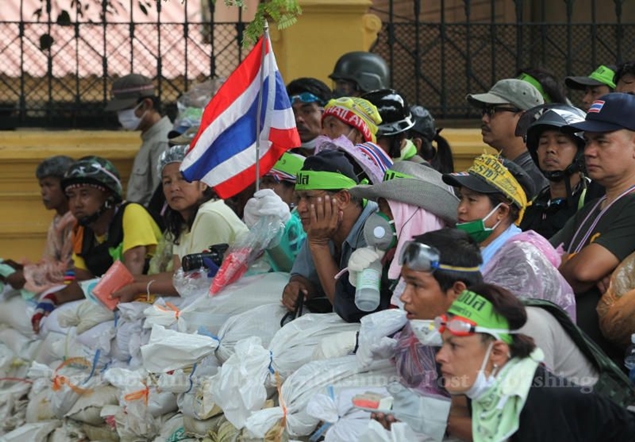 The main focus today is on the Government House area which rally leader Suthep Thuagsuban has vowed to defend. At the moment there is a standoff between a very large police force and a very large group of protesters led by Mr Suthep and several other top PDRC leaders near the Misakawan intersection. Negotiations are taking place but since police are demanding a complete withdrawal from the area, Mr Suthep and leaders from the Network of Students and People for Reform of Thailand (NSPRT) are unlikely to accept.

Meanwhile at the Chaeng Wattana rally site, tension has been lessened somewhat after Luang Pu Buddha Issara agreed to remove some barriers to allow traffic to flow more freely. 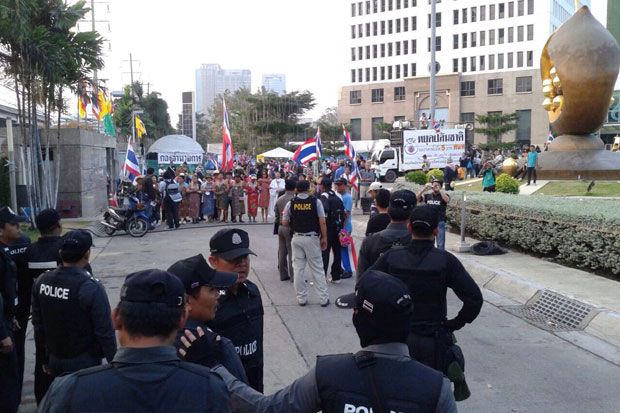 A line of women was all that stood between the police and the Energy Ministry compound. Post Today photo.

Police have already had one success. They have retaken the area around the Energy Ministry. The operation involved up to 10 companies of police who moved in when protesters refused to negotiate. There was no resistance and several rally leaders were arrested. 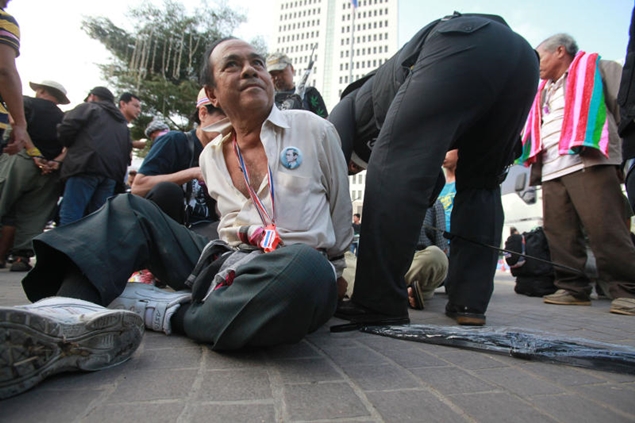 Arrests are made outside the Energy Ministry after police ended the occupation there. PORNPROM STRABHAYA 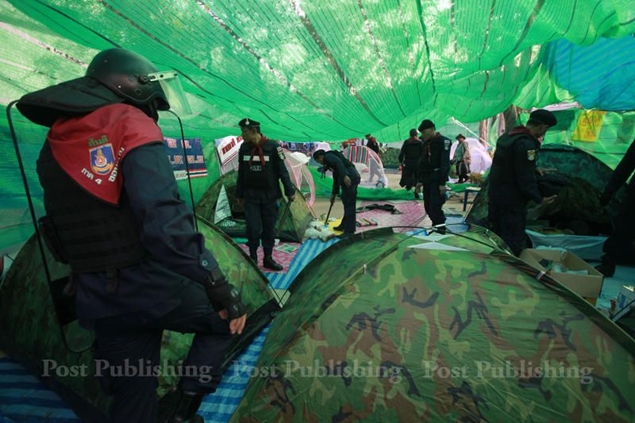 Police inspect the protester's tents after the rally there was forcibly ended. PORNPROM STRABHAYA 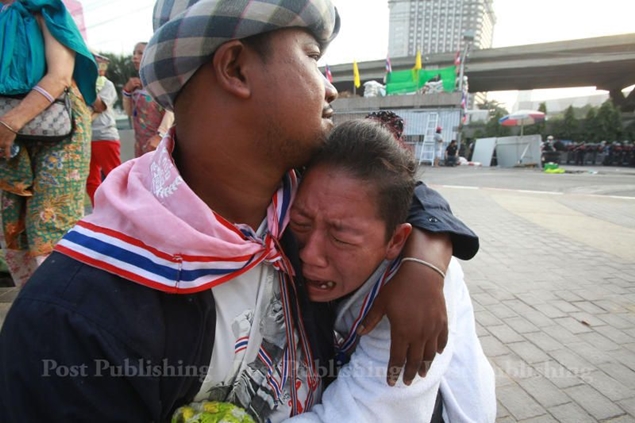 People's Democratic Reform Committee (PDRC) leader Suthep Thuagsuban says tomorrow will be the decisive battle against the caretaker government of Yingluck Shinawatra, but today looks likes it going to be very exciting as well.

The Centre for Maintaining Peace and Order (CMPO) has assembled a police force of 15,000 officers with another 10,000 in reserve to retake  five anti-government rally sites. The sites include the area around Government House, Democracy Monument and Phan Fah bridge, the Energy Ministry, the Interior Ministry and the Chaeng Wattana rally site of controversial monk Luang Pu Buddha Issara.

The police are in position and, according to CMPO director Chalerm Yubamrung, the whole operation will be televised on state-run TV channels 9 and 11.

As a result, there has been much early morning activity with protesters strengthening defences and their leaders sending large groups of reinforcements to resist any attempts to drive them out. 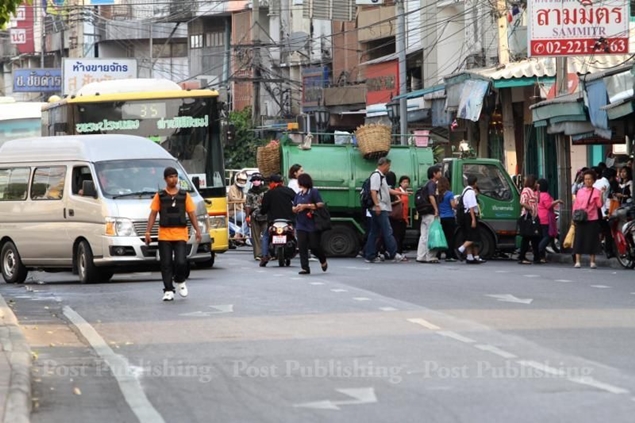 Guards at the Interior Ministry rally site have seized two buses and used them to block access to the compound. APICHART JINAKUL 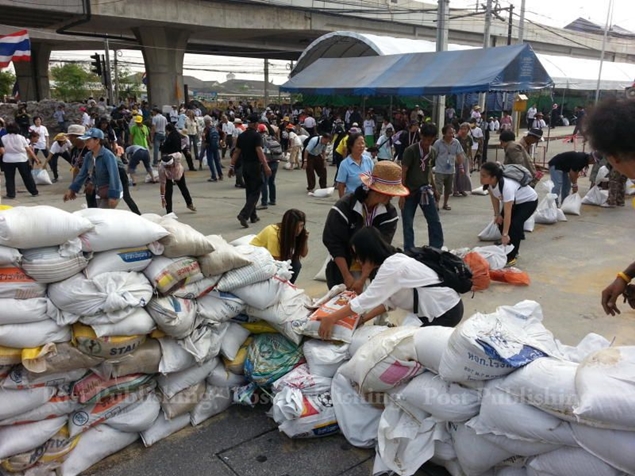 Protesters at the Chaeng Wattana site strengthen their defences this morning.

Mr Chalerm has stressed, however, that today the emphasis will be on negotiations to find a way for the protesters to leave the rally sites peacefully. Since many of the rally leaders have outstanding arrest warrants, the negotiations, if they take place, might have to be by phone, because if they are face-to-face, police would be duty-bound to arrest them.

No one knows what will happen today, so we will be watch events closely as they occur.

Third shot may be needed