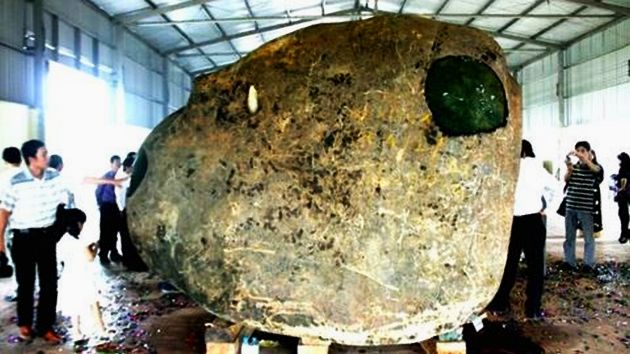 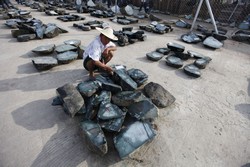 A trader looks at jade stones at Myanmar's 2011 Mid-Year Emporium for jade, gems and pearls at an emporium hall in Nay Pyi Taw on Dec 24, 2011. (photo by Reuters)

YANGON — An enormous jade boulder that could weigh up to 50 tonnes has been found half buried in restive northern Myanmar, and the government has sent troops to protect it, a state minister said on Friday.

The raw jade was discovered by villages and small-scale miners in the gem-rich region of Hpakant just over a week ago, but since it's still half buried, it's impossible to know its exact size, said Lajun Ngan Seng, the minister of resource-rich Kachin state.

He said authorities believe it may be 5.5 meters wide, weighing up to 50 tonnes.

"It's being guarded by soldiers," the minister said, adding that after it is completely unearthed, "We'll decide what to do with it.''

Myanmar is one of the world's biggest producers of jade, most found in the conflict-torn mountains of Kachin state, where ethnic rebels have been fighting the government for more than half a century.

The vast majority of the gemstones, considered to be of the highest quality, are smuggled over the border to China.

Hpakant has been closed off to large-scale miners since 2011, because of renewed fighting between government troops and rebels with the Kachin Independence Army (KIA). But individual miners and villagers, using rudimentary equipment, sometimes even their bare hands, have not stopped looking.

Dwut Lar, a church official with ties to the rebels, said that the government and the rebel group were in discussions about the giant jade rock. He said the insurgents were offered 10% of its yet-to-be-determined value, but rejected that as far too low.