Warfare in the capital? 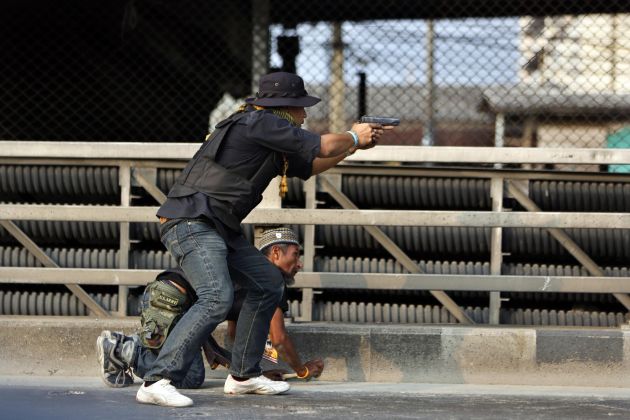 Men in black, from one of the two sides in Thailand's political conflict, in action. (Source: Reuters)

Fears escalate of 'warfare' in capital 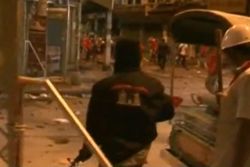 A photo that captures an unidentified armed man, one of the "men in black".

The upsurge in protest-related violence in recent days coupled with an announcement by the red shirts that they will stage a huge rally to ensure the survival of the Yingluck Shinawatra government is sparking concerns of "guerrilla warfare" being waged by armed elements from both pro- and anti-government sides.

Security sources say "men in black" from both sides could end up battling it out in Bangkok if the red shirts carry out their threat to stage their rally to protect the government.

"We don’t expect it to be an all-out civil war but men in black from the red shirts will come to wage a guerrilla war with the 'popcorn warriors' helping People's Democratic Reform Committee [PDRC] protesters," one source said, saying the military is not thinking about declaring martial law. 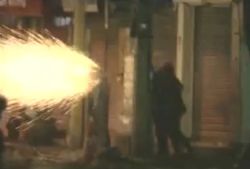 A photo that captures an unidentified armed man firing a gun, one of the "men in black".

An army source said army commander Prayuth Chan-ocha has asked caretaker premier Yingluck to persuade the red-shirt United Front for Democracy against Dictatorship (UDD) not to bring protesters to the capital. The problem is that there is a rift between the army and police, the source said.

It is believed unidentified armed men on the side of protesters and who were involved in clashes with police are soldiers and this has caused concern among police and those in the military who support the government.

"We hope that this rift will not widen,' the source said. 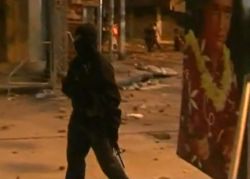 A photo that captures an unidentified armed man, one of the "men in black".

UDD leader Jatuporn Prompan said yesterday his group will make its biggest move next month when the National Anti-Corruption Commission (NACC) takes legal action against Ms Yingluck for her role in the government’s rice-pledging scheme.

"If we don’t come out now while the government is still the winner then the country will go the way of the ammart [elite]," Mr Jatuporn said without elaborating.

Ms Yingluck yesterday also condemned the weekend violence but insisted that she will not resign. "I will continue to do my duty until the last minute," Ms Yingluck said. She also offered condolences to the families of the victims and those injured in the violence.

Gen Prayuth said he has discussed the attacks with the prime minister, the government’s Centre for Maintaining Peace and Order (CMPO) and protest groups and called for the arrest of the people who used war weapons at demonstration venues whichever side they were on.

The military and the police had to take responsibility, and if violence continued it might get out of hand, he said.

Gen Prayuth said authorities are collecting evidence to speed up legal action against the violent groups.

The army has not acted as it was afraid it could increase casualties.

He noted some people misunderstood the army and were trying to obstruct the operations of soldiers.

Gen Prayuth demanded authorities arrest those who use weapons against demonstrators, officials and state offices.

"This does not mean that the military will use force to alleviate the situation without adhering to principles and laws," Gen Prayuth said.

"We must step together towards peaceful solutions and stop using laws to back fights," Gen Prayuth said.

Ms Yingluck said her government was not turning a blind eye to the attacks, saying that police have been ordered to track down the culprits.

Asked about the pressure being put on the Shinawatra family’s businesses, she responded with emotion.

"Won’t [they] even give me space to stand? I am trying to protect democracy," Mr Yingluck said on the verge of tears.

"Many people demand my resignation. But is resignation the answer? That would cause a vacuum and pave the way for the end of the constitution and that is undemocratic."

Suthep Thaugsuban, secretary-general of the People’s Democratic Reform Committee (PDRC), said yesterday that Ms Yingluck was insincere in her condemnation of the grenade attacks on demonstrators in Bangkok and Trat.

Regarding the prime minister’s comment that a third party was behind the violent incidents, Mr Suthep said she was accusing the military of launching them.

He demanded the military voice its stance and urged people to dismiss the UDD’s claim that the military was responsible for the violence.

Mr Suthep said he would not lead protesters into a civil war and if armed UDD members entered Bangkok, security authorities, not his PDRC, would have to deal with them.

He called for protesters to wear black for three days to mourn victims of violence and said protesters would gather at the Royal Thai Police headquarters tomorrow to call for justice for them.