Cheering when people are killed (video)

A police officer, whose duty is to uphold the law, pleased when innocent people are killed, including a five-year old girl.

Time for police to step up 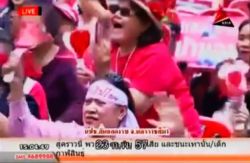 When Police Senior Sergeant Major Daeng announced that gunmen in two pickup trucks had hurled grenades and sprayed bullets and that people had been injured and killed, the audience shook their clappers, stood up and raised their hands in the air, cheerful, screaming with excitement.

A video clip has been widely circulated on social media. It was part of the “beating the war drums” meet(ing)ingof the United Front For Democracy Against Dictatorship (UDD) held on Sunday at the Chalerm Phra Kiat Sports Stadium in Muang district of Nakhon Ratchasima.

The three-minute clip began with an introduction to a man with a moustache and wearing a red plaid shirt. He was introduced as dap (Police Senior Sergeant Major) Daeng. He is also a UDD leader of the Chon Buri provincial chapter.

He stepped in front of the microphone on the stage with other provincial chapter leaders behind him. He took the mic and said he had good news to announce to the audience and to red-shirt supporters throughout the country via the Asia Update TV programme.

His good news was about how on Saturday night, gunmen in two pickup trucks hurled grenades and sprayed bullets at the People’s Democratic Reform Committee (PDRC) stage at Yingcharoen market in Khao Saming district in Trat.

When he announced that people had been injured and killed, the audience shook their clapping tools (clappers). Some even stood up and raised their hands in the air. They were cheerful and screamed with excitement. It was like what they heard was pleasing to their ears.

The policeman continued his speech, saying the PDRC protesters deserved what they got.

In my opinion, this reaction is unacceptable. It is inhuman.

A policeman, whose primary duty is to maintain law and order, was pleased that innocent people were attacked and killed. One of those bullets hit and killed a five-year old girl who happened to playing next to her mother who was not part of the protest, but worked at night washing dishes at a noodle shop.

The policeman continued with his “good news”, but was interrupted by two UDD core leaders. They said they understood his feelings, but they did not want anyone to be killed.

This response did not please dap Daeng. He raised his voice and asked: “Do you want to fight or not? If you act like that then I will stop my speech.” Then he walked out. He was angry. He clearly showed his support for the use of violence.

The action clearly represented the hard-core red shirts. They are in the same group of the UDD who have always said that they love democracy and they must protect the elected government. However, it is also they who cannot stand different political views and the anti-government protests.They cannot tolerate the opposition. They cannot handle challenges. It is ridiculous that they call themselves people who love democracy.

The hard-core red shirts act like mafia who can hurt or kill anyone they please. The incident in Trat was only one of a series of deadly attacks against the anti-government protesters.

According to Erawan Emergency Centre, there were 71 attacks during Nov 30 to Feb 24. More than 770 people were wounded and 21 people died including the girl in Trat, and two innocent children after Sunday’s grenade explosion near Big C Superstore in Ratchaprasong.

In contrast, zero seems to be the number of people responsible who have been apprehended in the capital by police.

How can top policemen still remain in their positions? Where is the action of the national police chief Pol Gen Adul Saengsingkaew and the Metropolitan Police Bureau Chief Kamronwit Thoopkrachang? Since the top policemen are not doing anything to ensure people’s safety, they should resign. [i.e. have accountability ]

It is sad to learn that policemen fail to protect innocent people. By doing nothing, it shows that police support the violence.

The police turn a blind eye when it comes to their primary duty — to guard people’s safety.

They must know that police do not have a duty to serve only one government, but to maintain the peace of the state.

Karnjana Karnjanatawe is a travel writer for the Life section.