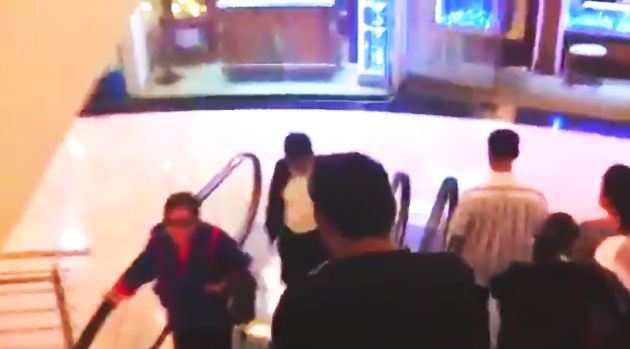 Thaksin's ex-wife (on the lower escalator) flees from Emporium mall with whistleblowers in pursuit. 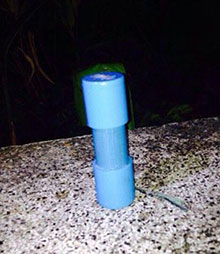 Image of a pipe bomb posted by Nattapol Teepsuwan on his Facebook.

Early Friday morning, a home-made pipe bomb was thrown into the house of core anti-government protesters who blew whistles at Khunying Potjaman na Pombejra. It failed to explode. Nattapol Teepsuwan, a co-leader of the People's Democratic Reform Committee (PDRC), revealed the attack on his home on his Facebook page at 2.20am Friday.

She said the blowing of whistles was not a violent act, but a social sanction, and could not be compared to burning the city, cheering when someone dies, or burning a coffin in front of the court.

Khunying Potjaman na Pombejra, former wife of Thaksin Shinawatra, was chased by anti-government whistleblowers inside a fashionable shopping mall in Bangkok's Sukhumvit area on Wednesday, and the incident was caught on video and shared online.

In the video, Khunying Potjaman is seen being harassed by a group of protesters led by Nattapol and Thaya Theepsuwan, co-leaders of the People's Democratic Reform Committee (PDRC), at the Emporium department store.

Khunying Potjaman rushed to her van in the department store's parking area. She was protected by her bodyguard, who came close to exchanging blows with the protesters. (continued below)

"My friend phoned me to say that Khunying Potjaman was shopping in a Louis Vuitton store at the Emporium," Mrs Thaya told the crowd at the Pathumwan rally site. "I wondered how can anyone have the desire to shop following days of tragedy, so my husband (Mr Nattapol, a former Democrat Party MP) and I decided to see if it  was really her."

Mr Nattapol said he decided to blow his whistle at Khunying Potjaman because he believed she is "one of the few people who can tell Thaksin that Thai people no longer accept the things he has done" .

"They're violating the rights of others. Khunying Potjaman and Thaksin were divorced a long time ago," Mr Surapong said.

"The PDRC leaders want others to respect their right to protest, but they infringe on other people's rights instead. This is unacceptable to society."

Noppadon Pattama, Thaksin's legal adviser, said the whistle blowing by protesters can be seen as a threat and a violation of other people's rights.

"Actually, Khunying Potjaman does not like politics and is not involved in politics. She and Thaksin separated many years ago and she is living a simple life like other normal people," Mr Noppadon said.

The lawyer said he was disappointed by Mr Nattapol and Mrs Thaya's "pathetic" actions, which would only lead to more hatred and division in the society.