In Korat, air force jet slides off runway during training exercise with Thailand, the US & Singapore. 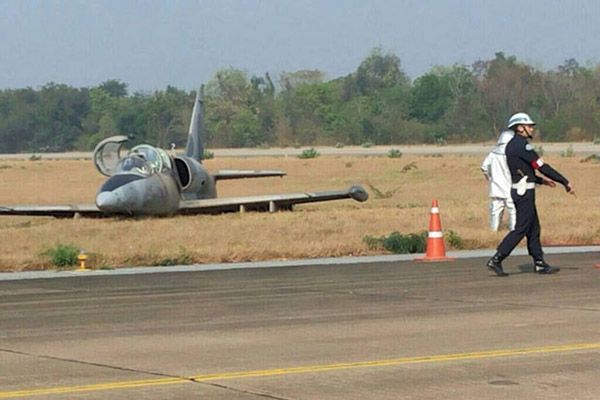 The crash-landed L39 training jet rests on the grass alongside the runway at Wing 1 in Nakhon Ratchasima, March 14, 2014 (Post Today photo)

An air force L39 training jet slid off the runway during an emergency landing at the Wing 1 Royal Thai Air Force Base in Nakhon Ratchasima on Friday morning. The two crew were not injured.

Air force spokesman AM Monthon Sutchukorn said two L39 trainers had taken off for a land attack exercise. One returned for an emergency landing. The jet skidded along the runway and finally came to rest on the grass area alongside the runway.

The two crew were safe. The two jets were based at Wing 41 in Chiang Mai.

The jets were taking part in operation Cope Tiger 2014,  a joint training exercise involving Thailand, the US and Singapore.

Air force investigators were dispatched from Don Mueang airport determine the cause of the incident.