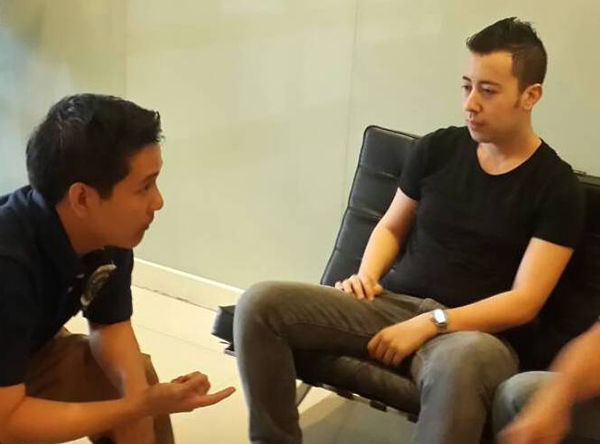 A police officer, left, talks to hacker Farid Essebar, right, who was arrested in Bangkok on Tuesday. (Photo by King-oua Laohong)

Thai and Swiss police have arrested the $4 billion hacker Farid "Diabl0" Essebar [See Wikipedia], who attacked Windows, then got out of jail and cracked Swiss banks, following a joint operation between Thai and Swiss authorities who have been tracing the man for more than two years.

Mr Essebar was captured by officials from the Department of Special Investigation (DSI), the Immigration Bureau, and the Office of the Attorney-General.

''We arrested the suspect at a condominium on Rama IV Road. Next Thailand will send him to Switzerland within 90 days in accordance with the extradition agreement,'' said Pol Col Songsak Raksaksakul, chief of the International Cases and International Crime Division.

The 27-year-old Russian citizen is wanted on a computer crime charges arrest warrant in Switzerland. He is accused of cracking banking computer systems and hacking bank websites in the country, causing damage worth more than US$4 billion or 128 billion baht to customers in Europe in 2011, the DSI official said.

Swiss police alerted Thai authorities to their hunt for the hacker through their embassy in Bangkok after receiving information that he and three other gang members had come to Thailand.

They were known to be travelling in and out of Thailand to Hong Kong and neighbouring countries throughout the past three years, he added.

DSI officials and police tracked Mr Essebar for about two years until they were certain that he was the one on the wanted list by Switzerland.

Mr Essebar and his accomplices spent money in several tourist destinations around the country but never gambled or bought any assets in Thailand, Pol Col Songsak said.

Mr Essebar, also known as Diabl0, has a Wikipedia entry on his hacking exploits.

Mr Essebar was arrested by the FBI and convicted of hacking. He spent one year in prison before being released, Pol Col Songsak said.