More+
Digital TV: What do I need to know?
Learning
Advanced news

Digital TV: What do I need to know? 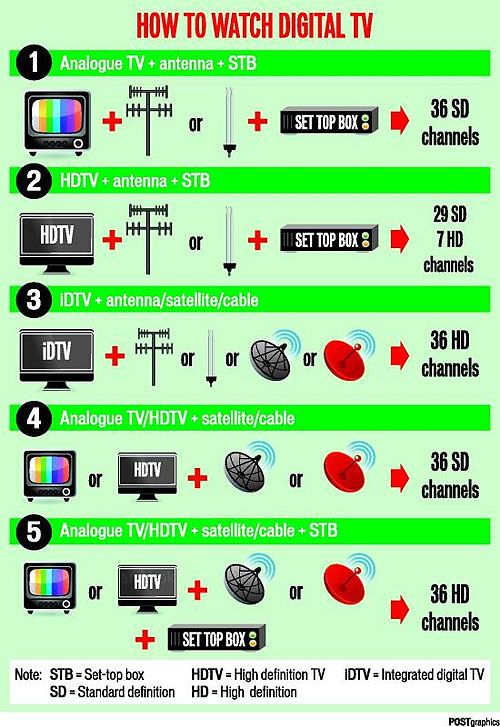 Thailand’s broadcasting industry is counting down to a phenomenal transition in the industry from the terrestrial TV platform to digitalisation which will begin its trial period early next month.

The country’s broadcasting industry started in 1955 with the black-and-white TV system before advancing to colour TV. The onset of digitalisation is seen as a major evolutionary step that will affect the entire industry, business operators and consumers nationwide.

Viewers are definitely looking forward to the migration, yet many are unsure of what it involves.

“Do I need to have a new TV set?” and “Will the transmission reach my home and am I eligible for a subsidised coupon?” are the main questions that many people are asking about the imminent change. Below are questions and answers that we hope will give readers a better understanding of the change to digitalisation.

The Thai broadcasting industry turned a new page after the introduction of digital TV and an auction for 24  commercial digital TV channels held in December last year. The auctions generated a total of 50.9 billion baht with winning bids averaging 2.3 times the starting price.

The National Broadcasting and Telecommunications Commission (NBTC) is in the process of approving licences for the auction winners of the 24 digital TV channels which will be finalised before the trial period begins in early April.

Digital TV is an evolution of the utilisation of radio frequencies in which efficiency will be way higher than that of the analogue system. With digitalisation, one frequency transmission can carry as many as eight to 25 channels while the analogue system can carry only one.

But why digitalisation? Firstly, digital TV allows viewers to get more channels with a greater variety of content such as news, children’s shows and more programming compared with the existing six free-analogue TV channels (channels 3, 5, 7, 9, 11 and Thai PBS) and this also includes cable and satellite. Digital TV broadcasters are expected to produce a higher quality and greater variety of content.

Moreover, the quality of sound and images will be improved with the digitalised platform with a reduction in interference.

Who can watch it and how?

All 22 million households who have television sets should be eventually able to watch digital TV by 2017. During the initial stage, viewers in Greater Bangkok, Songkhla, Surat Thani, Udon Thani and Chiang Mai will be able to watch digital TV channels while the transmission will expand to other provinces soon after. By 2017, 95% of total households are expected to be fully migrated to the digital format and the analogue system will then be obsolete.

There are many different scenarios you may face when moving to digital TV:

It may not be necessary for viewers in this category to purchase a new TV set and they can watch digital TV with the use of a set-top box (STB) as an antenna will act as a signal receptor.

Viewers will then be able to watch 36 digital channels while they will have limited exposure to the remaining 12 community channels as their accessibility will be based on individual regions such as northern, central, eastern, southern and northeastern region.

However, viewers with analogue TVs will be able to watch only standard definition (SD) platform while those with HDTVs are eligible to watch 29 SD channels and seven high-definition (HD) channels.

A set-top box (STB) is an information appliance device. The box will turn the source signal into content in a form that can then be displayed on the TV screen with the help of an antenna. Viewers are also eligible for the seven HD channels.

There is no need for viewers with an iDTV set to get a STB. They can view all 48 digital TV channels by hooking up the set with an antenna. iDTV is a television set with a built-in digital tuner.

Meanwhile, viewers will be able to watch the 36 digital channels with the exception of the 12 community channels that will be available according to individual local communities in each region. All 36 channels will be transmitted through HD platform.

Viewers will be able to automatically watch the 36 digital TV channels except the dozen community channels that will be available based on individual regions.

However, through the cable and satellite, viewers will be able to watch the content with only SD quality. If they want to upgrade the quality, they will need to get an STB to enhance the quality to HD.

What’s with the free TV channels?

Based on the regulation of simulcast period, channels 5 and 11 and TPBS will be required to broadcast their content on both analogue and digital platforms during the transitional period. And it is very likely that channels 3, 7 and 9 will also air their existing content on digital TV. So viewers will continue to receive the existing free TV channels. And by 2017 all channels are expected to broadcast through the digital system.

In order to ease the public’s burden for the migration of analogue to digital, the NBTC will provide a subsidy in the form of a coupon. Every household nationwide will be granted coupons which can be used to purchase either a new TV set or a set-top box to enable them to switch to digital content. The value of the coupon will be finalised soon.