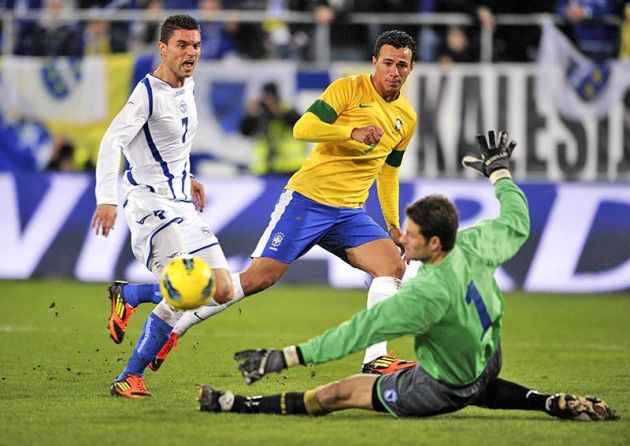 Brazil playing in a World Cup match four years ago.

The Administrative Court ruled yesterday that all 64 World Cup games do not have to be broadcast for free, siding with the entertainment company RS Plc, the owner of the broadcasting rights. The company will now proceed with its plans to broadcast 22 world cup matches for free. However, many football fans claim the matches on free channels are not attractive, as they do not include any interesting teams, particularly England, the favourite team of Thai fans. Traditionally, World Cup tournaments have been aired via free TV channels and viewers have not needed not to pay subscription fees.

The National Broadcasting and Telecommunications Commission (NBTC) will appeal the ruling. The NBTC earlier held that the so-called "must-have rule" required RS to broadcast all 64 games on free TV channels. The must-have rule has an objective to provide basic broadcasting service to every group of viewers, including the disadvantaged and low-income earners, but  RS secured the broadcast rights for both the World Cup 2010 and World Cup 2014 in 2005 before the must-have rule was effective. However, whether RS can sell its World Cup set-top boxes will depend on consideration by the NBTC's legal office. A source in the TV industry said RS has imported 50,000 set-top boxes but they have not gone through customs procedures pending NBTC approval to sell them.

The court yesterday ruled that the enactment of the must-have rule would violate RS's individual rights under the Intellectual Property Law.  However, the must-have rule, which requires seven major sports events to be broadcast on free channels, still remains, as it benefits the public, the court said.  The court held that, "public rights are important but they must not violate any individual right. It's unfair for any company to shoulder public costs to provide a public service."

Ground service staff working for Thai Airways International (THAI) plan to go on strike on April 13 to press for higher pay. The strike would happen at all airports in Thailand and union representatives claim that workers have the right to strike under labour law. If the strike happens, catering and ground services would be affected, including luggage loading and runway services.

The union is planning to convene a meeting of its members on April 12 and probably strike the following day because past negotiations failed to convince management to pay monthly salaries instead of daily wages to about 3,000 employees or to offer a 3-5% pay rise. The workers planning to strike work for Wingspan Services, a subsidiary of THAI. WingSpan Services employs more than 4,000 workers and only about 1,000 receive monthly salaries. Workers have not received a pay raise for three years. WingSpan Services outsources ground service staff for THAI and its work includes catering.

Acting THAI president Chokchai Panyayong said yesterday WingSpan Services workers should not hold THAI hostage. If they cause problems, the airline might use the outsourcing services of another firm. Mr Chokchai said THAI is considering changing its pay structure for staff. However, THAI uses outsourced workers to cut management and welfare costs, so it was impossible for outsourced staff to share the same benefits as THAI employees.

Leading exporters say that Thailand's cross-border trade is slowing because of unfavourable economic conditions overseas and growing competition, mainly from China. Cross-border trade accounted for 34% of Thailand’s total export value. Over the past several years, the figure has expanded by over 20% annually, but last year cross-border trade with China rose by only 1.4% to US$27.38 billion baht, while shipments with the four Southeast Asian nations that border Thailand expanded 5% to $59.31 billion.

Part of the slower growth was attributed to competitors such as China and other Asean countries improving their productivity and cost competitiveness in many sectors, which means Thai manufacturers need to respond by improving productivity to control production costs and focusing more on innovation to add value to the products, according to experts.  Thailand is a production base for personal computer parts, which account for 13% of the country's total export value. But global demand for PCs is falling. Threats to Thai exports also include possible trade sanctions by the US or EU over human rights violations in the fishery sector involving poorly treated migrant workers from neighbouring countries.

Foreign direct investment (FDI) to Thailand has also been declining, but for Vietnam and Indonesia, whose economies expanded by over 5%, FDI has been rising. For example Thailand failed to attract smartphone companies to set up a production base here, but Vietnam is now a global hub for smartphones. Board of Investment (BOI) approvals for investment privileges fell 61% year-on-year the first two months to 14 billion baht because of the ongoing political vacuum.