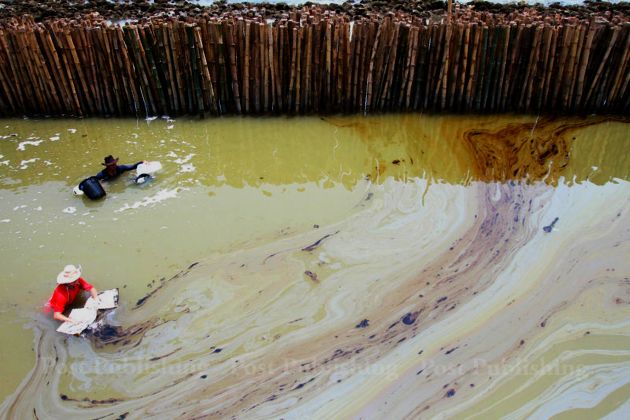 Workers try to remove oil from the Tha Chin River after a tanker sank near the river’s mouth in Samut Sakhon’s Muang district. Authorities were able to salvage the sunken vessel as efforts are under way to contain the oil spill which is threatening seafood farms in the area. Thanarak Khoonton

The Marine Department and local authorities have successfully salvaged a medium-sized tanker that capsized off the Maha Chai coast in Samut Sakhon and spilled oil ( oil spill ) which damaged a number of seafood farms in the area.

The department cooperated with local authorities and the owner of the capsized ship to salvage the tanker after it sank three days ago.

The Nopasin, 16m long and 4.5m wide, owned by Manas Nakwiset, sank about 3-4km off the coastal fishing area of Moo 8 in tambon Phantai Norasingh of Maha Chai on Monday evening. The ship was carrying about 60,000 litres of used oil.

According to local authorities, oil leaking from the sunken boat has spread across vast areas of the coast and affected local fishermen.

The oil has resulted in damage to more than 100 crab and shellfish farms in the area. Health authorities yesterday collected samples of marine animals from areas near Samut Sakhon out of fears the oil caused toxic contamination there.

Lab tests will be conducted to determine whether the marine animals have been exposed to chemical substances or particular carcinogens such as tar and benzene. Results are expected to be released tomorrow.

If toxic substances are found in levels harmful to human health, the ministry will issue warnings prohibiting people from consuming seafood that originated in the area.

Lab tests would be conducted every week until the situation returns to normal, said Dr Narong.

Local authorities have warned people not to swim in the area.

Mobile health clinics have been deployed around Maha Chai to provide basic treatment to people affected by the oil spill.