Monday's earthquake in the North measured 6.3 on the Richter scale and aftershocks, more than 180 so far, are continuing, prompting worries of future quakes. There are five active fault lines in the North. 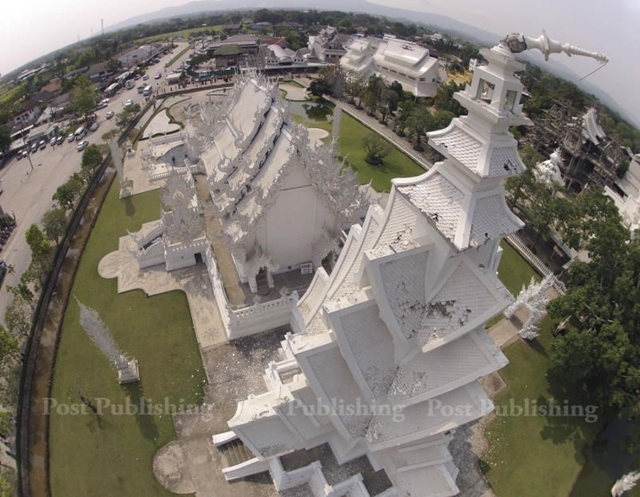 The all-white Wat Rong Khun, one of the top tourist destinations in Chiang Rai's Muang district, was badly damaged by the 6.3-magnitude earthquake that rattled the northern region on Monday. PATTARAPONG CHATPATTARASILL

Aftershocks have continued in the North, more than 180 so far. The 6.3 earthquake that hit Chiang Rai Monday evening is one of the biggest ever recorded in the Kingdom and there are concerns that more could follow.

The Department of Mineral Resources is closely monitoring five geological fault lines in the North after a 6.3-magnitude quake struck the region on Monday evening.

Worasart Apaipong, the department’s deputy chief, told a press briefing Tuesday there is a high possibility the next earthquake would take place at one of the active fault lines. 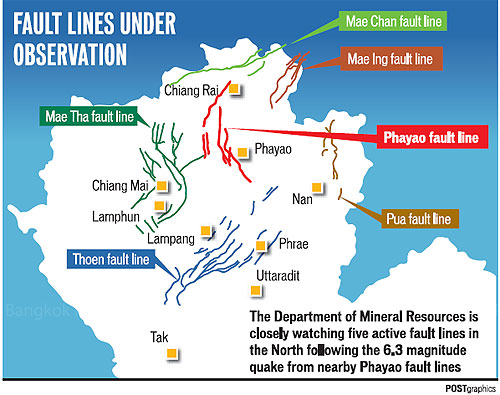 He said the epicentre of the earthquake, which struck at 6.08pm, was located on the upper part of the Phayao fault line, seven kilometres underground in Chiang Rai's Phan district.

The 70 kilometre-long fault line is surrounded by the other five fault lines.

"In theory, we believe that a big tremor at one fault line could affect the other fault lines nearby. We have all five fault lines under close observation during this period," he said.

According to the department, it detected a quake, registering 5.1 on the Richter-scale, in the lower part of the Phayao fault line on Sept 11, 1994. The quake had a strong impact on Phan Hospital.

The quake on Monday was the second to hit the Phayao fault line in two decades.

Mr Worasart said the department is also paying attention to landslide-prone areas during the rainy season, especially in the west of Chiang Rai.

An earthquake can cause rapid soil erosion, which can result in landslides.

The department has provided training for monitoring landslides and earthquakes to its networks, hoping that in the event of an emergency, a speedy evacuation will limit causalities, he said.

In case of a landslide, people living on a hill will be evacuated if the level of rainfall exceeds 150 millimetres per day, he said.

Preecha Saithong, the department’s geologist, said the 6.3-Richter-scale earthquake is considered to be one of the biggest recorded earthquakes that has taken place in the country.

Chiang Mai, Chiang Rai, Lamphun,  Phayao, Lampang, Phrae and Nan are the main provinces that stand to be most adversely affected by an earthquake on the five active fault lines in the North, he added.

"Monday's earthquake was not beyond our expectation. In our study, we found that a 6.5-magnitude quake had taken place close to the Thai-Laos border adjacent to Nan province in 1935."

"But we are certain that such a big quake will not happen again along the Phayao fault line for a long period of time,” he said.

For an earthquake to happen again along the same fault line, it will need more time to accumulate shaking power.

On the Pua fault line in Nan province, there has been no record of a major quake since 1935.

The only quakes registering between 3 and 6.3 on the Richter scale that have taken place over the past two decades in Thailand happened along the other four active fault lines. 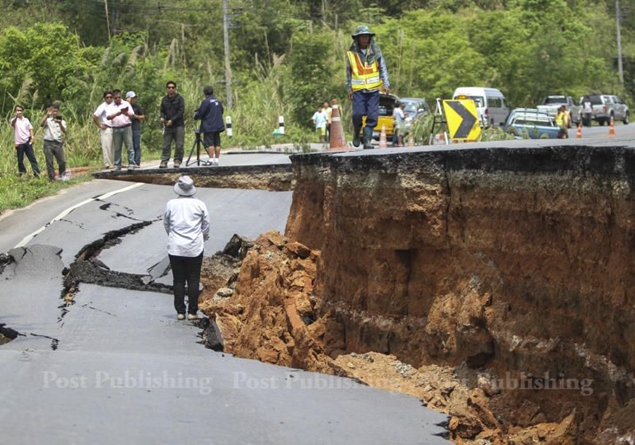 Here is more information on the damage caused by yesterday's quake and the more than 100 aftershocks from our online team.

Seven districts of Chiang Rai were declared disaster-stricken areas on Tuesday to facilitate quick assistance for people affected by the earthquake.

More than 3,500 houses, 10 temples, three schools, three hospitals, a hotel and a road were damaged there. 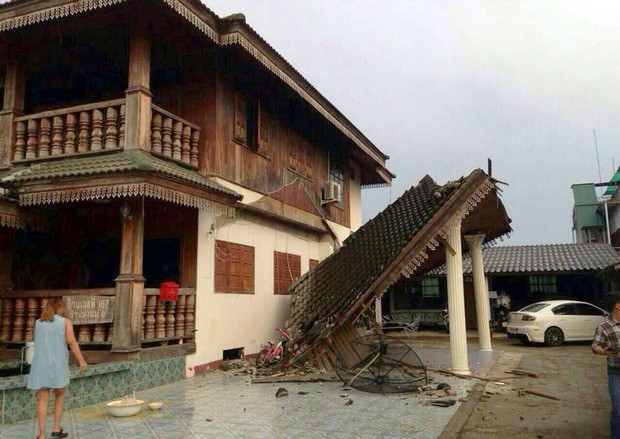 A woman looks at a partly damaged house following the earthquake. (AP photo)


Here is more information from our online team:

As of early Tuesday, the magnitudes of the more than 100 aftershocks ranged from slightly below 3.0 to 5.2 on the Richter scale, according to the National Disaster Warning Centre.

The quake and its aftershocks killed one person in Chiang Rai’s Mae Lao district and injured 20.

The centre posted on its website at 7am that the quake's epicentre was  in tambon Saikhao in Phan district, seven kilometres underground. There had been at least 109 aftershocks.

The largest aftershock, of 5.2 in magnitude, was felt in Mae Sruay district at 6.04am while the second largest, at 5.1 occured at 4.17am.

Thanarat Phummakasikorn, director of Srinagarind Dam in Kanchaburi, said the Electricity Generating Authority of Thailand had already inspected the two dams in the province — the Srinagarind Dam in Sri Sawat district and the Vajiralongkorn Dam in Thong Phaphum district.

The two dams had not been affected by the temblor. 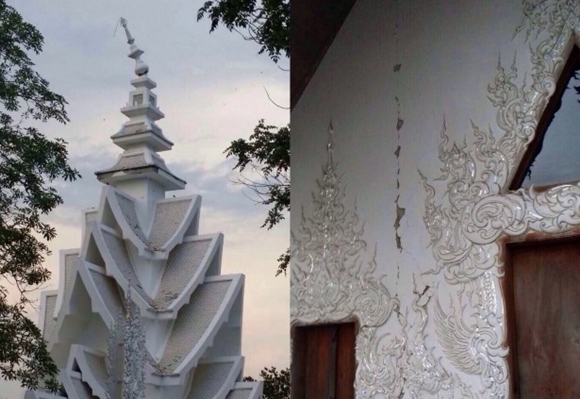 Damage to Chiang Rai's famous Wat Rong Khun is most noticable on the inside with many supporting structures suffering severe cracks.

Chiang Rai's famous Wat Rong Khun, also known as the White Temple, has been severely damaged. National Artist Chalermchai Kositpipat who designed and constructed the temple, beginning in 1997, said structural damage was substantial and some buildings might have to be demolished. The temple has been closed to visitors indefinitely. 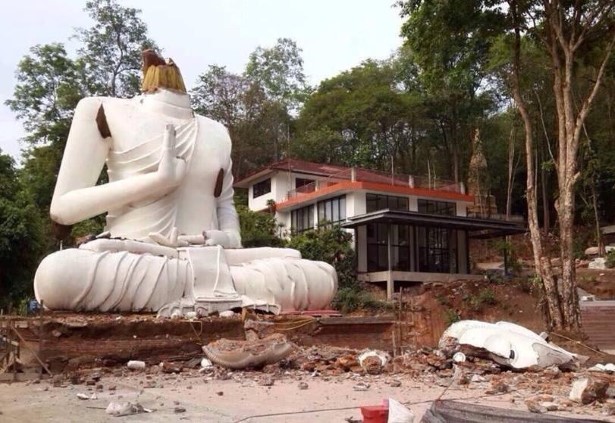 Information on the earthquake in the North continues to come in. The main shock occurred at 6:08 pm and it was recorded at 6.3 on the Richter scale, said to be the biggest, or one of the biggest, ever recorded in Thailand. The epicentre was in Phan district of Chiang Rai province and it's depth was only 7 kilometres, quite shallow for an earthquake, causing worry that there would be substantial damage. As of 8:30am this morning, the death toll stands at one, an 83-year woman killed by a falling wall, with 20 injuries. Many northern residents spent a sleepless night, some of them outside their homes, as aftershocks continued throughout the night. By 4:30am, the count was over 90 with four of them above 5.0 on the Richter scale. (8:30 update: There have now been over 100 aftershocks. Chiang Mai residents are reporting frequent tremors through the social media)

Substantial damage was reported to roads and temples and some hospitals were forced to close. The worst-hit area was in Phan and Mae Lao districts of Chiang Rai near the epicentre. The force of the quake was felt in high buildings in Bangkok.