Confusion as PM forced out (updated)

The threat of a political vacuum has lessened a bit today after the NACC indicted former PM Yingluck Shinawatra for her role in the government rice-pledging scheme, but spared her replacement and said it was not seeking the ouster of the cabinet. 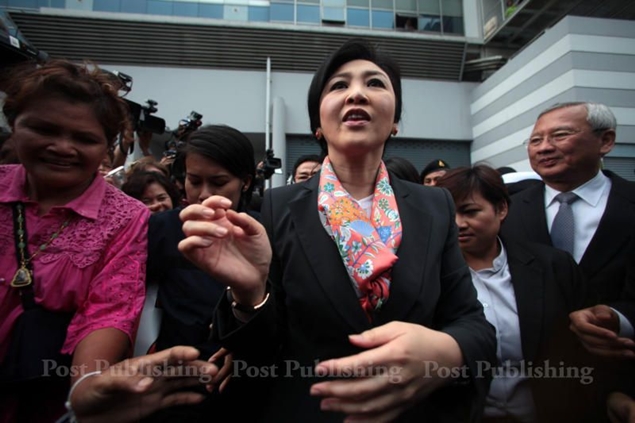 Former PM Yingluck Shinawatra greets supporters after losing her position as caretaker PM. Her replacement, Niwatthamrong Bunsongphaisan, right, may also have problems with the NACC over the rice pledging scheme. CHANAT KATANYU 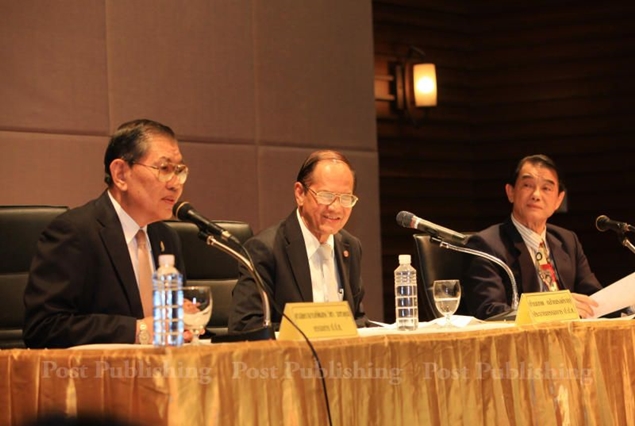 The National Anti-Corruption Commission (NACC) added to former PM Yingluck Shinawatra's problems, but it stopped with her, sparing her replacement, acting prime minster Niwatthamrong Bunsongphaisan. NACC spokesman Vicha Mahakhun also said media reports that the NACC would order the ouster of the entire cabinet were completely false. Here is the story of the NACC's decision from our online reporters:

The National Anti-Corruption Commission (NACC) resolved on Thursday to bring impeachment proceedings against former prime minister Yingluck Shinawatra over the rice-pledging scheme, with criminal charges to be the next decision.

The NACC ruled by a vote of 7-0 to send the case to the Senate, recommending the impeachment of Ms Yingluck. The commission found there were grounds for charges of dereliction of duty in her role as chair of the National Rice Policy Committee, NACC spokesman Vicha Mahakhun said on Thursday.

She had failed to halt the scheme after it was found to be incurring heavy losses due to possible corruption ''in all stages'', he said.

The NACC will forward the case to the Senate for impeachment proceedings. The case is expected to go to the upper house next week, he added.

It's not quite a complete political vacuum yet, but it is getting close as even the "acting" prime minister who replaced Ms Yingluck Shinawatra yesterday in under threat from National Anti-Corruption Commission (NACC). Here is the Bangkok Post's morning summary of the situation following her removal by the Constitutional Court. In addition, the Phue Thai party is asking people to protest the court ruling and the red-shirts say they will rally to oppose the appointment of a neutral prime minister.

The charter court ruling which ousted Yingluck Shinawatra as caretaker prime minister may have averted violent confrontations between pro- and anti-government groups, but it has not broken the political deadlock as opponents of the government push forward with other legal challenges.

The decision came after the charter court yesterday ruled to remove caretaker Ms Yingluck from office for violating the constitution in her transfer of Thawil Pliensri as secretary-general of the National Security Council in 2011.

The court also ruled that ministers who took part in the cabinet meeting on Sept 6, 2011 that passed the resolution to transfer Mr Thawil to the post of adviser to the prime minister also be removed from office.

Nine of them are in the current caretaker cabinet and they have been disqualified as a result of the ruling.

Democrat leader Abhisit Vejjajiva said the ruling could ease political tensions since the court decided to hand down a judgment before the mass rallies of the rival camps take place.

The PDRC had hoped the judges would throw out the entire Yingluck cabinet to pave the way for its proposed interim government and so-called “people’s council”.

In response, PDRC leader Suthep Thaugsuban brought the date of his “final all-out battle” against the government and the so-called Thaksin regime from next Wednesday to tomorrow. 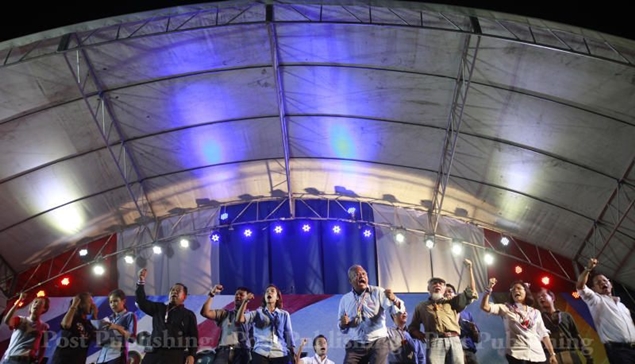 PDRC leader Suthep Thaugsuban has moved up the start of his “final all-out battle” against the government to tomorrow. THANARAK KHOONTON

He called on supporters last night to meet at Lumpini Park tomorrow at 9.09am. Once there is enough support, they would expand the rally to Ratchadamri and Henri Dunant roads, he said.

“This is the only chance we Thais have to rise up and celebrate our free spirit as the real owners of this country,” Mr Suthep said. He expressed confidence that by next Tuesday, the last remnants of the government would be gone. The PDRC rally is to take place before the mass protest by the pro-government United Front for Democracy against Dictatorship on Utthayan Road on Saturday.

Despite the charter court’s ruling against Ms Yingluck yesterday, she is not out of the woods yet.

A source on the National Anti-Corruption Commission (NACC) said the agency will decide today whether Ms Yingluck should be indicted for dereliction of duty in the rice-pledging scheme.

Mr Niwatthamrong could also face suspension by the NACC because he was directly involved in the rice programme.

Mr Phongthep said the cabinet meeting had agreed to proceed with plans for a new general election.

The government would seek a meeting with the Election Commission (EC) to discuss the matter tomorrow.

Senator Paiboon Nititawan, who led a group of senators petitioning the charter court for a ruling on Ms Yingluck’s status, said even if Mr Niwatthamrong has been appointed as acting caretaker premier, the post of prime minister is still vacant.

Therefore, he said such an appointment cannot stop the process to install a neutral interim prime minister to fill the vacant post, a process which should take no more than seven days.

Senator Kamnoon Sitthisamarn said he believed Mr Niwatthamrong will face complaints about him using his authority to forward a royal decree for a new election.

This is because Mr Niwatthamrong did not dissolve the House of Representatives on Dec 9 last year and he was not the person who issued the royal decree for the Feb 2 election.

Mr Supachai said the EC will proceed with the plan to hold the new poll on July 20, adding that whoever becomes the acting caretaker prime minister is duty-bound to submit a royal decree for the new poll for royal endorsement.