The woman forced into a taxi during a anti-coup rally was acting aggressively, police say, and they took her away to calm her down. Update: She and five others have now been released without charge. 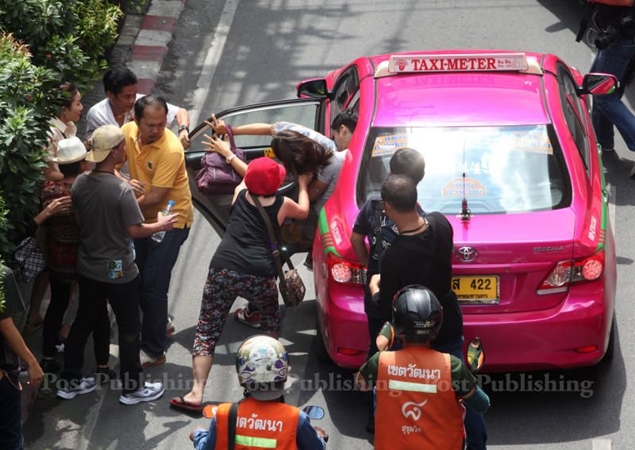 A woman is forced into a taxi by plainclothes police after she staged a one-person protest against the military junta on Sukhumvit Road on Sunday. THITI WANNAMONTHA

The woman who was forced in a taxi on Sunday has been released without charge, as have five others detained the same day. Here are the details from reporter Wassayos Ngamkham:

Three other protesters, all male, were held at the CSD to face charges.

Two of the women's arrests drew heavy and critical comments on social media Sunday and Monday.

One, Warin Thinakorn, 71, was jumped and held by four undercover police for flashing the three-finger anti-coup sign and wearing a home-made mask labelled "People", and then was taken away by motorcycle..

The other, identified as Sunantha Phuagsiri, 50, was forced, struggling, into a taxi to be taken off to police detention. She was seen flashing the anti-coup symbol before being pushed into the taxi and whisked away from in front of Times Square shopping centre on Sukhumvit Road.

Both were detained in front of dozens of local and foreign media, and numerous photos and videos of the arrests appeared on sites such as Facebook, often with derogatory comments towards police and the military coup.

All six of those released without charges on Tuesday were arrested Sunday for staging illegal anti-coup protests in the Ratchaprasong and Asoke areas, and outside Fortune Town shopping mall. They were held at Crime Suppression Division for two nights.

Military officers, who control all law enforcement under coup orders, submitted a letter to CSD investigators to confirm that no charges would be laid against the detainees, who should be released to return home.

Before their release, however, the officers "reproved" the group and "requested" each to sign a document promising not to participate in any future activities that might provoke unrest.

The Lumpini district police chief on Monday confirmed his undercover officers detained and forced a woman into a taxi after she staged a one-person protest against the military junta on Sukhumvit Road on Sunday.

Pol Col Chaiya Kongsub said the woman was taken away because she acted aggressively with the undercover police, who took her to the police station to “calm down”.

He identified the woman as Sunanta Puangsiri, 50. She was the first of six people arrested for violating martial law regulations during Sunday's anti-coup protest rallies held at various locations in Bangkok. All six were still held Monday at Crime Suppression Division.

Ms Sunanta was caught by photographers and video cameras as she was subdued by at least four plainclothes policemen, who said she resisted arrest. They tried to pull her into a taxi cab in front of Times Square Shopping Center at about 2pm Sunday.

The video drew wide criticism from social media users, who said the officers overreacted and never told her what offence she had committed. Some questioned the identity of the men in the video, but Pol Col Chaiya confirmed they were his undercover officers.

The Lumpini police chief said Ms Sunanta’s behavior appeared to be “more violent than other protesters” and the officers took her to the police station to calm her down and to prevent her from “violating NCPO orders too much”.

After that, she was taken from the police station by military officers for questioning, he added.

Military officers said they had yet to press charges against Ms Sunanta and five other protesters. 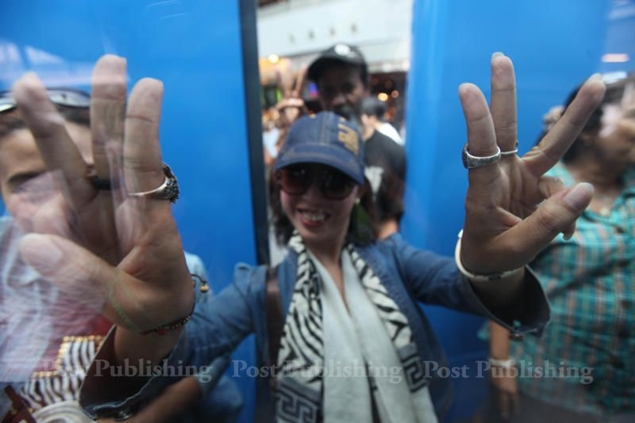 Anti-military demonstrators have opted for the three-finger salute as their symbol of resistance, but be careful where you use it. THITI WANNAMONTHA

Meanwhile the National Council for Peace and Order (NCPO) has vowed to take harsh legal action against anti-coup protesters.

NCPO spokesman Col Winthai Suvaree said yesterday the military is responsible for restoring peace so the country can move forward.

Col Winthai said security authorities would have no choice but to enforce strict law against the protesters.

In her commentary this morning, Bangkok Post Contributing Editor Atiya Achakulwisut thinks such action is counterproductive.

"The army chief has already turned himself into a despot by seizing all legislative and executive power. He does not need to add ruthlessness to his qualifications.

"He does not need to fuel pockets of resistance and fan them into a popular uprising either.

"It’s clear that people who are against the coup are not orchestrating a physical fight. They are not conducting street occupations or long-stay rallies.

"What they have opted to show is a symbolic resistance. They are contesting military might with viral messages.

"The best course of action for Gen Prayuth for now, therefore, is to do nothing."