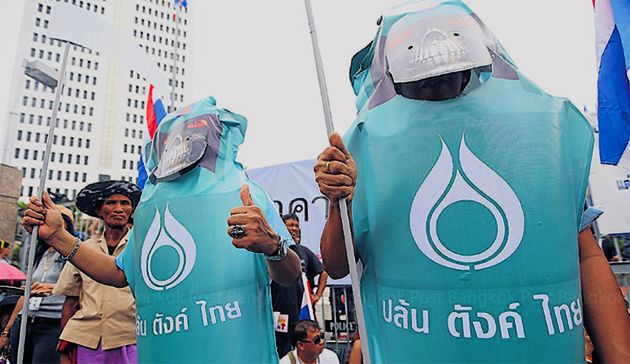 Protesters oppose the rise in cooking gas prices. Debate over energy price reforms has intensified in recent years as policymakers have called for an easing of subsidies. SEKSAN ROJJANAMETAKUL

Politicians are in the habit of keeping energy prices low to make voters happy. They keep the diesel price below 30 baht a litre by cutting the excise tax and they also subsidise the prices of liquefied petroleum gas (LPG) and electricity. As a result, the market is distorted and local consumption keeps rising. Thailand, a net energy importer, has seen its energy import bill surge while the Oil Fund shoulders huge losses for the subsidies.

The military junta last Friday announced it had no plans to adjust energy policies initiated by the previous government, and it allowed the cooking gas price to rise by 50 satang a kilogramme on Sunday from 22.63 baht as planned. But by Sunday evening, the decision had been reversed and LPG ordered cut by 50 satang with diesel kept at 30 baht a litre until energy price reforms could occur. The abrupt U-turn by the National Council for Peace and Order (NCPO) surprised some analysts.

Industry experts say price reforms must be the first priority of national energy policies no matter who is in power in order to reflect the real cost of energy and encourage more efficient consumption. For three years, diesel has been kept below 30 baht a litre by collecting only half a satang per litre in excise tax, costing the government revenue of 300 billion baht. Another 200 billion baht was used to subsidise LPG. Motorists using other kinds of petrol were unfairly paying high levies to subsidise LPG and diesel. The amount of lost state revenue would have been enough to construct mass-transit rail lines to reduce Thailand's oil imports. There are calls for government ownership in PTT to be cut to less than 49% from 65% to reduce political intervention.

The National Broadcasting Commission (NBC) has approved 40 satellite TV channels out of 90 to resume broadcasting, mostly those with entertainment and children content. Most of the cartoon channels such as Cartoon Club, Gang Cartoon, JimJam and Animax are among the 40 while many of the entertainment channels such as M-Channel, GrandPrix, JKN and Boomerang will also show normal programmes.

The TV stations that resume broadcasting would be allowed to carry six minutes of advertising per hour. The 40 channels approved this time have no complaint records. The NBC will screen another 50 channels which had earlier been accused by the Food and Drug Administration (FDA) and other agencies of false claims or illegal advertisements. It is likely that some political news channels might have to censor themselves or disappear while entertainment channels would be on the rise to return happiness to the public in line with the NCPO's policy. Shortly after the May 22 military coup, all satellite and cable TV channels were banned from airing. The cable TV channels, except some foreign news programmes such as CNN and BBC, were allowed to air a few days later. The NCPO had asked the NBTC to scrutinise the content of the satellite TVs before allowing them to broadcast again for fear of inciting or confusing the public.

The dual-track railway project will go ahead and the high-speed railway project will be subject to a new cost-benefit study, the junta has decided, as it looks into the past government’s transport and infrastructure spending plans. Other elements of the spending are likely to be reviewed, after National Council for Peace and Order (NCPO) chief Gen Prayuth Chan-ocha ordered state agencies to discuss the best ways to spend budgets secured by the past administration.

On Monday, Gen Prayuth chaired a meeting of his seven deputies and the National Economic and Social Development Board (NESDB) to discuss ways to help the economy after months of protests threatened to derail growth. Gen Prayuth has ordered agencies to study which projects under the 2-trillion-baht transport overhaul would most help the public. The projects’ environmental impact assessments (EIAs) and transparency must be taken into account. They also must undergo public hearings before they start. If the NCPO decided to go ahead with the high-speed trains, they would most likely be paid for as a joint investment between the public and private sectors, with funding support from domestic sources.

Gen Prayuth also said some projects under the 350-billion-baht water management scheme should press ahead. He also said the military could help with dredging work to speed up the projects. The NCPO attaches importance to water management in line with the royal initiatives, such as building water catchment areas known as 'monkey cheeks' to hold flood water, and the dredging of canals. In the past, the military took part in many government projects which helped keep costs down and ensured the projects met deadlines.