Brazil is also hosting World RoboCup 2014 with Thailand fielding a team. Robots have a long way to go but may challenge humans in a decade or two.

Football-playing robots eye their own cup, and beyond 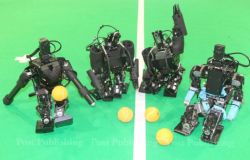 Soccer playing robots from the Hanuman team at King Mongkut's University Of Technology Thonburi (FIBO KMUTT) that will represent Thailand at the World RoboCup 2014 held in Brazil.

When robots play football, it looks like a game played by five-year-olds: they swarm around the ball, kick haphazardly and fall down a lot.

But robot teams have made strides in recent years, and some researchers believe the humanoids could challenge the world's best players in a decade or two.

"Maybe in 20 years we could develop a team of robots to play against the best World Cup teams," said Daniel Lee, who heads the University of Pennsylvania robotics lab, which is seeking a fourth consecutive RoboCup in Brazil next month, the premiere event for robotic football.

Robotic football, says Lee, is more than fun and games. It involves artificial intelligence and complex algorithms that help provide a better understanding of human vision, cognition and mobility. 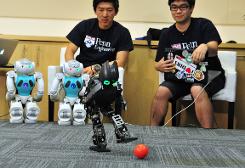 Students from the the University of Pennsylvania General Robotics, Automation, Sensing and Perception (GRASP) Laboratory observe as their robots play soccer during a live demonstration on June 12, 2014 at the New America Foundation in Washington, DC. (Source: AFP)

Similar technology can be used for robots that perform household tasks or search and rescue, and for self-driving cars, said Lee, who led a demonstration of his robot football team Wednesday at the New America Foundation, a Washington think tank.

Lee said robots have improved their game from a decade ago, having moved from four-legged doglike machines to two-legged humanoid forms.

But he said there is still a lot to be learned before robotic football can be competitive with humans. The robots in Wednesday's demo still moved awkwardly, sometimes failed to locate the ball, and often ended up in collisions or fell over on their own.

"We have machines that can beat us in chess," he said. "But we (humans) can still kick their butts in soccer."

Because the robots are autonomous, they need to be able to handle all kinds of tasks humans take for granted: finding the ball, responding to different light conditions and terrain, and determining the best strategy. 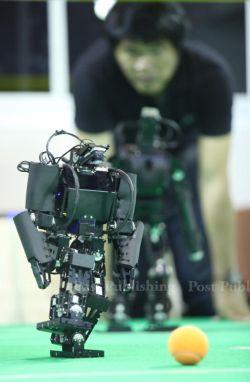 "Our robots are calculating everything terms of probability," he said, which means a human can outsmart a machine.

"In creativity, humans have an advantage."

The Penn student team took home the RoboCup in the Netherlands in 2013 for the third year running, after victories in Mexico City in 2012 and Istanbul in 2011.

Lee said the research draws from a variety of disciplines, from engineering to anatomy to knowledge of sports.

The biggest challenge is to develop the type of awareness and intelligence that athletes have.

"What is difficult is to understand the intent of the other team, that is what prevents us from being more sophisticated," Lee said.

And in addition to developing technology for individual robots, the researchers need to find better ways for the machines to communicate with each other to coordinate strategy.

Lee said all this requires "a deep understanding of intelligence," and added that "we are still many years away."

Hanuman is the name of the football playing robot built by students at King Mongkut's University Of Technology Thonburi (FIBO KMUTT) that will represent Thailand at the World RoboCup 2014 held in Brazil just like the World Cup.

The robot Hanuman recently triumphed at the 2013 Thailand Humanoid Soccer Robots Championship - the fourth consecutive year that the team won first prize at Thailand's most important competition in robotic technology. In 2015, Thailand will host the World RoboCup.