The United States were with seconds of the knockout stage until Silvestre Varela headed home a last-minute equaliser, keeping his team's chances alive. Earlier Algeria scored an easy and historic 4-2 win over South Korea. 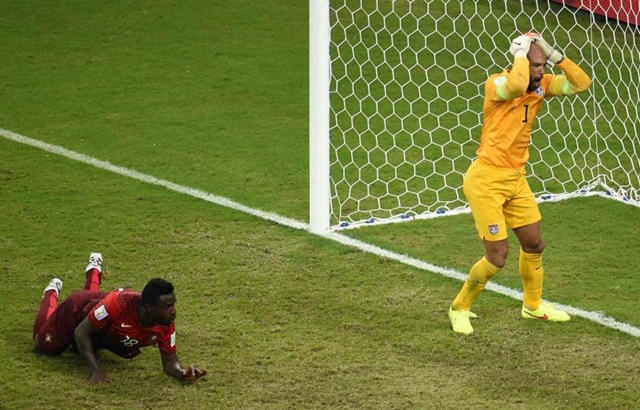 US goalkeeper Tim Howard (R) reacts after Portugal's forward Silvestre Varela (L) scored during a Group G football match between USA and Portugal at the Amazonia Arena in Manaus during the 2014 FIFA World Cup on June 22, 2014. AFP PHOTO / FABRICE COFFRINI

MANAUS, Brazil, AFP – A superb header by Silvestre Varela in the final minute of time added on saved world player of the year Cristiano Ronaldo and Portugal from crashing out of the World Cup finals on Sunday as it secured a 2-2 draw with the United States.

The Americans had looked to be safely into the last 16 after second-half goals by Jermaine Jones and Clint Dempsey saw them come back from 1-0 down – a goal by Nani – to lead. 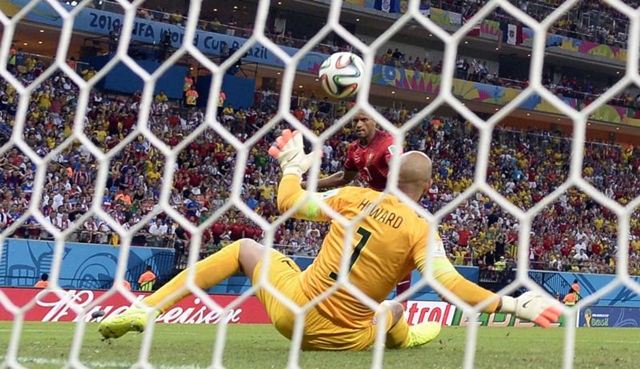 However, with only seconds remaining one sublime cross from a pretty anonymous Ronaldo was met by Varela and it soared past Tim Howard to give them a lifeline as a further defeat after the 4-0 hammering by Germany in the opening game would have seen them out.

The United States – who reached the last 16 in 2010 only to lose to Ghana – are on four points along with Germany, who they play in their final group game, and who their coach Jurgen Klinsmann coached at the 2006 finals.

Ghana and Portugal both have one point and play also on Thursday.

The Portuguese got just the start they needed to settle their nerves as a terrible defensive error by Stoke City's Geoff Cameron – the ball flying off his boot to Nani – saw the Manchester United winger wait for Howard to commit himself before rifling the ball into the net.

It had been pre-empted by an outrageous piece of skill by Ronaldo down the left side, completely bewitching three American players as they tried to corral him out on the touchline, only for a series of step overs and a backheel to see him squirm through the three of them. 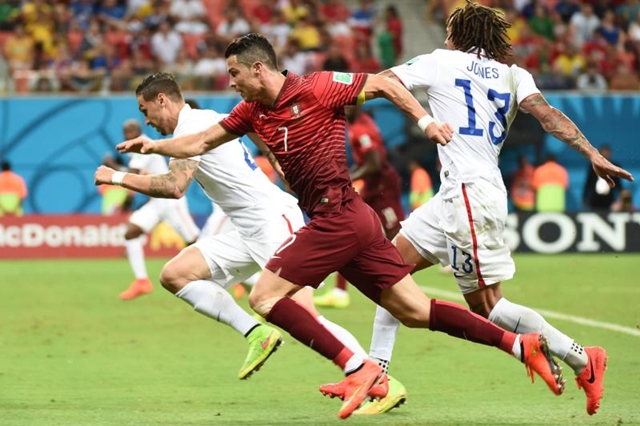 Conditions even in the evening were so draining that five minutes from the break, when Jermaine Jones received some treatment, the referee allowed both sides to rehydrate with a drinks break.

Howard, who was earning his 102nd cap, kept his side in the game on the stroke of half-time as he somehow managed to stick a hand out as he dived the wrong way to tip a point-blank shot by Eder over the bar.

There was an even finer block the other end 10 minutes into the second-half as Bradley's goal-bound effort from only 10 yards out saw defender Ricardo Costa spread himself to deflect the ball off his knee for a corner, earning a well deserved kiss on the head from goalkeeper Beto.

The Americans, though, deservedly levelled in the 64th minute as Jones produced a pearler of a right-footed shot from outside the area, leaving Beto rooted to the spot. 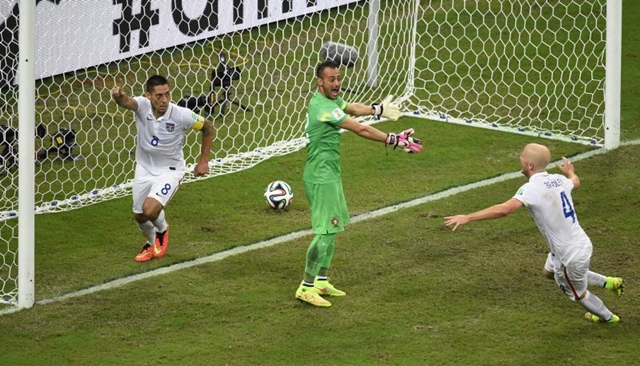 Ronaldo and the Portuguese appeared shell-shocked and it was the Americans who grabbed a second as Bradley's shot rebounded to Graham Zusi off a defender and his cross was put into the net by Dempsey's stomach for his fourth goal at a World Cup finals.

That looked to be that until, like Lionel Messi with his late goal against Iran on Saturday, Ronaldo summoned up one piece of class with his pinpoint cross, which was enough to break American hearts.

Algeria's players celebrate at the end of the Group H football match between South Korea and Algeria at the Beira-Rio Stadium in Porto Alegre during the 2014 FIFA World Cup on June 22, 2014. Algeria won 4-2. AFP PHOTO / PEDRO UGARTE

PORTO ALEGRE, Brazil, AFP – Algeria put themselves in pole position to reach the World Cup knock-out stages for the first time with a 4-2 win over South Korea in Porto Alegre on Sunday.

It was the first time an African team had scored four goals in a World Cup match and ended a 32 year win drought at the finals for the 'Desert Foxes'.

Yacine Brahimi's second half strike, sandwiched by efforts from Son Heung-Min and Koo Ja-Cheol, ensured Algeria moved up to second in Group H behind Belgium. 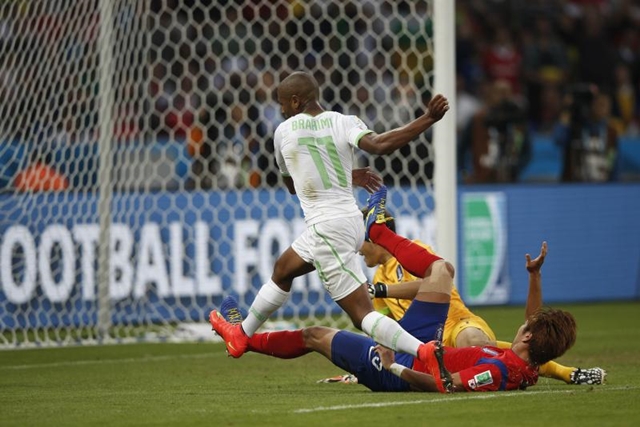 Having been knocked out in the group stages of their three previous tournament appearances, and not won a World Cup match in their last seven attempts, Algeria were looking for a lift at the Beira Rio stadium.

They were off to a dream start as Slimani, one of five changes from their opening 2-1 defeat to Belgium, muscled off Korea's two centre-backs to latch on to a long ball forward and jab home.

Within three minutes, Halliche had doubled the lead with a powerful header from a corner.

Djabou, another player promoted to the starting line-up, fired home the third as Korea's hapless defence once again went missing.

The Asians were a different proposition in the second half and quickly pulled a goal back through Son, who fired through goalkeeper Rais Mbolhi's legs.

Mbolhi then made a brilliant save to deny Ki Sung-Yeung as the Koreans continued to push before Brahimi virtually killed the game after finishing off a slick passing move. 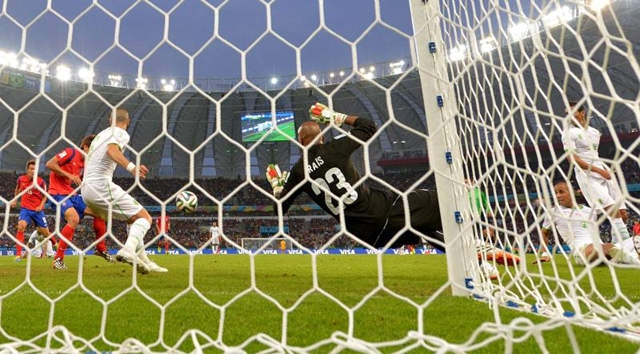 Koo slotted home a cross from Lee Keun-Ho but it wasn't enough to spare Korea's blushes, meaning they must now beat Belgium in their final group game to stand any chance of progressing.

Here is everything you need to follow the World Cup competition in English: http://bit.ly/RlaA3Y 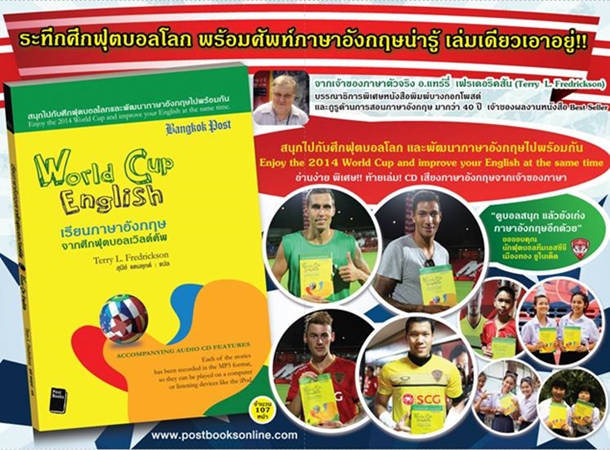