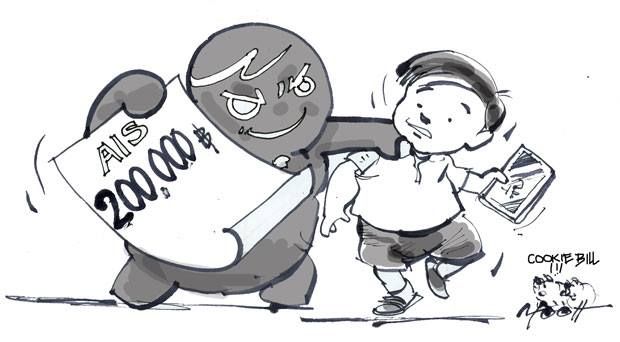 UPDATE: More stories of children racking up large bills playing games on their parents are emerging.  After her 15-year old teenage son played combat games on her phone for four days, a mother in Mae Sot, Tak received a phone bill for almost 600,000 baht. The bill for June actually only amounted to 614.46 baht, but the mobile phone operator demanded another 595,398.51 baht for ordered "products and services" and when she didn't pay the bill her phone service was suspended but the phone company eventually agreed to cancel the extra charges.

In another incident, a mother of an eight-year-old boy in Phetchaburi received a mobile phone bill of 163,405 baht this month. Her son had played a game on her phone during the school holidays and ordered items in the game because he had thought he could pay for them with his accumulated game scores. She had also earlier set a limit at 2,000 baht per month.

A shock bill run up by a child using a smartphone game has prompted calls to alert smartphone owners when they are close to reaching their usage limits.

The move comes after a farmer's child aged 12 racked up a bill of over 200,000 baht in mobile game charges with Advanced Info Service (AIS) as he purchased crystal items from Line's Cookie Run game.

The boy said he didn't know he would have to pay for the downloaded items, as it was added automatically to his mother's phone bill, despite the fact she had imposed a usage limit on the phone of 1,000 baht.

The NBTC also wants AIS to improve its direct carrier billing system, or over the top (OTT) service [extra charges on your phone bill for extra services or products].

The OTT service provides a product over the internet and bypasses traditional distribution. AIS is the only mobile operator providing the OTT service.

"We plan to discuss the issue with Google Thailand's executives and the mobile operators on Thursday," he said.

Meanwhile, Ampon Wongsiri, secretary-general of the Office of the Consumer Protection Board, said the office is considering a regulation to limit the age of mobile gamers.

Those who are still minors must get approval from their parents before being allowed to play games.

Pratthana Leelapanang, AIS's senior vice-president for digital products and services, said the company will waive the bill for the boy.

He admitted AIS had only set data usage and data roaming limits for mobile phone users. The limits do not apply to content and applications.

A warning message will now be sent when customers' data usage exceeds their package limits.

In April, AIS allowed customers using Android-based mobile phones to buy content and applications from Google's Play Store apps, enabling users to pay for the content they purchased in their mobile bills — instead of using a credit card or a debit card as they did in the past.

This appears to have been the source of the farmer family's problems, as paying for a download on a credit card is more transparent than getting a bill after the event to which the items have been charged.

Mr Pratthana said AIS will limit content and applications usage to 1,000-2,000 baht for post-paid customers. "In the future, we will allow customers to create their own usage limits," he added.