Mother dog feeds puppies with scraps from market everyday but one day their field next to the market catches on fire... 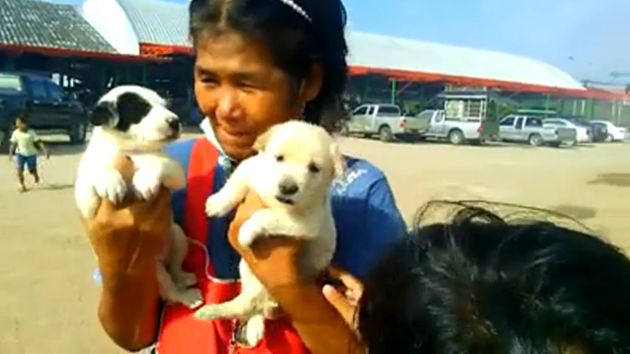 The market vendor in Cha-am and the two puppies she saved from a fire in a field next to the market.

PETCHABURI - Two puppies trapped in the middle of a burning field were saved by a 52-year-old food vendor on Saturday. The incident was caught on video and was shared on social media.

Ladda Chantabutr, a vendor at Meesuk market in Cha-am district, told reporters that she ran into the field next to the market as soon as she heard about the fire.

She knew about the two young puppies in the field, which was covered in tall cattail plants. She had previously seen the mother scavenging for  food scraps in the market almost everday, and she  took whatever she found back into the field.

One day, Mrs Ladda decided to follow the dog into the field and she found the two pups. Since then, she had frequently taken food to the pups and their mother.

"When I heard about the fire, I was worried for the puppies so I ran to save them. The wind was strong and the fire had almost reached their shelter when I got there," Mrs Ladda said.

"From now on, I'll take good care of them because I love them and feel a strong bond with them."

Netizens praised Mrs Ladda for having the courage to save the pups, saying many people would panic and forget about them. (continues below).

In another canine story, a dog named named Ma-kwid (wood apple) has become famous overnight after a video of Ma-kwid following its owner's directions went viral.

In the video, the golden retriever nods when its owner asks it to do certain chores like delivering things to different family members in the house. Ma-kwid might appear obedient, but is not so dutiful when asked to share a snack.