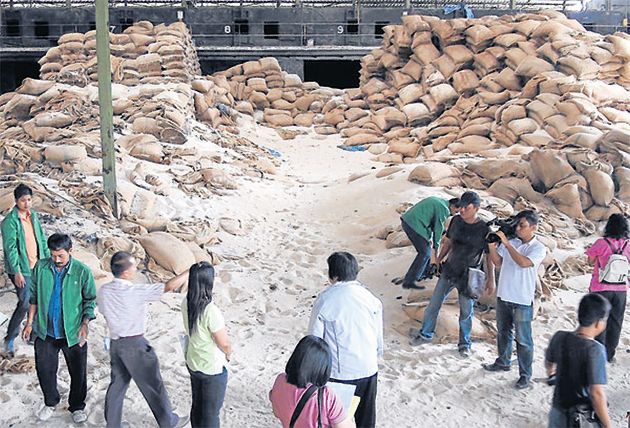 Many rice sacks lie scattered during an inspection by authorities at a warehouse in Nakhon Si Thammarat’s Thung Song district. The warehouse has caught fire three times – once in 2011 and twice in February and April this year. NUCHAREE RAKRUN

A warehouse in Nakhon Si Thammarat was found to be damaged by fire during a survey by inspectors yesterday. The warehouse stored 60,068 sacks of rice weighing 100kg each. The stockpile of rice was scattered about and a vast amount of rice was damaged by fire. The warehouse had caught fire three times on Mar 4, 2011, Feb 21, 2014 and April 5, 2014. The blazes were caused by a chemical reaction between aluminium phosphide and humidity.

After warehouse inspections in Suphan Buri no rice was found to be missing and rice sacks were stacked up neatly, showing that there are some good warehouses that could be used as models for others nationwide.

More than 100 teams are inspecting rice stocks at 1,800 warehouses nationwide, checking the amount and quality of the rice against official government records. The amount of rice in government stockpiles is a key issue in the pending corruption case against former prime minister Yingluck Shinawatra. As well as pledged rice that has been lost, the quality of rice must also be examined. Damaged rice may have been caused by leaked water, weevils or improper fumigation.

Myanmar's annual gem emporium had record sales this year. Sales reached the highest level since Myanmar started to hold annual gem sales in 1964. The auction of jade, gemstones and pearls generated income of $3.4 billion The emporium earned around $2.4 billion dollars last year, which was the highest in recent decades.

Improved access to the country and a rise in the price of jade has boosted gem sales revenue recently. This year's jade price was more than 20% higher than last year. An uncut lump of jade weighing nearly a quarter of a metric ton failed to make its starting price of $82 million dollar. No one dared to buy such a precious stone. Over 4,000 traders from Thailand, China, Hong Kong, and Japan attended the emporium this year.

Call for junta to deal with problem taxi drivers

The National Council for Peace and Order (NCPO) has announced a plan to reform and organise public transport. Bad service from some Bangkok taxi drivers is an issue that needs to be addressed. Professional and well-behaved taxi drivers may even be the norm, but there are many complaints heard everyday about bad taxi service.

Taxis at Suvarnabhumi Airport airport are a big business. Many taxis wait for passengers and because there are so many taxis in the queue, drivers can wait for three to four hours for their turn. Waiting for a long time makes them expect a big fare to make it worthwhile. If the destination is a short ride away, some taxi drivers can get upset. Some complain all the way, some vent their anger by driving dangerously, while others are simply rude. If they could kick the passenger out, they would do it, promptly. Not all taxi drivers do this, but most of them do. At the airport, many drivers expect to take foreign passengers who may be planning onward trips. Heavy tips from such tourists makes short-distance local passengers not worth the fare. Some drivers think a passenger is a foreign tourist and rush to help them to carry their bag, but once they learn that the person is a local Thai, they treat them as if they were invisible. The Airport Rail Link luckily does not suffer from this problem.

Mor Chit Bus Terminal in Bangkok suffers from similar taxi driver problems as Suvarnabhumi airport. Many drivers won’t charge according to the meter, saying the destination is far beyond their taxi service. However, if a person is assertive and confident and acts like they know the place like the back of their hand, they can often control such drivers. Mor Chit on Monday mornings presents special problems, as all drivers know that the terminal will be flooded with tourists and people from the provinces returning to work in Bangkok. So, the passenger queues are incredibly long with a handful of cabs trickling in. Other taxis wait outside the terminal, looking for passengers in a hurry to drive a hard bargain.